One of the over arching questions of cloning is obviously whether or not we should clone animals or humans, which can filter down into the question of just because we have the ability or technology to do it should we? Dolly was one of the first animals to be cloned, and the first animal to be cloned from an adult cell (“Cloning Dolly the Sheep”). Dolly wasn’t cloned for the sake of seeing if it could be down. Researchers were looking into the transfer of human genes into animals to produce certain proteins that are helpful in the treatment of human diseases (“Cloning Dolly the Sheep”). Other reasons for animal cloning include animals that produce higher-quality meat or milk, to use as breeders, and making potential drugs or vaccines (“Why Clone?”). The picture brings up an interesting consideration about improving the food safety and quality of our meat (http://animalscience.ag.utk.edu/utcloneproject/). 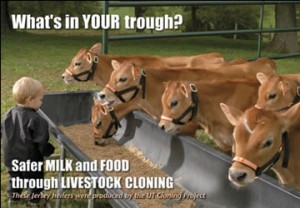 The above reasons don’t necessarily apply to human cloning, but are interesting nonetheless. It does not seem that animal cloning is a popular or common occurrences, however this viewpoint may change. Kass and Elliott both provide examples of other reproductive technologies that were originally seen as inappropriate that have become acceptable today. From this evidence, one could propose that cloning will become mainstream in the future.

Both authors bring up the moral issue of eugenics. Elliott mentions that cloning could allow for “many more opportunities for ‘positive’ or ‘negative’ selection” (Holland 151).  Kass mentions an article in The Washington Post where the author states, “cloning could help us overcome the unpredictable variety that still rules human reproduction, and allow us to benefit from perpetuating superior genetic endowments” (Holland 131). The evidence that Kass provides focuses on the possibility of forming a homogeneous super species, one that has all the best genetic qualities. There would be great benefit in having predictability in reproduction, something that could be positive or negative. Elliott’s evidence suggests that there are positive and negative sides to cloning an individual with desired characteristics. I agree with Kass’ statement in the fact that it would be great to have the healthiest and most robust genotype to survive, but how would we keep evolving as humans? Darwin’s experiments with finches would not have worked unless there were a variety of phenotypes to utilize. Darwin was able to notice which birds survive which conditions and how they adapted to their environment. Hypothetically speaking if we had an entire population of clones (neither pieces of evidence state this, but Kass’ support seems like it could support mass cloning) how would we as humans evolve and adapt to new surroundings? Just because a specific genotype is beneficial at this current time does not mean that it will be the best genotype twenty years later. “Evolution by natural selection benefits considerably from individual genetic diversity” therefore we will never know the best genotype because it will keep changing based on our environment (Holland 159). My conclusion may be a bit dramatic because it is based on the presence of an entire population of clones, but I believe it is still something that should be addressed. Cloning would reduce the amount of genetic variation within the species, which could have positive or negative effects down the line.