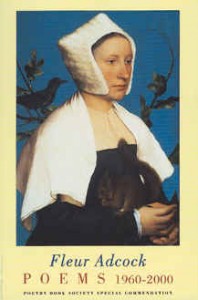 “I no longer feel inclined to make comments on my own work, which I feel should speak for itself.”
(qtd. in Feminist Writers)

Kareen Fleur Adcock was born February 10, 1934, in Papakura, New Zealand to Cyril John and Irene Robinson Adcock. She legally changed her name to Fleur Adcock in 1982. She spent most of her childhood (1939-1947) living and studying in England while both of her parents helped with World War II. After the war, her family returned to New Zealand where she received a degree in Classics from Victoria University at Wellington in 1954. At Victoria, Adcock met and married the poet Alistair Campbell in 1952. She gave birth to her first son, Gregory, just after she completed her B.A. degree. In 1956 she earned an M.A. The following year she gave birth to her second son, Andrew and in 1958 she and Campbell were divorced. Adcock took a job as an assistant lecturer in classics at the University of Otago in Dunedin, New Zealand and worked in the University library until 1961. In 1962, Adcock returned to Wellington to work in the Alexander Turnbull Library. This same year she briefly married writer Barry Crump. Her divorce from Crump in 1963 inspired Adcock to move from New Zealand to England with her five-year old son Andrew, leaving Gregory with his father. In London, Adcock worked as a librarian at the Foreign and Commonwealth Office. In 1975-76, Adcock paid her first visit to New Zealand since she left the country for London thirteen years before. Upon her return to London, Adcock took two creative writing fellowships, the first at Charlotte Mason College of Education in Windermere and the second at the universities of Newcastle upon Tyne and Durham. Since 1980, Adcock has worked as a freelance writer, producing her own poetry and translating and editing collections. She also delivers talks on poetry for the British Broadcasting Corporation.

Adcock’s poetry is characterized by images drawn from her immediate experience. Although the subject of her poetry often deals with personal matters, it is not confessional. “The content of my poems derives largely from those parts of my life which are directly experienced. Relationships with people or places; images and insights which have presented themselves sharply from whatever source, conscious or subconscious; ideas triggered off by language itself” (qtd. in Contemporary Authors). Her poetry is characterized by impressionability because of the ways in which Adcock links subject and tone with her immediate setting and surroundings.  Adcock is often referred to as “the expatriate poet” because her life has been split between New Zealand and England and both countries claim her as their own. “The awareness of the split in her life makes Adcock concentrate on the present, leading to rich description and clear imagery. She often focuses on particular places, immediate and concrete, to suggest that which is missing, using the present landscape as a backdrop for the ‘receding pictures’ it emotionally evokes” (Feminist Writers).

Adcock was trained as a classicist and much of her early work emphasizes structure, rhyme, and meter, as evidenced in The Eye of the Hurricane. Her first book of poetry contains reflections of her life in New Zealand, with a few poems written in England. Her second collection, Tigers, contains both new poems and the poems from The Eye of the Hurricane which she wanted to preserve. The poems in this book, such as “The Cave,” focus on the conflict between the necessity of her urban life and Adcock’s deeper desire to be free of society.

Beans grow well here, and little turnips.
Sometimes I find mushrooms
Or nuts, and every week I go
To the farm for eggs, cheese,
Salt and oatmeal.
Often they give me
Olives and figs as well.
It is half a day’s journey from here.
(I sometimes think of her
Shopping in the supermarket, fixed
Nervously by a shelf
Of tins, hesitating between three
Brands of coffee, in four
Different sizes.)

The subject of Adcock’s poetry is often unromantic, yet she provides a deeper, sometimes dark, twist on what appears to be a mundane situation. High Tide in the Garden, published in 1971, reflects a return to domestic concerns. She writes about the house in East Finchley which she had just purchased and several poems reflecting back on her son Gregory and her previous life in New Zealand.

The Scenic Route focuses on Adcock’s relationship with her Irish ancestors; the poems in this book are shorter and more imagistic than is typical of her style. Her earlier poems based on domesticity convey a feeling of familiarity; the poems in this collection are known as her travel poems and “cherish the variable physical details of a world viewed freshly” (Dictionary of Literary Biography). These poems integrate Adcock’s interior landscape with the exterior world that she is exploring.

Adcock’s next collection, The Inner Harbor, was written after a traumatic return to New Zealand. The book is divided into four sections and confronts the issues of love, death, and loss. In the final section, her poems reflect an acceptance and coming to terms with the losses that Adcock experienced thus far in her life.

Since 1980, Adcock’s poetry has broken new ground. She experiments with different voices and speakers, moving away from direct observations and into an exploration of the unconscious. Her themes continue to include ancestry/history, love, death, childhood, and sex.

The Debate on Postcolonial Theory and the Specter of Capital