As I walk around campus or around the city during the day, chances are that I have earphones in to listen to music. Going through a day without the presence of music is becoming increasingly rare for me. Despite today’s hits, the music that always manages to bring me excitement are those with nostalgic vibes from my childhood.

In the small range of years that you and I listen to music as adolescents, the music gradually works to mold and shape who we are,defining not only identities but even personalities and habits. During such an important period, extra caution should be extended to those experiencing first hand the effects of music.

The study done by New York Times analysis exemplifies that  according to the Spotify data analysis, men’s “most important period for forming musical taste is between the ages of 13 to 16” meanwhile “for women, the most important period is between 11 and 14” (The Verge). The plain fact that these adult women continue to adore songs from several decades ago shows the strong influential each song had in a childhood. The conclusion and results from the study did not really surprise me.

The years leading up to and during adolescence are the most influential to an individual. I know for a fact that my time during the latter part of middle school was when I found new interests. Kids my age were always trying to find their “thing.” A study in the U.S. and U.K. illustrates that the brain undergoes massive changes during adolescence, especially in social interaction. Nearly 300 people were continuously scanned from the age of seven, which revealed “dramatic structural changes during adolescence in four regions that help us understand the intentions, beliefs and desires of others, says Kathryn Mills of the Institute of Cognitive Neuroscience in London” (National Public Radio). She has led many research projects that focus on how the extent of a child’s social environment changes the cognitive and behavioral strategies well past adolescence. 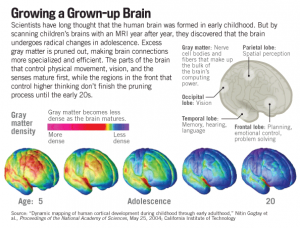 The maturity of the gray matter through the years

So why does the music continue through adulthood? My take on it is that because the brain is still maturing and developing during these years, it is also the time when adolescents are the most impressionable and receptive to new ideas. If you look on the picture, the adolescent brain is still not fully capable of cognitive thinking, so obviously they would be so impressionable at this age. Once they identify with an object, or even song, they would feel a sense of relatability to it. Therefore, hearing the songs even years later will probably induce a sense of familiarity and happiness. I believe these early years should be spent towards curating a healthier outlook. The music that kids choose at this age will probably stick with them to adulthood, where mental support and psychological perceptions of a developing child can take place.