What does a monument have the power to do? Monuments are objects of public history. They are organized and deliberate in their form and location. They can be abstract or concrete in representing their ideals and intentions. Because their construction is so purposeful, the feelings and emotions that they are meant to evoke are also purposeful. They can intend to demand respect, to honor a person or event, or to evoke memories of a person or event. They are objects of history, so they are also influenced by history. This means that they can change meaning, as is the case for post-apartheid South Africa and other histories where oppressive regimes are no longer in power.

As South Africa transitioned into democracy, the presence of monuments that are associated with apartheid and its leaders was questioned. Statues of leaders and tributes to Afrikaner culture existed across the country, and many black and colored South Africans associated them with the systematic oppression that they experienced as a result of apartheid. This led some to argue that the monuments and statues associated with apartheid be removed. The idea behind this is that the new government should remove monuments of the old government whose ideals and practices are no longer being supported. They believe that apartheid monuments are a symbol of oppression so why must they remain when the goal of transition is to eradicate the oppression. Some of those that are in favor of keeping the monuments want to do so to preserve monuments of Afrikaner culture. The FAK is an organization that was formed in 1993 with a goal of preserving the Afrikaner. They claim that these monuments are a legitimate part of the history of South Africa (Coombes 2003).

Other South Africans feel that the monuments should remain to serve as a reminder of the oppression that was such a prominent part of the apartheid era (Coombes 2003). This brings up some ideas about history and memory. How South Africa chooses to remember and write the history of apartheid will shape national identity in the future (Jacobs 2010). Collective memory is a social construction, as the shared past of South Africa reflects how they deal with the present and future. Bevernage (2012) discusses the relationship between history and justice. He talks about how because the concept of justice leads to a collective “duty to remember” (Bevernage 2012: 2). He introduces two ways of interpreting events of the past like apartheid, through the concept of irreversible and irrevocable past. The concept of the irreversible past implies that what happened in the past is over and can’t be changed. The concept of the irrevocable past states that the past endures in the future, and there is a lack of “temporal distance” from the past (Bevernage 2012: 4). Monuments of past regimes are a part of the irrevocable past, in that they continue in the present and future. They can serve to remind South Africans of apartheid. For some, this is distressing, as apartheid caused so much pain and suffering. For others, there is relief in the idea that apartheid will not be forgotten, and that the oppression that Africans in South Africa endured was recognized and changed. Decisions about how to deal with the past are made, and history is constructed by society accordingly.

Cecil Rhodes was born in 1853, in Britain. When he was seventeen years old he traveled to South Africa to work. He ended up working in the diamond mines when “diamond fever” was sweeping across the country, and eventually ended up monopolizing the diamond industry in southern Africa when he established the DeBeers Consolidated Mines in 1888 (Jacobs & Johnson 2011). Rhodes was also a politician in the Cape Colony, becoming their 6th Prime Minister, and used this political capital to ensure the success of himself and the other English and Afrikaans citizens of the Cape Colony (Hunt 1990). He encouraged British imperialism and formed the British South Africa Company, to which the British government allocated “certain exclusive rights to economic activities” in Southern Africa (Jacobs Johnson 2011). Through his successes and conquests, Rhodes has become a symbol of imperialism in Southern Africa.

Until recently, there was a statue of Cecil Rhodes at the University of Cape Town in South Africa. The statue was in the center of campus, overlooking the rugby fields at the base of Table Mountain. In March of 2015, a student named Chumani Maxwele took human feces and smeared it on the statue. As a student, Maxwele justifies his action by saying he “simply found it unbearably humiliating to walk every dap past a state glorifying an undeniable racist” (Harding 2015). Other students obviously felt similarly, and the Rhodes Must Fall Movement was formed. Students organized in protest to have the University of Cape Town take down the statue, claiming that it was a symbol of colonialism and oppression that had no place at the University. They rallied on campus and some even used spray paint to deface other monuments on campus. On the official website for the Rhodes Must Fall Movement, leaders of the movement declare that “the existence of the statue is only one aspect of the social injustice of UCT” and they call for “the fall of white supremacy and privilege at [the] campus” (http://rhodesmustfall.co.za). 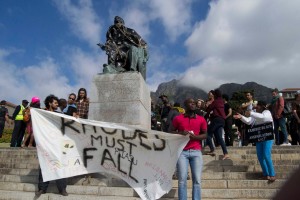 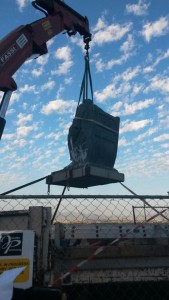 [the statue was taken down on April 9th, 2015. Photo taken from https://www.facebook.com/RhodesMustFall/photos]

The students who demanded that the statue be taken down felt that it was important to remove what they saw as a symbol of oppression on their university, where they want to feel safe and respected. However, not everyone, or every student, felt this way. Looking back at concepts of monument and memory, many felt that removing the statue serves only to try and cement colonialism in the past. The statue is only a piece of stone, and when it is removed the effects of colonialism and apartheid in South Africa remain. These people want apartheid to be a part of the irrevocable past, and they want the leaders of South Africa to continue to reverse these events at institutional levels. One student spray-painted the shadow of the statue on the ground below where it stood. This is a symbol of the fact that removing the statue did not remove the effects of what Cecil Rhodes helped to create. Still others think that the state should have stayed because of the generous donations made by Cecil Rhodes to fund the University of Cape Town and other universities (Nkosi 2015). However, when he was funding the University of Cape Town, it was a white university.

At the end of the day, this is about more than just a statue. It is about what the statue means, why it was erected, for whom, and what it means now. Clearly, monuments can have different meanings for different people. They are charged with political, emotional, and historic power.

Rhodes and the Pursuit of Power. The American Historical Review 95 (3).