We Sing Praises for Anushka Kapoor 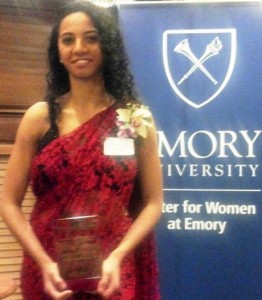 Anushka Kapoor, BBA13, was one of two undergraduate students recognized on March 7th with an Unsung Heroine award from the Center for Women at Emory.  This award goes to a woman who has demonstrated extraordinary dedication to issues that affect women at Emory or in the larger community, but whose efforts heretofore have not received accolades or formal recognition.  Anushka was awarded for helping to found Sexual Assaults Peer Advocates (SAPA), which has trained more than 700 students to date on sexual assault response and how to best empower survivors, on the Emory campus and beyond.

In addition to this recognition from the Center for Women, Anushka received additional awards as she approached graduation this past May.  She was awarded the prestigious Boisfeuillet Jones Medal, for good citizenship, outstanding leadership, devoted service to Emory and the community, academic performance, and potential to become a ‘Change Agent’ in her chosen profession and society at large.  Anushka was selected as one of Emory’s 20 Champions of Health Promotion and was a recipient of the “100 Senior Honorary” for demonstrating a deep commitment to her passion and for being considered outstanding in her contribution to Emory.  In addition, Anushka and the rest of the SAPA Executive Board members were chosen for the Knights of Emory Spirit award for their great contributions to the University and promotion of Emory spirit with passion and selflessness.

To learn more about SAPA, please view the What is SAPA? video.