This digital humanities project considers two forms of occupation in Japan: physical occupation in the immediate post-war period and cultural occupation, through images and media depicting blackness. Concerning the latter, I will explore particular spaces for popular representation in Japan: minstrel characters and their many reiterations throughout Japanese popular culture and hip-hop culture.

Though there had existed contact between African-Americans and Japan and the burgeoning Transpacific solidarity, the post-World War II occupation period brought African-Americans and Japanese people into prolonged proximity for perhaps the first time in history. In fact, in post-war Japan, the presence of African American servicemen was not an uncommon sight, most notably leading to interracial relations between black GIs and Japanese women, a topic explored in L. Alex Wilson’s 1950 article for the Chicago Defender, “Why Tank Yanks Go for Japanese Girls.” The article, published in one of the most reputable black newspapers of the time, explores the growing trend of African-American men coupling, marrying, and reproducing with Japanese women during the period of Japanese Occupation. This article highlights the existence of such marriages and births of mixed-race children, despite societal prejudice. In the context of my larger research project, this article illuminates not only the presence of African-Americans in Japan but the fluctuating power dynamics at play: on one hand, the black GIs occupied a position of power, acting as an extension of the United States Army, but were also subject to racial prejudice and ignorance. Arguing that the period of occupation is foundational when considering blackness in the Japanese imagination, the article highlights proximity between African-Americans and the Japanese, a proximity that I argue subsequently affected Japanese conceptions of blackness in media and culture.

In Japan, African-American men were allowed more freedom to express their manhood –intrinsically tied to their status as soldiers – in a militarized context. Wilson quoted Lieutenant Moorman, himself a black serviceman engaged to a Japanese woman at the time, as saying, “[The best type] of Japanese girl is loyal, devoted, thrifty, and a good homemaker,” ascribing to the Orientalist belief that essentializes all Asian women as docile and subordinate. Like the characterization of Japanese women as accessorial to men, American occupation of Japan was contingent upon widely-accepted conceptions of American superiority by American servicemen. In Emily Hahn’s “Morals are Different in Japan,” published in a 1946 issue of Negro: A Review, she writes, “[a home girl in Japan] can hope for no higher destiny than to bear children, preferably male, to her lord and master.” And again, in Lawrence Lacour’s “Laxity in the Navy” published in yet another issue of Negro: A Review, he writes of relations between American servicemen and Japanese prostitutes, “[the servicemen] would select a prostitute, pay… then go with the girl to her room,” reflective of the inherently uneven power dynamics between soldiers and Japanese women, despite a soldier’s social position in the states.

Undeniably, African-American men occupied a position of power when considering their presence as American soldiers, they were also subject to both the prejudice of racially-segregated policy and wide-spread colorist notions concerning darker skin in Japan. For example, during the period of occupation, it was commonplace for black soldiers to be referred to as kurumbo, a highly-derogatory Japanese racial slur for black. However, in the eyes of many soldiers, the racial politics and sphere of Japan was still better than that of the states, which was a belief shared by many in the preceding decades as Afro-Japanese solidarity was solidified; in the article, an unnamed soldier related, “In [Japan], we live like human beings, without suffering from prejudice and segregation.”

Further complicating the contact between African Americans and the Japanese were the San Francisco System – a bilateral system between the United States and Japan, among other countries – and the subsequent involvement of the United States in the democratization of Japan. This emerging relationship between Japan and the US not only involved the transfer of democratic ideals but also facilitated the spread of American conceptions of race and blackness.

With the entrance of the US into the Korean War, the bodies and physical presence of African-Americans in Japan may have retreated, travelling west, but memory and images remained. In John Russell’s “Race and Reflexivity,” he writes, “Japanese literary and visual representations of blacks rely heavily on imaginary Western conventions… ascribing certain standardized traits which mark [blackness] as Other… also serves the reflexive function of allowing Japanese to meditate on their racial and cultural identity in the face of challenges by Western modernity, cultural authority, and power.” The circulation of these images, working in tandem with historical conceptions around skin color and superiority in Japan, is perhaps best exemplified by the Sambo and other minstrel images in the Japanese imagination.

In 1960 Times article “Dakkochan Delirium,” then reprinted in the New Pittsburgh Courier, the author writes, “a black-skinned doll has shaken the tradition stoicism of the Nipponese here to an extent that sociologists believe that Negro culture now seems to be Japan’s one attraction,” reflective of the pervasiveness and effect of one such representation of blackness in Japan. As quoted in the article, Japanese novelist Tensei Kawano, states, ‘We of the younger generation are outcasts from politics and society. In a way we are like negros, who have a long record of oppressions and misunderstanding, and we feel akin to them.”

The circulation of the Dakkochan, much like the popular-in-Japan children’s book Little Black Sambo, reproduced extremely racist images of black minstrel constructions that became so embedded in the Japanese popular conscious, Mr. Popo, a character in the wildly-popular 1989 anime/manga Dragonball Z is yet another reiteration of minstrelsy. Mr. Popo’s blackened skin enlarged red lips, and sole tooth mirrors not only the Dakkochan but the extent to which minstrel images occupy the Japanese popular conscious. Mr. Popo in the show and manga, produced decades after the Dakkochan began being sold and the Little Black Sambo began circulation in Japan, is one such example of an enduring cultural image of blackness in Japan. 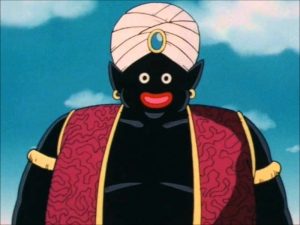 Perhaps one of the most prevalent ways of cultural presentations of blackness can be seen in Japan is through hip-hop culture, which emerged in the 1990s. Whereas before blackness was associated with common racial assumptions, Japan’s adoption of hip hop both fetishized blackness and negotiated Japanese identity. “Hip hop is globalized yet is ceaselessly remade regionally through its interaction with variant social, political, ideological, and other contexts,” writes Nina Cornyetz in “Hip Hop and Racial Desire in Contemporary Japan.” In Japanese hip hop, artists marry the aesthetics of a culture born in primarily black and brown communities in America with Japanese conventions, often operating of a fetishized image of blackness Here, one can see Japanese youth “[meditating] on their racial and cultural identity in the face of challenges by Western modernity, cultural authority, and power,” to quote Russell again. One such example of this is Keith Ape’s recent “It G Ma” 2015 hit; the song, ambitious and comprised of a trinational collaboration between Korean, Chinese, Japanese rappers, erupted onto the hip-hop scene. Kohh, the Japanese rapper, performs in his native language – at one point, even makes a reference to a Japanese cultural figure (Tashiro) – but adopts a stylistic delivery typical of African American hip hop. Additionally, he dons a golden grill over his teeth and holds a beer, performing a certain aesthetic associated with black rappers in hip hop. 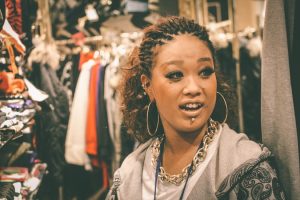 In instances such as the Sambo and It G Ma, blackness is reduced to images imported from abroad. Like the Sambo in the 20th century, contemporary Japanese hip-hop commercializes blackness or, rather, commercializes the popular conception of what blackness is. Salons dedicated to black hair styles reflect this – hairstyles such as doreddo hea, or the romanization of ダンサードレッドヘア and the Japanese translation for dreadlocks. On the website for Tracks, a dance studio dedicated to hip-hop influence street dancing, there is a page dedicated to black hairstyles which details many black styles, stating, “hairstyle affects the impression of the dance as much as the costume.” In such instances, black hair, rich with history, is reduced to aesthetic and performance. From the immediate post-War period to the contemporary moment, one can see the ways blackness has occupied Japan – both physically and culturally. From occupying a position of power during the Occupation of Japan to children’s paraphernalia to media, blackness is subject to both American racial prejudice – as seen in the export of minstrelsy – and Japanese conventions.