Enka is a highly ritualized form of Japanese cultural expression through music. It has been described as a “nostalgically framed collective [cultural] memory” (Shamoon 2014). But what happens when this expression of cultural memory is accessed, even created, by someone who would typically not be seen as a member of the very culture that Enka itself references so often in its nostalgic melodies and rhythms?

Enter Jero, a renowned singer of Enka. Jero is a Black male, raised and educated in Pennsylvania. Three-quarters Japanese through the lineage of his maternal family, Jero was raised amidst a strong presence of Japanese culture (Doerr & Kumagai, 2011). After graduating from the University of Pennsylvania and moving to Japan in February 2003, he rose to national fame as a singer of Enka after just two months. Breaking barriers as a black man that sang Enka in Japan, Jero occupied a unique space in his profession and played a pivotal role in shifting the positionality of the Black body in Japan.

For context, Japan has demonstrated a history of being selectively xenophobic; Japan has a history of accepting and absorbing some aspects of foreign cultures (loanwords, fashion, cuisines, etc.) while also rejecting others. I would cite Japanese discrimination of Zainichi, and even the obsession of a sub-sect of Japanese youth with chicano culture as examples of this xenophobia (Yamaguchi 2013, Park 2017). Despite these tendencies, Japanese fans of Enka loved Jero. They accepted him, forwarding opinions such as, “[h]e truly embodies the gentle spirit of Japan” or “[h]e’s Japanese because he sings Enka well” (Doerr, Kumagai 2012). Nonetheless, it seems admirable that Jero managed to resist Japanese nationalist pressure while staying true to his own culture. For example, it could be seen as covertly revolutionary that Jero performed Enka in “hip-hop” garb, namely loose, oversized clothing accentuated with snapback fitted caps (Doerr & Kumagai, 2012). He paid homage to both the Black community back in America and the Japanese community simultaneously while still being true to himself and his own upbringing and heritage. In fact, it was asserted that Jero’s success as an Enka singer came from his ability to seamlessly merge his Black upbringing and urban American lifestyle with his Japanese heritage (Doerr & Kumagai 2011).

Phenotypically incongruous with the standard “look” of Japan, Jero would certainly have stuck out, even if he were not a famous Enka singer. However, in this same vein, his Black skin came with certain stigmas and popular beliefs that were assigned to him by virtue of the color of his skin. In places like Japan where the population is largely homogenous, it is oftentimes the case that the locals in the area have only experienced outside cultures, ideologies, ways of living, beliefs etc. through what they are shown in the media. Speaking generally, this depiction of foreign culture tends to be accurate for only a very small portion of any given foreign culture; more often than not, the most marketable, extreme aspects of anything consumable by the populace is what is made visible or promoted. So how has Jero achieved the feat of navigating a Japanese space so well that they call him one of their own? 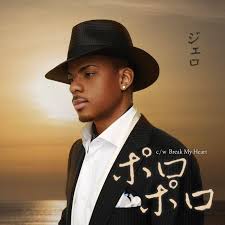 For one, he speaks Japanese, having studied Japanese in both high school and college. He also has the “advantage” of having a mother and a grandmother that are Japanese. Of all the available genres, he also sings Enka, which some have christened “the heart and soul” of Japan. For Japanese people to see a foreign body on stage singing in their language and displaying their culture is as much of a point of surprise and shock as it is a point of pride for them. Through his time as a singer of traditional form of Japanese song Enka, Jero has been able to occupy a position as an unofficial liaison between two cultures, two nationalities. This platform has allowed him to influence the positionality of the Black body in Japan, which in turn has led to a shift in the positionality of Black people in Japan. Before Jero, the idea of Blackness in Japan seemed to be inextricably linked to the American image with the additional imposition of expectations of athleticism, physical distinction (above average height and weight, referencing Japanese averages as the standard), sexually potency and wildness (specifically males), and musical ability (Doerr & Kumagai, 2011, Lebs 2015). More about this perspective can be found on the blog of Mr. Erik Lebs, a white “gaijin” living in Japan. Nonetheless, because of Jero, a large number of Japanese citizens have undergone a shift in their perspective on Blackness. Jero has demonstrated, at least from the Japanese perspective, that the lay Black individual is capable of a deeper level of understanding of Japanese culture and society. The Black body is more than just a vessel for artistic manifestations. The Black body is capable of navigating culturally sensitive spaces dominated by a majority. The Black body is capable of exemplifying excellence and defying stereotypes. Jero has smashed stereotypes as a Black man in Japan, and I thank him deeply for it.