All public lectures will begin at 5.30 PM and take place in the Woodruff Library Jones Room. 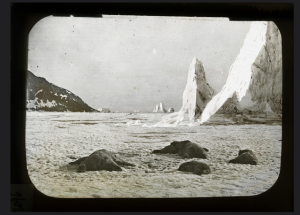 Ice was a subject of great fascination for nineteenth-century Americans. Probed by intrepid explorers, depicted in dramatic light by painters, and embraced by Transcendentalist philosophers as a potent ethical symbol, ice had an aesthetic all its own, one that crystallized issues at the core of American art and culture in a turbulent historical period.

This lecture defines and explores this aesthetics of ice through the work of William Bradford (1823-1892), named in the nineteenth century America’s greatest artist of the Arctic. It is the first chapter of five in a dissertation, each investigating single copy of the rare, luxurious book, The Arctic Regions, which combines the first photographs of western Greenland with narrative text by Bradford.

Entitled “Stillness and Movement,” the talk explores the geography of the specific copy of The Arctic Regions now at the Whaling Museum in New Bedford, Massachusetts, home of Bradford’s Quaker heritage and the heart of American maritime culture in the nineteenth-century. With revealing forays into the work Henry David Thoreau, who sought out Bradford’s studio in 1857 and mused on ice extensively, and Herman Melville, whose research for Moby Dick occurred on the Acushnet, a whaling ship owned by Bradford’s family, the presentation will also trace the course of the 1869 expedition that generated the book in the first place.

This geographic approach foregrounds not only how Bradford brought the Arctic home to America, but also how the representation of ice contributed to the understanding of ice and the Arctic that we have inherited today.

George Philip (GP) LeBourdais is a doctoral candidate in the department of art history at Stanford University. He holds a Bachelor’s degree from Middlebury College and a Master’s from Williams College and the Clark Art Institute. With a focus on the history of photography, he has published on subjects ranging from nineteenth-century landscape imagery to 1960s Civil Rights photojournalism. His dissertation, which has earned awards from the Samuel H. Kress Foundation, the Andrew W. Mellon Foundation and the American Council of Learned Societies, investigates the first photographic survey of the Greenland Arctic from 1869 and the transmission of that fascinating, challenging geography through photographs, paintings and lectures throughout the United States.

Nicholas Bauch, Stanford University
Enchanting the Desert: Visualizing the Production of Space at the Grand Canyon 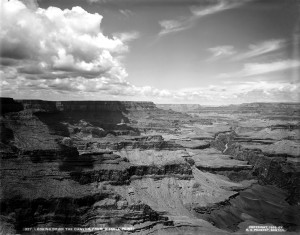 Enchanting the Desert is a digital monograph based on a single historical document: a slideshow made by commercial photographer Henry G. Peabody between 1899-1930 at the Grand Canyon of Arizona. The project reconstructs Peabody’s slideshow in an interactive medium, allowing readers to place the slides in a greater geographical context.  The photographs are used to open up the expanse of the Grand Canyon itself, laying bare the European-American project of remaking this space, focusing on specific territories within the vast region to tell the story in a spatially organized narrative.  When readers encounter this work, they can expect to uncover a pattern language that describes a new cultural becoming of this great landscape. Another layer on the palimpsest of meanings that have accrued here for nearly 10,000 years, the Euro-American experience of the Grand Canyon is yet an altogether new one.  Using the established medium of the website application, Enchanting the Desert introduces a genre of scholarship: the born-digital interactive monograph.  The medium allows for technical leaps impossible in a print publication.  The genre takes advantage of these leaps by performing spatial narrative in an inventive new way.

Nicholas Bauch is Geographer-in-Residence at the Spatial History Project at Stanford University.  He is a cultural geographer whose work brings digital techniques to bear on the art of landscape interpretation.  He is author of A Geography of Digestion (forthcoming, University of California Press), and Enchanting the Desert (forthcoming, Stanford University Press).  A recent experimental project is a kinetic sculpture he built called The Irreproducibility Machine.  He holds a Ph.D. in Geography from the University of California, Los Angeles.  www.nicholasbauch.com 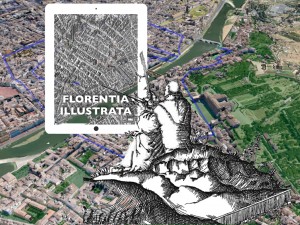 In Canto VIII of the Purgatorio, Dante describes a moment in which all Christians of his age were united by a sound that mourned the passing of another day.  But this ring from afar, this “squilla da lontano,” could also pierce the heart of travelers with a certain tenderness, uniting them in a common bond with the inhabitants of a far off city.  What Dante heard was the evening bell, part of a complex system of acoustic exchanges produced by bells and towers that demarcated both the temporal and the spatial jurisdictions of the pre-modern European city.  A city’s soundscape was as much an expression of its identity as it was a medium through which social relations were forged and negotiated through both ritual and transgressive practices.  And since the sound of an evening bell determined the limits of a city’s legal control of a territory and its symbolic presence within the psychological geography of its inhabitants, mapping such networks of sound can shed a great deal of light upon the mutual effects produced by buildings and bodies on each other.  This study focuses on Renaissance Florence, taking inspiration from Dante’s expression of the relationship between the sound of a bell, the evocation of a social topography, and the maintenance of a collective memory embedded with the architectural present.

Niall Atkinson is the Neubauer Family Assistant professor of Art history and the College at the University of Chicago. His research and teaching focus on the art and architecture of the Italian Renaissance with a particular focus on the experience of artistic environments and urban spaces in late medieval and Renaissance Italy. These fields have led him into investigations of the soundscapes of Renaissance Florence and the role of the acoustic environment in the meaning of built space and the construction of social communities. Currently he is exploring ways of using new digital technologies to visualize these acoustic and spatial relationships. Atkinson received his Ph.D. in the History of Architecture and Urbanism from the department of Architecture at Cornell University in 2009. After a year teaching at Texas Christian University he joined the faculty at the University of Chicago in 2010.

S. Wright Kennedy, Rice University
The Potential of Historical GIS and Spatial Analysis in the Humanities 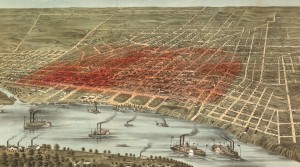 This presentation discusses the opportunities and limitations of the emerging historical geographic information systems (HGIS) approach to humanities research. HGIS is a flexible tool that can provide new perspectives and insights on a wide range of humanities topics by unlocking a large body of untapped spatial sources, essentially opening new windows through which we can explore and analyze the past. Specifically, this presentation compares and contrasts four geo-humanities projects. These projects include using HGIS to:

Through these projects, this presentation illustrates the variety of sources, scales, disciplinary focuses, critical versus conceptual constructions, and analytical techniques involved in HGIS research.

S. Wright Kennedy is a doctoral candidate in the History Department at Rice University. His primary area of interest is the integration of spatial perspectives into the study of nineteenth- century U.S. health and economics history. While earning his master’s degree in geography from California State University, Long Beach, he specialized in geographic information sciences and spatial analysis. His master’s thesis used historical geographic information systems (HGIS) to uncover the spatial origins and spreading patterns of the 1878 yellow fever epidemic in Memphis, Tennessee. From 2012 to 2015 he served as the project manager for the imagineRio project at Rice University (launch date February 2016). His current research focuses on New Orleans in the Gilded Age (1877-1910) with an examination of how health, environment, and socioeconomics impact urban and community development. His dissertation research employs HGIS to identify and analyze the spatial and temporal patterns of disease and socioeconomics at the individual, neighborhood, and community levels. 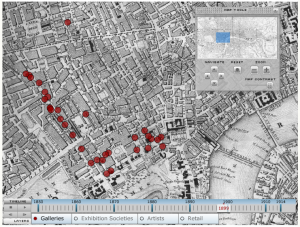 Over the course of the nineteenth century, the commercial art gallery came to dominate European and American art markets, transforming the experiences of artists, viewers, collectors, and dealers.  In this talk, Fletcher explores how digital mapping can help explain significant shifts in the art market and exhibition culture, and raise new questions about the experience and expectations of art for a wide public.

Pamela Fletcher is Professor of Art History at Bowdoin College, where her research and teaching focus on nineteenth-century art and the history of the modern art market. She is the author of Narrating Modernity: The British Problem Picture 1895-1914 (Ashgate, 2003), and the co-editor (with Anne Helmreich) of The Rise of the Modern Art Market in London 1850-1939 (Manchester University Press, 2011), and co-author (with David Israel) The London Gallery Project (2007, revised 2012), an interactive digital map of London’s nineteenth-century art market. She was recently appointed the first editor in the new field of digital humanities and art history for caa.reviews. 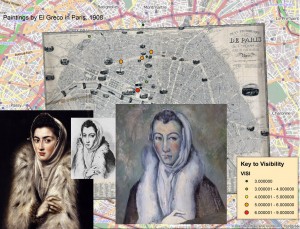 Many specialists have claimed that El Greco (1541–1614) served as an important source of inspiration for several seminal masters of French nineteenth-century painting, including Paul Cézanne (1839–1906). Yet there is little evidence that these avant-garde artists had the opportunity to study El Greco’s work first-hand. This lecture will outline this scholarly debate and demonstrate how geospatial technologies and analytical techniques offer a compelling means to explore El Greco’s contested legacy and discover new perspectives on the enduring issue of his influence.

Ellen Prokop is Associate Photoarchivist at the Frick Art Reference Library and an art historian who specializes in Spanish art of the sixteenth and seventeenth centuries. She is currently preparing two book manuscripts: an overview of the collecting and exhibition history of Bartolomé Murillo, El Greco, and Diego de Velázquez and an annotated translation of Fray Juan Ricci’s artistic treatise of ca. 1660, La pintura sabia. Her articles are published and forthcoming inThe Hispanic Research Journal and The Journal of the History of Collections. During her doctoral studies at New York University she held a Theodore Rousseau Fellowship from the Metropolitan Museum of Art, a research grant from the Fundación Carolina, Centro de Estudios Hispánicos e Iberoamericanos, and a Lila Acheson Wallace Fellowship from the university. Her post-doctoral research has been supported by the Samuel H. Kress Foundation, the Andrew W. Mellon Foundation, and the National Endowment for the Humanities. She regularly teaches undergraduate and graduate level courses at New York University and Hunter College, City University of New York. Prokop is the editor of “Discoveries in the Photoarchive.”