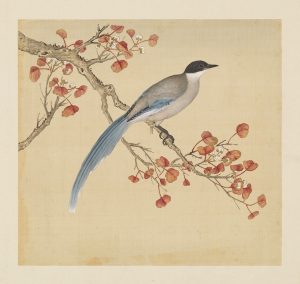 This lecture will introduce Greenberg’s attempts to incorporate GPS analysis into an art historical analysis of early modern Chinese natural history painting. The Manual of Birds (鳥譜, niaopu) is an ambitious encyclopedia of bird species produced in eighteenth-century China for the Qing court. Built upon a rich tradition of Chinese bestiaries but also in dialogue with early modern European natural histories, this book offers a glimpse into a Chinese court seeking to understand and envision the natural world, even as it sought to place these birds within the epistemic and geographical dominion of Qing empire.

In this lecture, Greenberg will describe the production of the Manual within the Qing court, showing how it relates to artistic and textual models in Chinese and European sources. He will then examine the role of animals, science, and natural history in the construction of European and Chinese empire. And finally, Greenberg will show how he is utilizing GIS mapping to place each of the 360 bird species depicted in this work into their present-day geographical ranges. Combining historical, art historical, and data analysis, Greenberg will argue that this project offers new analytical purchase on a wide range of Qing natural history paintings previously dismissed as purely decorative, showing how these images of animals and plants were used to assert dominion over the jungles, steppes, and mountains of an expanding Qing empire.

Daniel Greenberg trained as a field biologist at Rutgers University, and he has worked as an ornithologist for the Institute for Bird Populations in the Sierra Nevada Mountains and the World Wide Fund for Nature at their Golden Monkey Preserve in Western China. After two years of service as a US Peace Corps Volunteer in Sichuan Province, he studied at Nanjing University and the Graduate Institute of Art History at National Taiwan University before completing his PhD in Chinese Art History at Yale University. Greenberg has taught at Smith College and was an Andrew W. Mellon Teaching Fellow at Columbia University. He is currently a Visiting Scholar in the Department of East Asian Languages and Cultures at Columbia University. 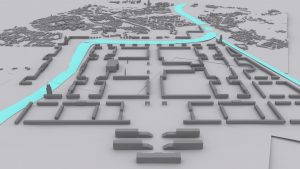 Krakow became a key location within the National Socialist plan for military expansion and the implementation of genocide in Eastern Europe during World War II. Here Hans Frank and the General Government he led developed their policies of oppression and occupation by establishing a formidable military and SS presence as well as claiming Krakow as “Germanized” again. Part of these schemes included plans for rebuilding Krakow, led by architect Hubert Ritter, which followed the goals of rebuilding cities established by Hitler for Nuremberg, Berlin, and elsewhere. At the same time, of course, Frank also established a ghetto (opened March 1941) for the Jewish population as part of the radicalization of policies that led to the genocide. Urban and architectural visualizations then and now help us to conceptualize these disparate histories together, seeing how the ambitions for establishing Nazi presence complemented and contradicted spatial planning for the Jewish community.

This presentation will, on the one hand,  analyze anew historical visualizations by Ritter and his staff, emphasizing the importance of urban and architectural plans as a means to help clarify goals within the Nazi occupation. Special attention will be paid to how Ritter developed from an important and experimental architect of the Weimar era into one of the architectural elite in the Nazi state. On the other hand, the presentation will extend this analysis through contemporary visualizations of these sources and others using digital methods. Addressing both historical and digital visualizations, the paper foregrounds what architectural evidence helps us do to interrogate the visibility or invisibility of specific groups within the racial policies and built environment of Nazi-occupied Eastern Europe.

Paul Jaskot received his PhD in Art History from Northwestern University. He teaches courses on architectural history, modern architecture and urban planning, and German art with a particular emphasis on National Socialist Germany. Jaskot is also the Director of the Wired! Lab for Digital Art History and Visual Culture at Duke University. His scholarly work focuses on the political history of Nazi art and architecture as well as its postwar cultural impact. He is the author of The Architecture of Oppression: The SS, Forced Labor, and the Nazi Monumental Building Economy (2000) as well as The Nazi Perpetrator: Postwar German Art and the Politics of the Right (2012). For the past decade, he has been a member of the Holocaust Geography Collaborative exploring the use of GIS and other digital methods to analyze the spatial history of the Holocaust. He contributed three co-authored essays to their volume, Geographies of the Holocaust (2014), the first book to address the analysis of Holocaust spaces with GIS. Currently, he is continuing his collaborative work in an analysis of the spaces of the Nazi ghettos of Occupied Europe, and he is engaged in a solo-researched project on the history of the construction industry in Germany, 1914-1945. From 2014-2016, Jaskot was the Andrew W. Mellon Professor at the Center for Advanced Study in the Visual Arts (National Gallery of Art, Washington, DC), and from 2008-2010, he served as the President of the College Art Association.