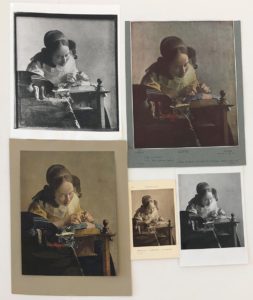 “The map is not the territory,” so the well-known dictum goes. The map is a tool, the usefulness of which is derived from abstraction: it emphasizes certain aspects of what it represents while deemphasizing, even omitting other aspects altogether. In the context of art history, an analogous statement might be “the image is not the object.” We understand that the photograph of the painting is not the thing itself but a representation. However, as digital images become increasingly central to the discipline’s practice, our collective understanding of the relationship between image and object, between map and territory, need to be reexamined and revised. Such a reexamination begins with asking fundamental questions about digital images, what they are, and how they represent.

Emily Pugh, Principal Research Specialist and head of the Digital Art History department at the Getty Research Institute, will discuss the ways in which the GRI’s DAH team is exploring relationships between imaging technologies and art-historical research and scholarship in projects like PhotoTech. The project uses emerging technologies such as computer vision to discover new research possibilities within the GRI’s Photo Archive. Existing at the intersections of art history, archival practice, and computational methodologies of analysis, the GRI’s DAH projects illustrate the broader ecosystem in which digital images are created, disseminated, and used as scholarly evidence. Through her discussion of the projects, Pugh will provide a framework for deeper exploration of shifting relationships between image and object.

Emily Pugh is a Principal Research Specialist and head of the Digital Art History department at the Getty Research Institute. She oversees scholarly components of GRI digital art history initiatives, such as the Ed Ruscha Streets of Los Angeles project and PhotoTech, a project to digitize 700,000 objects from the Institute’s Photo Archive. Prior to her time at the GRI, Pugh served as the first Robert H. Smith Postdoctoral Research Associate, a position focused on digital humanities projects, at the Center for Advanced Study in the Visual Arts at the National Gallery of Art in Washington. She received her PhD in Art History from the CUNY Graduate Center, where her studies focused on modern and contemporary architectural history. Her dissertation examined architecture and urban development in East and West Berlin during the time of the Berlin Wall and her book Architecture, Politics, and Identity in Divided Berlin was published in 2014. Pugh has received grants in support of her work from the Center for Architecture Theory Criticism History at the University of Queensland, the Fulbright/IIE Program, and the Foundation for Landscape Studies.