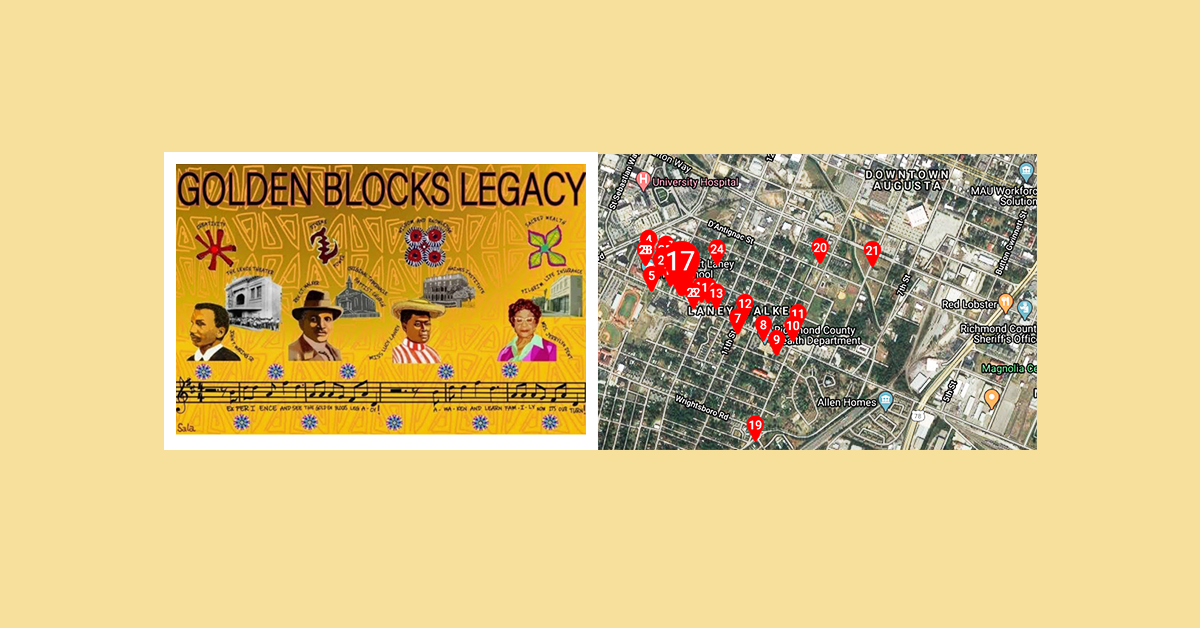 As recipients of a Digital Tour Initiative grant (through a partnership between Georgia Humanities and the Emory Center for Digital Scholarship), the Lucy Craft Laney Museum of Black History and the Greater Augusta Arts Council have developed a walking tour of key locations that comprise The Golden Blocks in the Laney-Walker District. This Augusta walking tour is a part of The Golden Blocks Project, which was named for the historic nickname of the business corridor near Campbell and Gwinnett Streets in Augusta, GA.  The Laney Museum and Greater Augusta Arts Council held an opening ceremony for The Golden Blocks Project on November 9, 2019, at which they announced and first displayed the walking tour of The Golden Blocks, created through OpenTour Builder.

This walking tour supports the endeavor to “create new public art connects us with the historical and cultural signiﬁcance of these areas.” As the Lucy Craft Lacey Museum writes: “During the time of segregation, the area nicknamed the Golden Blocks was the heart of Augusta’s black business community. Federal ‘Red Line’ policies prevented citizens from receiving bank mortgages within certain areas that were predominantly non-white populations, and businesses elsewhere in the city were allowed to discriminate against black patrons due to Jim Crow era laws. In the Laney Walker and Bethlehem neighborhoods, black-owned banks, insurance companies, theaters and other businesses worked to offset this discrimination and thrived, creating a strong sense of community.”

The Digital Tour Initiative was created as a partnership between Georgia Humanities (the Georgia state affiliate of the National Endowment for the Humanities) and the Emory Center for Digital Scholarship (ECDS). Through a continued partnership with ECDS, future historic tours of the greater Augusta region will be launched at the AugustaTours OpenTour.

You can read more about the Digital Tour Initiative in our March 2020 blog post announcing the call for grant applications or in our initial announcement of ECDS’s partnership with Georgia Humanities for this initiative.