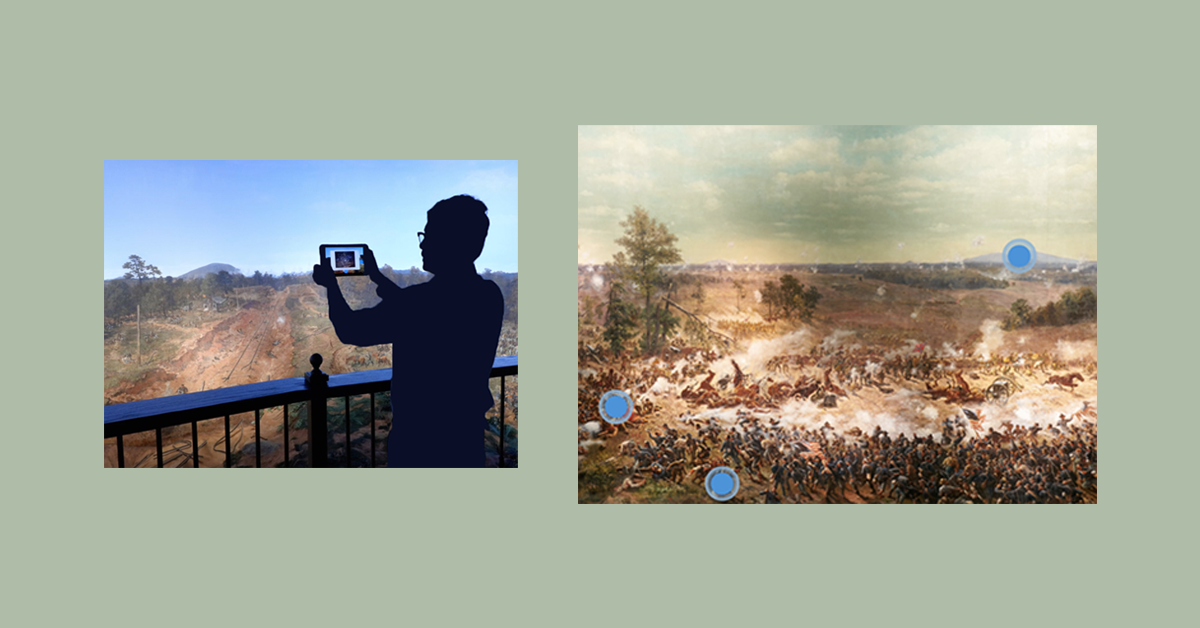 As announced in a previous blog post from January 2020, the Emory Center for Digital Scholarship (ECDS) has developed an augmented reality (AR) app for the Battle of Atlanta Cyclorama exhibit at the Atlanta History Center (AHC), with whom the ECDS has had an ongoing partnership. The Cyclorama AR Experience app identifies and illustrates significant points-of-interests (POIs) embedded in the painting and is available in app stores for iOS (Apple) and Android (Google Play). Steve Bransford, senior video producer for the ECDS, has produced a video about the AR app, which you can view by clicking this link or the embedded video below:

(You can access video captions by clicking the “CC” button on the video player.)

The video features footage of the Cyclorama’s installation, restoration, and public exhibition at the Atlanta History Center along with footage of ECDS’s Visual Information Specialist Arya Basu using the augmented reality app. This footage is accompanied by commentary from Basu and Gordon Jones, Senior Military Historian at AHC.

Jones notes that the AHC started their work with the Cyclorama in 2014. The project that “took place between 2014-2019 involved physically moving the painting from its 1921 building (that had been constructed in Grant Park) [into] a new location. So, we built a new building of the right size and we brought the painting back to its appearance in 1886.” He describes the Cyclorama, built in the 1880s, as the pinnacle of visual technology at the time: “its own sort of version of virtual reality. This was as close as people had to ‘seeing’ the Civil War” at the time.

Jones describes the AR app as “a key part of this [installation and exhibition] because it allows you to guide your own experience, and that is true to the artists’ original intent.” He elaborates that in the original 1886 version, “there was no motion – the platform doesn’t move, the painting doesn’t move: you the visitor, you move. You are the motion.” At the Cyclorama exhibit, you pick out what is of most interest to you, but without the aid of the AR app you might not have been able to “pick out, for example, the African American soldier on the horse in the back of the painting because it’s not a figure in the foreground and it’s not particularly noticeable. AR helps you to pick out those little stories that are particularly revealing and could be insights into what the artists were thinking and maybe what their audiences were looking for that you might not otherwise notice.”

Even in the physical format, the Cyclorama is a unique experience, and the AR experience had to also ensure a seamlessly unique experience to match. Doing so required rethinking the AR tracking strategy, as Arya Basu notes. In the first few months of project work, things were working at less than 50% efficiency. Usually AR is working with tabletop objects, Basu says, but the Cyclorama is a special case. The project team had to modify the existing tracking mechanism to enable that, so what developed was a new approach altogether. 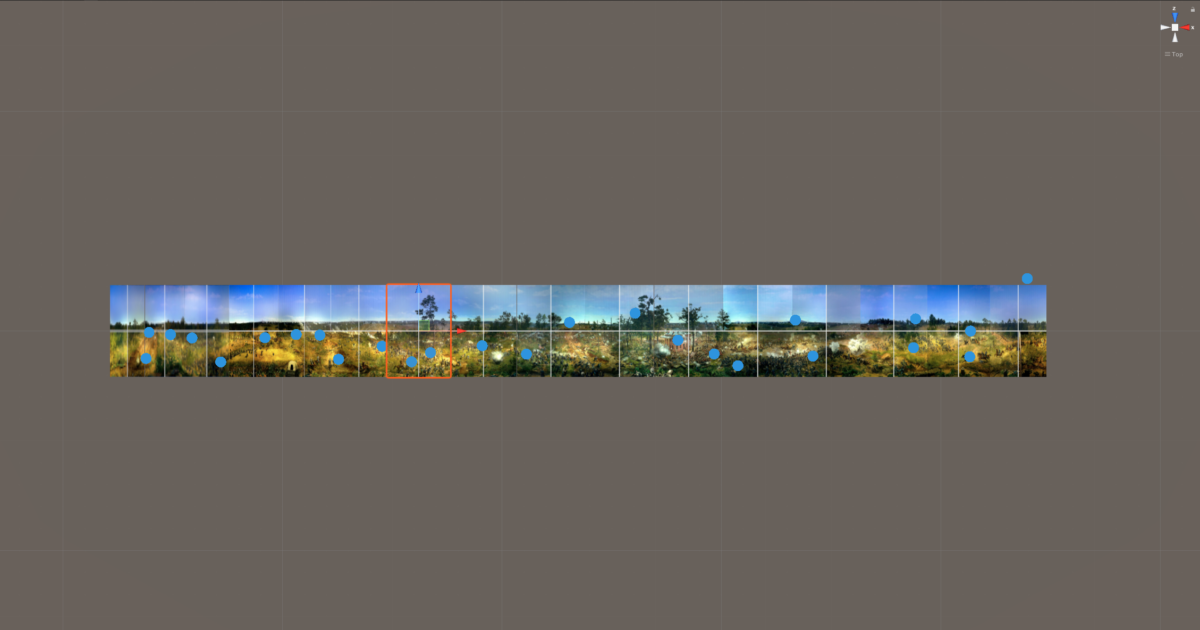 The image above shows how Basu and the project team segmented the entire painting for tracking, then established a geometric relationship between the POIs, marked by blue dots; the highlighted portion shows one segment. (Click the photo to expand.) The image below shows the critical part of the coding that went into establishing the geometrical relationship between the POIs; Basu had to modify the core XML (part of the AR tracking algorithm), as shown in the following screenshot (click to expand): 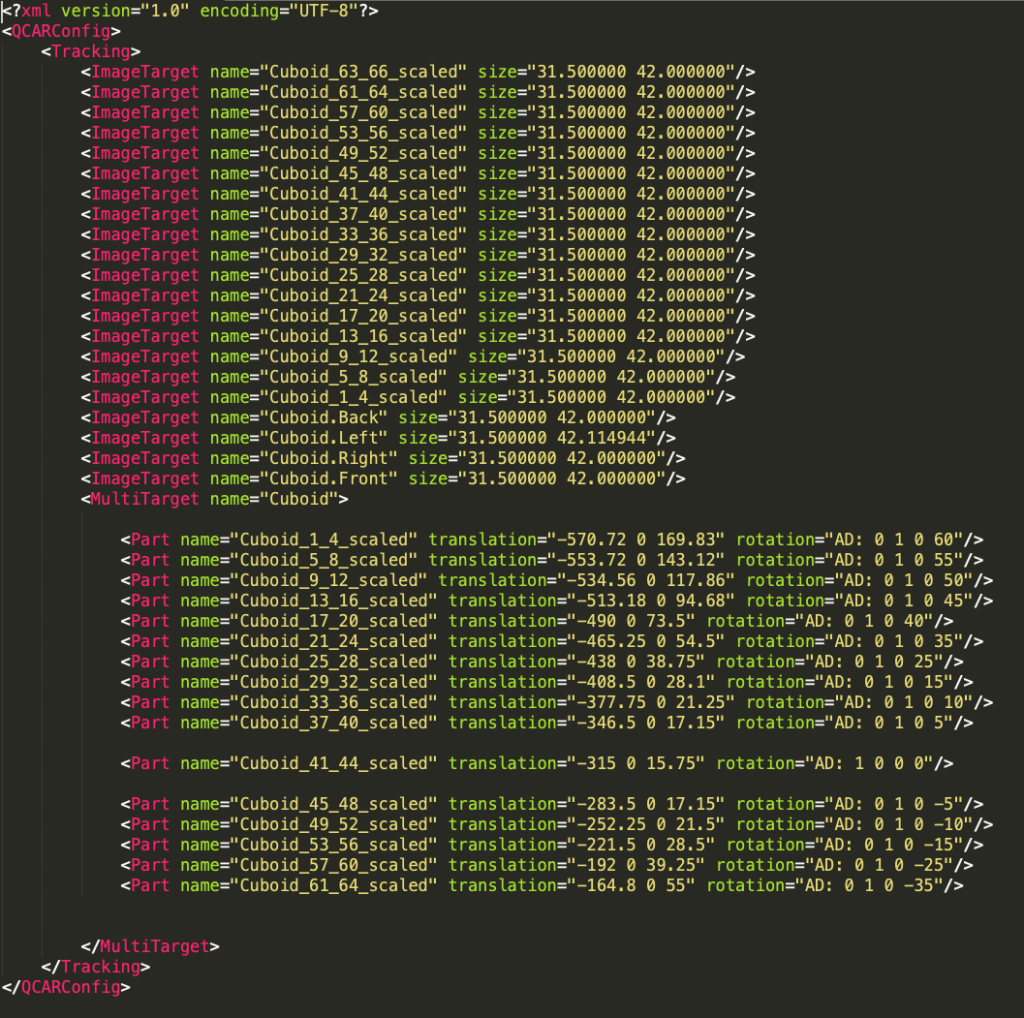 This Cyclorama AR app-building project work was unprecedented, so much so that when Arya Basu contacted Apple, he had to explain that the source object (the Cyclorama painting) could not in fact be printed out for review. Apple has for the most part only seen tabletop experiences before; the physical and technical aspects of the Battle of Atlanta Cyclorama AR experience thus made this AHC and ECDS-partnered initiative a unique project.

With the new strategy that the ECDS project team devised, the AR app does not require the user to know where they are standing. In the video Basu explains: “The application already knows which way and in what orientation these POIs are laid out,” so that the user can keep walking along through the exhibit “and the POIs are already tracked and in place for you to experience.” Jones adds: “One of the design intents that we had was that we wanted to have an unobstructed view of the painting for visitors, which is what they would have had in the 1880s.” A visitor who uses the app can “view information that you want while you’re on the platform without ruining the view for everybody else,” a problem that might have occurred with physical exhibition signs and labels on the floor or platform. The AR app therefore enables a freeform exploration of each POI that matched Jones’ description of the artists’ original intent.

This post and video have been featured on the Atlanta History Center’s Museum at Home webpage and on the Emory University LITS Online News website. Thank you!