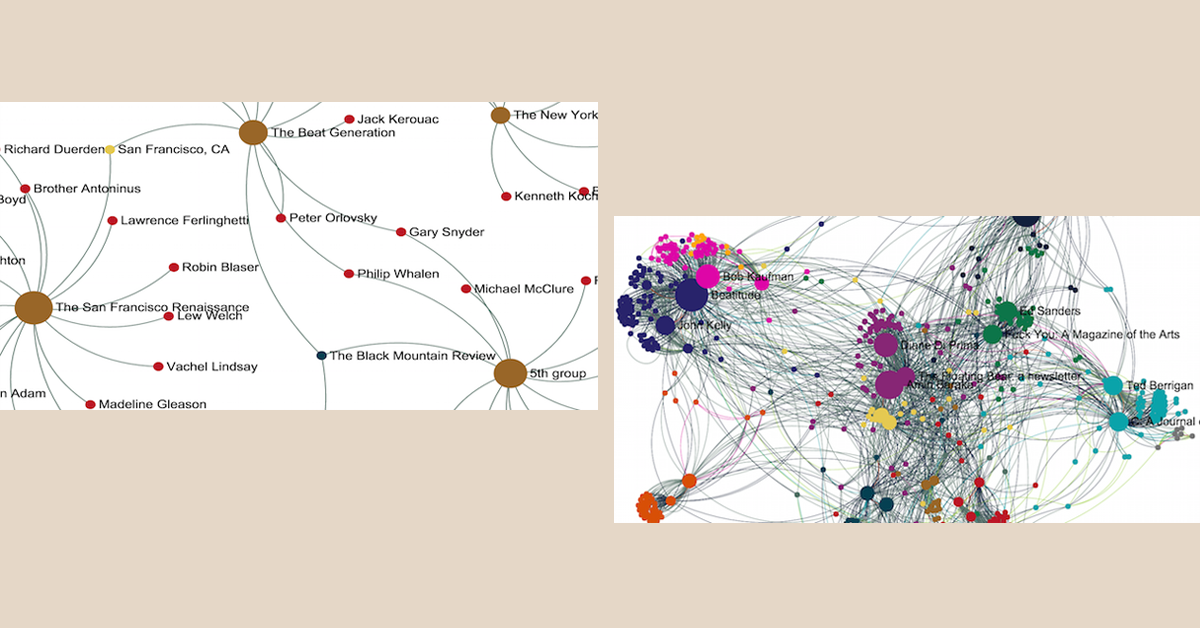 A new website, Networking the New American Poetry, features a kind of literary LinkedIn of 20th century writers associated with the Beat Generation by networking their connections as authors, editors, and translators.

The site brings together poets featured in Donald Allen’s influential anthology, The New American Poetry, 1945 – 1960, and the published materials of the Raymond Danowski Poetry Library housed at Emory University’s Stuart A. Rose Manuscript, Archives, and Rare Book Library. It’s designed to compare the anthology’s analysis with the archival evidence of a dozen rare poetry publications to yield new insights into the era.

While writers may be known for working in solitude to produce singular works, they influence each other through reading each other’s drafts, reviewing each other’s publications, and forming collaborations and friendships over matters of style and substance. And as Emory researchers pursued the question of whether the networks outlined in the anthology matched the archival evidence, they turned up a whole host of related questions.

“Critics have looked at the way Allen grouped poets into schools, and our hunch was that the era’s ‘little magazines’ tell a different story about communities emerging and active at that time,” says Bryan Chitwood, a digital scholarship consultant with the Emory Center for Digital Scholarship (ECDS) and English PhD candidate at Emory’s Laney Graduate School.

“We used visualization to start to tell that story — you can see where links exist. It’s also really cool to see how the journals themselves become actors, with relative levels of influence.” 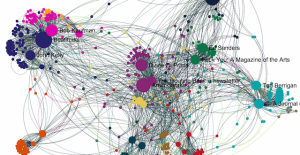 The website, a partnership between ECDS and the Rose Library, depicts writing and publishing communities by connecting more than 10,000 data points about more than 750 individuals in a user-friendly format. Site visitors can browse the connections among the journals and their contributors, both collectively and individually.

For example, from searching the “journal contributors” section for Jack Kerouac, the site lists 18 items tagged “author” from journals including Beatitude, Big Table, Evergreen Review, The Black Mountain Review, and Yūgen. Click on the “connections” button, and the network graph depicts links with more than a half-dozen people.

The dynamic network graphs depicting relationships between people and elements in the collection are generated by code developed by Rebecca Koeser, former senior software engineer with Emory’s Libraries and Information Technology Services (LITS) division who is now with Princeton’s Center for Digital Humanities.

The site also shares the site’s data, grouped into categories of people, journal issues, and journal items, in spreadsheet format.

While considerably detailed, the site does not attempt to categorize every reference to the Beats in the Danowski collection, whose former curator Kevin Young, now director of the Schomburg Center for Research in Black Culture in Harlem, also shared insights during the project.

“To a certain degree, the project opens the question of what ‘the Beats’ were, and who, and whether it’s a coherent category,” Chitwood explains. “Where there’s archival evidence that’s unexplored or unwieldy, this kind of study offers an incredible way to challenge established, historical forms of interpretation.”

The site not only invites new exploration of Beat literature, it also indicates the extensive research potential of the 75,000-volume Danowski Poetry Library, which has its own site also developed by ECDS and the Rose Library.

More than a dozen Beat poets included in the Networking the New American Poetry site are set to be featured as part of “The Dream Machine: The Beat Generation & the Counterculture, 1940 – 1975,” an upcoming exhibit featuring materials drawn from the Danowski and other Rose Library collections. The site and the show complement each other, says exhibit co-curator Aaron Goldsman.

“‘Networking the New American Poetry’ provides an amazing resource for those who want to keep exploring our collections after visiting ‘The Dream Machine’ exhibit,” the English PhD candidate says.

“One of the key aims of the show is to place Beat writers in a wider cultural and social context, and the data collected on these 12 different ‘little magazines’ does just that. The Beats were part of a large, diverse, and raucous counterculture extending from coast to coast, and this digital project is a powerful way to make sense of that broader scene as well as the Beats’ place within it.”

“The Dream Machine” is slated to open in Robert W. Woodruff Library’s Schatten Gallery on September 28, 2017.

Editor’s note: This story, originally posted on May 23, 2017, was updated on August 28, 2017, with the exhibit’s final name and its opening date, along with a link to a related library news release.