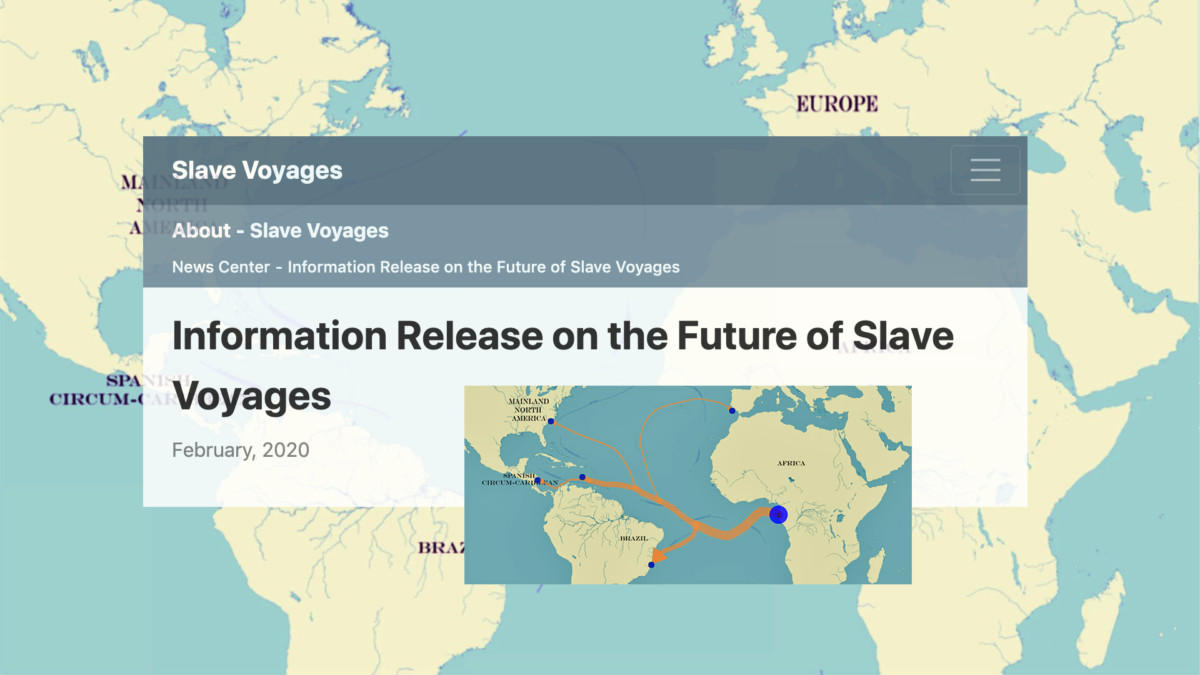 Earlier this week, Emory Center for Digital Scholarship (ECDS)-affiliated project Voyages: The Trans-Atlantic Slave Trade Database published an informational press release outlining future goals of the project and a proposed consortium. Below is an edited copy of the press release that was originally posted on the Slave Voyages website.

A few months ago, www.slavevoyages.org capped ten years of delivering basic information on the size and direction of the Atlantic slave trade by undergoing a complete recode and redesign and uploading a new database of intra-American slave voyages. As is well-known, the site and its data are freely available; while remaining free to users, maintenance is expensive. Since the project began in 1992 the organizers have raised $3 million in grants to cover development. However, this figure does not take into account the costs of hosting the site all of which Emory University has absorbed since 2008.

While the Slave Voyages website is widely used – an average of 1,700 users a day in the last four months of 2019 – it nevertheless faces the same sustainability problem that plagues all web projects built with soft money. How is it possible keep pace with changing operating systems, evolving best practices for user experiences, and at the same time meet the expectations of our diverse group of users? Project organizers believe the time has come to change the site’s organizational structure to facilitate answers to these questions. Later this year direct control of the site will shift from a single institution (currently Emory’s Center for Digital Scholarship) to a consortium comprising at least six sustaining institutions and underwritten via a Memo of Understanding. We are currently recruiting institutional members for this consortium to strengthen the site’s organizational base, widen the pool of expertise on which we draw, and ensure a diverse and inclusive administrative structure.

Consortium members would pay dues of a maximum of $10,000 per annum for a limited though renewable term of three or six years, thus allowing for changing institutional priorities. The consortium would form a steering committee comprising one member from each participating institution. The steering committee’s first responsibility would be to select one of their number to host the site for a term of six years, and the host would receive the total dues of $60,000 a year during that term to cover operating costs. The steering committee would have the responsibility of approving any additional developments to the project and have the final word on the direction of the site. In exercising its duties, it would appoint and liaise with an advisory committee representing the site’s diverse audience which we envisage meeting once or twice a year. The Steering Committee would coordinate with an operational committee which is to be responsible for the day to day running of the site. The operational committee would edit data contributions to the various databases, implement development proposals approved by the steering committee, and answer emails received by the voyages listserv among other non-technical tasks.

Slave Voyages expects to be able to provide an update on progress, especially consortium membership by April 30, 2020.

You can visit the Slave Voyages About page and History of the Project page on the official website, or read the featured Project Overview available on the ECDS website. Any questions and comments regarding the content, appearance, and functioning of the website as well as questions about this news release may be sent to: voyages [at] emory [dot] edu.