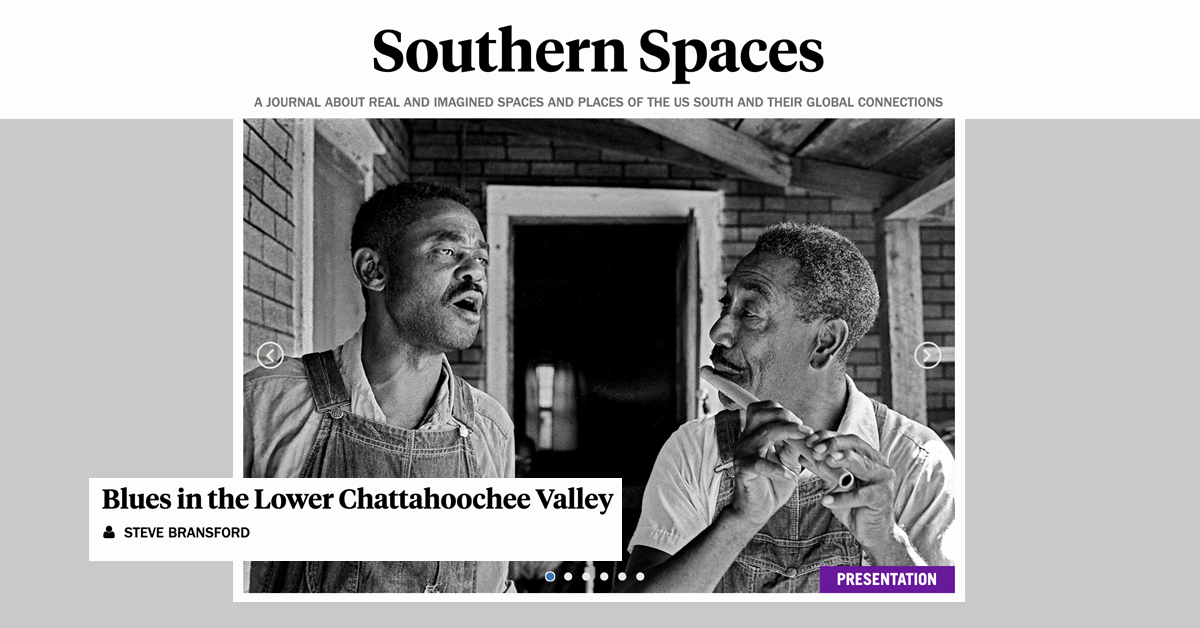 The multimedia, peer-reviewed open access journal Southern Spaces has recently revised and expanded a publication entitled “Blues in the Lower Chattahoochee Valley.” An earlier version of this multimedia presentation by Dr. Steve Bransford—senior video producer at the Emory Center for Digital Scholarship (ECDS)—was published in 2004, shortly after the creation of the journal, and has now been updated with new narrative material, as well as maps by Stephanie Bryan and new photographs from folklorist George Mitchell) thanks to assistance from Southern Spaces‘ graduate student staff. This blog post includes insights about the article’s history from Steve Bransford, as well as comments from Madison Elkins (Southern Spaces managing editor) and Dr. William Ferris (professor of history at University of North Carolina at Chapel Hill and former chair of the National Endowment for the Humanities).

Mitchell’s work on the Lower Chattahoochee Valley blues tradition complicates blues history and draws attention to the fact that regions largely overlooked by blues scholarship also had rich traditions of vernacular blues. These styles and traditions might have gone neglected if not for Mitchell, who captured the Lower Chattahoochee blues just as it had begun to wane. While these vernacular folk forms were influenced by commercial recordings, Bransford explains that what was unique was the particular blending of popular and vernacular forms, the latter of which included musical customs like buck dancing, pole plattin, and fife and drum music. The music represented regional and local cultures.

Background on the Project

When I asked Bransford what drew him to this project, he explained that George Mitchell was one of his personal heroes due to his legacy of fieldwork and great photography. As an Emory PhD student, Bransford’s dissertation was about documentary film and photography of American roots music. Bransford’s brother had a record label, Terminus Records, and they had obtained access to a huge cache of field recordings, representing hundreds of hours of recordings by Mitchell. These records had only been released on small music labels in the 70s and 80s, and many were subsequently out of print or otherwise unavailable to the public.

Bransford—with the help of Southern Spaces‘ editorial staff—obtained permissions from Fat Possum Records to include a handful of songs recorded by Mitchell, as well as interviews the field researcher had conducted in order to write liner notes. These interviews are exclusive to Southern Spaces, and gives listeners the unique opportunity to hear the blues artists’ speaking voices as well as George Mitchell’s interactions with these musicians. Among the musicians Mitchell recorded was Precious Bryant, who was a unique talent and strong creative woman among what was commonly thought of as a male-dominated form. Bransford explains that not many women were represented in acoustic blues, but Bryant was a breakout star of the region and beloved by prominent artists like Bonnie Raitt and Taj Mahal.

Bransford also conducted his own field work, including recordings and video of Precious Bryant. (See above video of Bryant performing “My Chauffeur,” recorded in Waverly Hall, Georgia, 2003; courtesy of Steve Bransford.) As a graduate student in Spring 2003, Bransford had worked on a web project as an independent study for Dr. Allen Tullos, senior editor of Southern Spaces. As the journal has emphasized multimedia publications from its inception, Bransford joined the staff from 2004-2007 and helped integrate media (audio, video, etc.); the original Lower Chattahoochee blues presentation, adapted from Bransford’s independent study, seemed a perfect fit for the journal.

Bransford emphasized to me the hard work of the Southern Spaces staff, who began work on updating the presentation in 2019 as part of the journal’s redesign and migration to WordPress. Updates include layout changes to improve navigability; audio, image, slideshow, and text link adjustments; and revised recommended resources, tags, and related publications. Staff efforts included checking citations, obtaining permissions, maps, three rigorous rounds of copyedits, layout, and review.

Managing editor Madison Elkins comments that the journal staff were especially excited to refresh the media elements of this piece. “We re-embedded the audio and video clips for a cleaner look and more intuitive user interface,” Elkins explains, adding: “Stephanie Bryan, our GIS-savvy review editor, designed two new maps, Steve created the embedded Spotify playlist, and we updated the photographs with new selections, with the help of both Steve and George Mitchell. Editorial associate Camille Goldmon tracked down images for as many Lower Chattahoochee Valley blues artists as she could and added new, higher resolution photographs from George Mitchell’s collection.”

Another feature of the update was bringing the piece up to current standards surrounding web accessibility. Robert Billups, Southern Spaces editorial associate and media accessibility specialist, worked to caption this fantastic video content, and is in the process of transcribing all audio content as well. (The captioned material is now searchable in Aviary, part of an ongoing ECDS project to improve accessibility and sustainability of web and multimedia projects.) With the culmination of update efforts in October from Southern Spaces staff, this dynamic piece now takes full advantage of advances in web design and media integration. Elkins adds that the article is also more screen-reader friendly, featuring image descriptions and improved header and sub-section hierarchy for screen reader navigation.

The presentation is sure to be a valuable resource for scholars and aficionados of music and folk history. Bill Ferris, professor of history at University of North Carolina at Chapel Hill and former chair of the National Endowment for the Humanities (NEH), had this to say about the publication of the article:

“Blues in the Lower Chattahoochee Valley” opens an exciting window on the rich blues tradition in the Lower Chattahoochee Valley. Thanks to the pioneering research and field recordings of George Mitchell featured on Southern Spaces, we now have a better understanding of Georgia and Alabama blues artists and their central role within the black community. […] Steve Bransford positions this music as part of the rich country blues tradition that was performed throughout the American South.

Southern Spaces is a fantastic outlet for scholarly work, and its capacity to include multimedia elements makes this journal well-suited for open access scholarship like the work mentioned above. To learn more about and celebrate open access scholarship at Emory University, please join us for International Open Access Week, October 19-25, 2020. Details are available in our previous blog post.