Our ancestors and other animals have not always been able to taste bitter foods. The bitterness sensation is thought to have evolved 200 million years ago. The prevalent hypothesis is that bitter taste evolved by random gene mutation events which caused the formation of the TAS2R gene family and the bitter taste receptors on the tongue that could bind to toxic chemicals. Animals possessing these mutations were able to  taste toxins in their food. These toxins would have tasted bad to the animal, and thus, the animal would learn to avoid the toxic food in the future. Animals with the mutations that produce the TAS2R gene family would be be better adapted to their environment because they can avoid toxic and poisonous foods that could cause sickness or death in the animal. Animals not possessing these mutations would still be susceptible to ingesting naturally occurring poisonous chemicals. Because these animals have improved survivability in comparison to other animals without the TAS2R genes, animals that could taste bitter foods would be better able to reproduce and pass the functional TAS2R genes to their offspring, who in turn would have increased survivability, be better able to reproduce and pas the TAS2R genes to their offspring. Organisms possessing the TAS2R genes have a higher fitness than organisms that do not posses this gene family. Thus, the TAS2R gene family would have been selected for via natural selection and became the ability to taste bitter foods would have become dominant in the population.

This is especially true in the case of the thyroid-inhibiting toxin, PTC. PTC is known to decrease thyroid hormone, which regulates metabolic function. PTC can also lead to liver damage and a host of other medical problems that would eventually lead to death. Being able to taste the PTC toxin would have allowed our ancestors to to avoid toxic foods that if ingested would ultimately lead to their death. Because of this, the ability to taste the PTC toxin would be passed on to the next generation and contribute to the increased fitness of the following generation. In this way, the bitter taste genes would become selected for and would become prevalent in the population.

How the Evolution of Bitter Taste Affects Me Today

Although variation in taste facilitated the evolution of primates and other animals, in modern human society it can be detrimental. With the advent of agriculture, there is less need for tasting of bitter food. Highly nutritious vegetables are known to activate the bitter taste receptors. Instead of doing their intended evolutionary job of protecting from toxic materials, the bitter taste receptors are preventing some people from getting an adequate daily amount of nutritious vegetables due to their aversive taste.

Additionally, some individuals have extremely high sensitivity to bitter tastes resulting from higher rates of expression of the TAS2R gene. These individuals are known as “supertasters”.  Supertasters can be found in the highest frequency in parts of Asia, Africa, and South America. This may be because these areas originally possessed a higher concentration of toxic plants and animals in comparison to other areas. In order to compensate for the increase in potential toxins, the individuals living in this area might have benefited more from bitter taste receptors. Today, many supertasters dislike a wide variety of vegetables such as cabbage and soy, and favor sweet items over bitter vegetables. This not only leads to increased chance of obesity and diabetes, but because of the avoidance of vegetables there is increased risk for GI diseases such as colon cancer. Not all side effects are bad though. Supertasters have a higher dislike for alcohol, carbonated beverages, and smoking. Avoidance of these items is actually quite beneficial in boosting heath.

Next time you don’t feel like eating your vegetables, you can blame it on evolution! 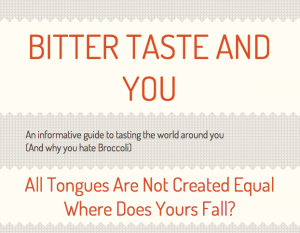 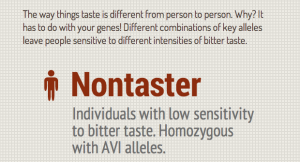 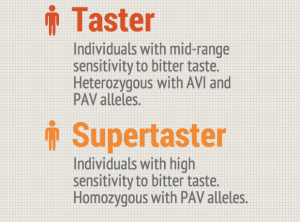 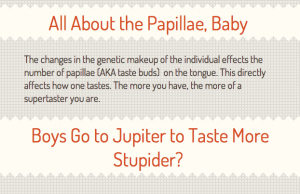