One of the challenges with studying climate change and evolution is that it can be hard to distinguish between plastic responses and genetic changes. Plasticity is a species’ ability to adapt to changing conditions without their genetics, or their DNA, being changed. If a species breeding time is earlier than before and there is a correlation with warmer temperatures, for example, it could be because most individuals have the ability to begin breeding earlier (a plastic response), or it could be because individuals that happen to breed earlier have higher survival and reproduction, and they pass this early breeding trait onto their offspring. The latter scenario represents evolution by natural selection. Much of the research done so far on the subject has measured a change in life history traits but has not determined if the cause is a genetic change or phenotypic  plasticity.

Species can respond to climate change in a few ways. They can change their life history traits, they can expand or shift their range, or they can go extinct. The latter has already happened to some amphibian populations, such as the golden toad and Monteverde harlequin frog in Costa Rica.

Some species that have been studied extensively on the subject are Drosophila flies, Darwin’s finches, and many other bird species. Some Drosophila have been found to exhibit genetic changes in the northern ranges that are very similar to ones from their southern ranges, suggesting that they either migrated northwards or there was directional selection for those genes.  Some other changes that have been observed in other species due to climate change are ranges moving northwards, egg laying and breeding periods happening earlier, and migration happening later. 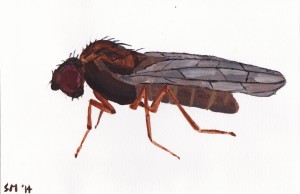 A few species of Drosophila have recently experienced genetic changes that have been attributed to climate change.

Even though some species have the ability to respond to climate change, such as adapting to the new conditions or moving, not all species can do so.  Amphibians, for example, are hit very hard by it, with high rates of extinction compared to other vertebrates.  Coral reefs are also hit hard by climate change because higher CO2 levels and bleaching (losing their microbial partners) is a problem.  Another problem that is posed by climate change is that if two species have coevolved and are symbiotic with each other, one species could experience evolution due to climate change and the other may not.  For example, a pollinating insect could emerge too early before the plant species it usually pollinates has bloomed. 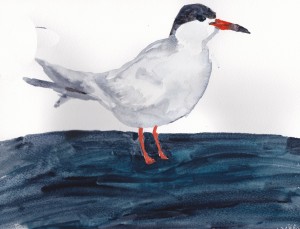 Artic terns are one species of birds whose breeding date has advanced, possibly because of climate change. This is an example of a phenotypic change. 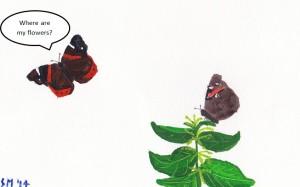 Insects can be affected by asynchrony, for example when a butterfly hatches earlier then its host plant.

Climate change presents a new, challenging influence on habitats, and its long term effects on species diversity and their evolution have yet to be determined, but in the short term it is clear that climate change does have an effect on the evolution of species.

MØller, A. P., Flensted-Jensen, E. and Mardal, W. (2006), Rapidly advancing laying date in a seabird and the changing advantage of early reproduction. Journal of Animal Ecology, 75: 657–665.