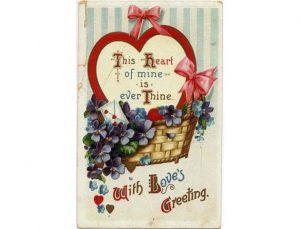 February 14, 1913: Hall Bros. of Kansas City, MO (later known as Hallmark) offers its first valentine postcards. Two years later, a fire would destroy all of their inventory, forcing them to buy printing equipment to start mass producing their own valentine cards in 1916.

No one knows the exact origins of the holiday, but it’s predecessors include the Roman holiday of Lupercalia, a Catholic celebration of two martyrs named Valentine, and the ancient Norman Galatin’s Day. By the Middle Ages, giving handmade cards to romantic interests was already a trend. According to the National Retail Federation, in 2016, Americans spent $19.7 billion for Valentine’s Day.

A Token of my Affection: Greeting Cards and American Business Culture