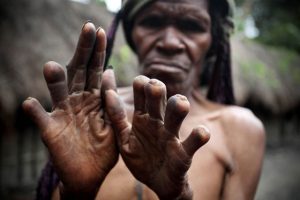 The death of a loved one can be a traumatic experience and causes emotional pain and suffering. However, in some cultures the loss can result in physical pain as well. Certain cultures believe this physical representation of emotional pain is essential to the grieving process. This can be seen in the Dani tribe in Papua, New Guinea. Some tribe members have cut off the top of their finger upon attending a funeral. This ritual is specific to the woman population of the Dani tribe. A woman will cut off the top of her finger if she loses a family member or child. The practice was done to both gratify and drive away the spirits, while also providing a way to use physical pain as an expression of sorrow and suffering. The Dani tribe members have the religious belief that if the deceased were a powerful person while living, their essence would remain in the village in lingering spiritual turmoil.

The practice is performed by first tying a string tightly around the upper half of the finger for about 30 minutes. This allows the finger to become numb for a “near” painless removal. The finger is removed by using an ax and the open sore is cauterized both to prevent bleeding and to form new-calloused fingers. The left over piece of finger is dried and then either burned to ashes or stored in a special place. This ritual is now banned in New Guinea, but the practice can still be seen in some of the older women of the community who have mutilated fingertips. The practice of causing physical pain to show grief and deal with mourning can be seen in a numerous amount of other cultures as well. Cutting arms, legs and body, shaving off hair from the head, and burning skin are rituals used by other cultures during the grieving process. Grieving is a natural response to losing someone and everyone has different ways of dealing with grief.