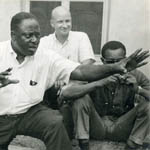 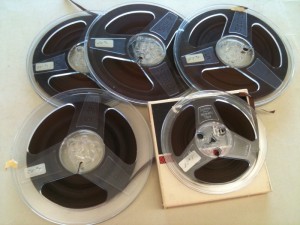 The SCLC collection has proven to be very rich in audio visual material revealing not only the diverse programs and events in which the organization participated, but also the early development of political and philosophical thought of some of its most recognizable figures.  Among the cassette tapes, vinyl records, reel to reels, VHS and DVDs, one can find recordings of panel discussions and speeches at National Conventions, demonstrations like the March from Selma to Montgomery, Alabama, involvement in national and international policy issues like health care, and public speaking engagements and programming.  In a series of three blog posts, I would like to note gems which I have come across while processing the collection’s audio visual material and illustrate the potential for new research and study which such sources offer. 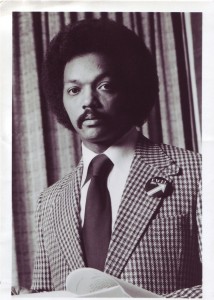 In this first “dispatch,” I will briefly explore the early political and philosophical thought of Jesse L. Jackson revealed in a speech and subsequent question and answer session about Operation Breadbasket.  Jackson was selected by Martin Luther King, Jr. and James Bevel to be the national director of Operation Breadbasket in 1967.  Due to conflicts with Ralph Abernathy, King’s successor as President of SCLC, Jackson resigned and formed Operation PUSH in 1971.  In 1996 the organization merged with the Rainbow Coalition to form the Rainbow/PUSH Coalition.

The primary focus of Jackson’s address, made during his tenure as National Director of Operation Breadbasket, is the viability of organizing a corporation on the South Side of Chicago, Illinois as a means of gaining and maintaining power in the struggle for civil rights.  In Jackson’s opinion, economic leverage, particularly through the use of consumer power, provides one of the most viable options for African Americans and poor Americans struggling to gain equality at a moment when formal political demonstrations seem less effective.  However, during the question and answer portion of this engagement, an audience member raises the question of Jackson standing at the intersection of the nonviolent civil rights strategies of SCLC and more overt and aggressive tactics of emerging Black Nationalism.  It is Jackson’s response to this query that reveals much about this critical moment is his political and philosophical thought. 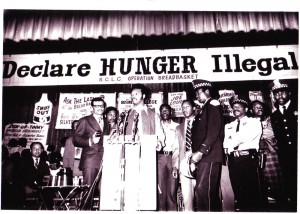 Jackson at an unidentified Operation Breadbasket event, May 9, 1970. Photo by Chris Holmes. 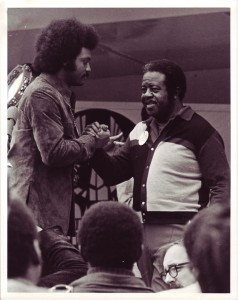 First, Jackson states that he was asked a similar question by Martin Luther King, Jr. to which Jackson responded that he was indeed moving toward Black Nationalist sentiments. He goes further to suggest that the backlash against Black Nationalism by organizations such as SCLC emerges from a misunderstanding of the philosophical groundings of the nationalist ethos, such that Black Nationalists are misunderstood as perpetuating an inversion of the same racism and bigotry as white supremacists. Jackson provides a rebuttal by saying, “Black Nationalism is a negation of white supremacy, not a negation of white people.” He then goes on to explain the ways in which the ideology of Black Nationalism does not require the erasure of white people from the geographical and political landscape in ways that white supremacy, through segregation and physical and other assaults, demands the erasure, or at least silence and invisibility, of black people. It is a striking and formative moment in Jackson’s development as a leader that certainly begs further exploration in understanding the complexities of the rise of Black Nationalism as an alternative to the nonviolent strategies of SCLC and similar organizations.

Note: Though the SCLC records currently are closed for processing, much of the audio visual material will be digitized and available in MARBL’s reading room beginning in 2012. Michael Hall is a Ph.D. student in Emory’s Institute of Liberal Arts.