The Southern Confederacy was a newspaper published in Atlanta during the Civil War from 1861-1865. It was strongly Southern Democrat and functioned during the War as one of the main newspaper outlets in Atlanta, with the other being theDaily Intelligencer.

The original version of the Southern Confederacy was first published in 1859 by James P. Hambleton. Franklin Garrett mentions the highly talked about newspaper in Atlanta and Its Environs by stating that Hambleton “was a fire-eater, and his editorials were highly intemperate in tone.” (Garrett, p.454) Hambleton was a strong voice in a city which was growing rapidly, in a country which was heading towards war. In May, 1861, Hambleton joined the Confederate Army and the title for the paper was transferred to C.R. Hanleiter and George W. Adair who at the time were publishers of the Gate City Guardian. The papers merged and retained the name Southern Confederacy. You can find Hanleiter’s diary from 1861-1865 on microfilm in MARBL.

MARBL has a bound volume of the Southern Confederacy from August 13, 1861-February 11, 1862. Though this doesn’t cover the bulk of the war and the Battle of Atlanta, it is a fascinating look at how Atlanta reported on the war when it wasn’t right on the city’s doorstep.

The cost for the paper was $5.00 a year for a daily subscription or $2.00 a year to get the paper weekly. It was made up largely of advertisements and classifieds including this one for W.F. Herring and Co. selling military goods for cash only.  Railroad schedules and ticket prices were listed on the front page as well as a Fraternal Record which included local lodges and meeting information. 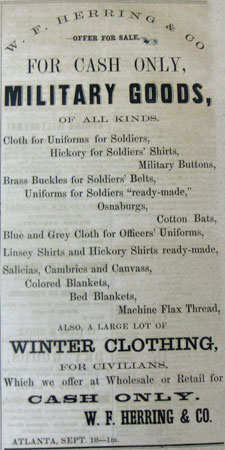 Advertisement in the Southern Confederacy, 1861

The articles written brought news of the war and also of the newly-formed Confederate government including the unopposed Jefferson Davis electoral ticket for President. Other news included articles about a new postage act enacted by the Confederate Congress, as well as opinion pieces about how Atlanta and Georgia should be involving themselves in the war effort.

Though the Southern Confederacy did not survive the war, it is a solid record of Atlanta during a period of tremendous unrest and upheaval. It is a study in not only how the war was being relayed to the people of Atlanta, but also of the daily functions of a young, Southern city in the early 1860s.