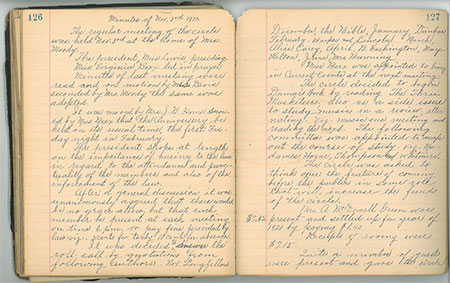 I have always been fascinated by African American women who organized themselves into literary, social, and service organizations during the early to mid-twentieth century. Many of these clubs were founded within 50 years of emancipation and mark a thirst by African American women to not only become literate, but to be well-read and to keep abreast of contemporary issues.

MARBL has two small, but significant collections, the Frances E.W. Harper Literary and Social Circle Papers and the Utopian Literary Club Papers, which illuminate activities of African American women not just as readers, but also as philanthropists and agents of social change.

The Frances E.W. Harper Literary and Social Circle of Savannah, Georgia was a club organized by African American women in 1899. While the literary society was dedicated to reading works of literature, it also included a social, religious, and service aspect. Members were expected to be well-versed in literature as the November 3, 1922 meeting minutes instructed members to:

Aside from their literary pursuits, the women of “The Circle” donated books to Savannah's library for African American residents, supported the construction of a female dormitory at the Georgia State Industrial College (now Savannah State University) and donated to a fund for Charity Hospital, which was the city's first hospital to train black nurses and doctors. The collection at MARBL contains a book of meeting minutes from 1915 until 1929. 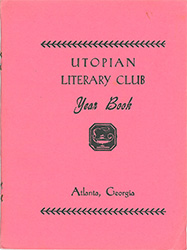 Yearbook of the Utopian Literary Club

The Utopian Literary Club of Atlanta, Georgia was founded in 1916 by “a few friends, having similar interests in literature, art, sculpture, painting, and current developments…[who] met together to organize a club that would infuse them with objectives and set goals, by provoking discussion and thereby stimulate thinking.” Each year a theme was chosen and the monthly meetings were centered on a topic related to the year's theme. Over the years the women read numerous books and discussed an array of topics ranging from classic literature to issues facing women in foreign nations. Some of the themes and topics included: “American novelists,” “The Negro Woman in History- Race and Women's Clubs,” “Slavery” and “World Cultures.” 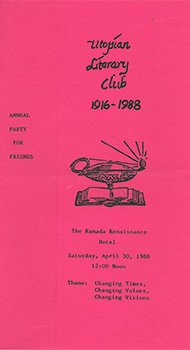 Program for the AnnualParty for Friends, Utopian Literary Club, 1988

In addition to their literary activities, the women hosted an annual Party for Friends social event and fundraiser open to non-members to learn more about club. Each year at Christmastime, members hosted a Christmas Party and donated to a local charity benefitting women and children. The collection in MARBL contain the club's constitution, bylaws, meeting minutes, events programs, yearbook, and member profiles and photographs from 1984-2003. Through their collection of papers, the Utopian Literary Club and Frances E.W. Harper Literary and Social Circle provide an intriguing glimpse of African American women concerned with stimulating their minds amid the race's long struggle for equality. I invite you to conduct your own search for sisterhood within MARBL's holdings.