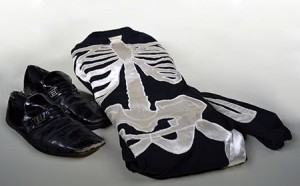 Emory’s unofficial mascot is Dooley, a skeleton who first made his appearance in an 1899 issue of the Phoenix, a monthly literary journal. In this publication, Dooley explained that he was the skeleton in the science room and that he did not care for the students at Emory. Since then, he has appeared in numerous publications and became known as the “Lord of Misrule” until eventually he was given his own Ball and week of fun in the spring. During Dooley’s week, which this year runs from April 1-6, you’ll find Dooley and his bodyguards around campus letting class out early or overseeing various social functions. One of the suits previously used by Dooley can be found in MARBL along with an old pair of shoes and a hat. The identity of the student who dons the costume and portrays Dooley each year is one of Emory’s best-kept secrets.