The Manuscript, Archives and Rare Book Library is a place of discovery. All are welcome to visit and explore our unique holdings, whether as a researcher or an observer. The breadth and depth of our collections are vast, and it is nearly impossible to investigate every nook and cranny. We invite you this year, through our blog, to tour some of those places you didn’t know existed, and get acquainted with collections you might not have previously explored. Check back in with us weekly over the course of 2013 as we offer you a delightful look into some of the favorite, but perhaps lesser-known, coPreview Changesrners of our collections. These pieces are visually interesting, come attached with fascinating stories, and are often 3D objects you might not have realized are part of what makes up The Extraordinary World of MARBL. 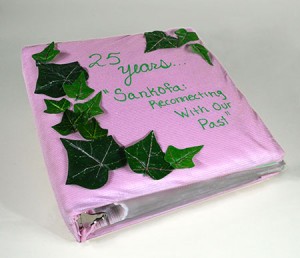 The Nu Alpha Chapter of Alpha Kappa Alpha Sorority, Incorporated was chartered at Emory University on April 14, 1979. Alpha Kappa Alpha Sorority, Incorporated was founded on January 15, 1908 at Howard University as the first Greek-letter organization established by African American college women. This scrapbook, which is held in MARBL, was compiled in 2004 to commemorate the chapter’s 25th anniversary. In addition, the chapter hosted a weeklong celebration around the theme “Sankofa: Reconnecting with the Past.” Some of the events included a step show, pot luck dinner, career networking tea, and banquet for chapter alumni. Today, the Nu Alpha chapter is still active at Emory University.