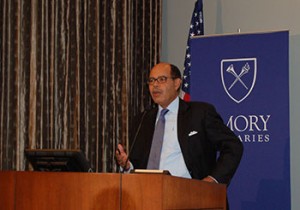 Joe Louis Barrow Jr. shared remembrances of his father, legendary boxer Joe Louis, and the effect he had on competitors as well as people around the world.

The Robert W. Woodruff Library held an opening event on Nov. 13 for the exhibit “Joe Louis Barrow: A Life and Career in Context,” presented by the Race and Sports in American Culture Series (RASACS). The panel consisted of three people: Pellom McDaniels III, faculty curator of African American Collections at the Manuscript, Archives, and Rare Book Library (MARBL); Dana White, MARBL senior faculty curator and professor emeritus of American Studies, and Joe Louis Barrow Jr., son of the famous boxer himself. Over the course of the night, each panelist gave a ten minute talk about the exhibit and Joe Louis (1914-1981), and then opened the panel up for questions from the audience.

The room was nearly filled, the seats taken by attentive listeners. It was a mix of cultures, diversities, and ages. I saw students, teachers, library employees, and community members – many of whom had not previously attended an event at the Woodruff Library. Everyone seemed interested in learning about the unexamined life of Joe Louis, the son of sharecroppers and grandson of slaves. In fact, when the panel opened to questions, there was a steady stream of questions, and several people stood up simply to express their appreciation for the exhibit and for having the opportunity to hear from Joe Louis Barrow Jr. One community member, George Hirthler, told me after the event that he found it inspirational and very much enjoyed hearing the in-depth history of Joe Louis’s childhood.

Indeed, the RASACS panel presented a much more layered view of the famous Joe Louis than most people would expect. Through their stories, the three panelists explained how Louis was not just a boxer, but an American symbol during World War II for the entire world. Joe Louis Barrow Jr. told a touching story about when he was on a book tour for his biography of Joe Louis.

During a radio talk show, he received a call from someone who said he was Jewish and Polish, and had suffered in the concentration camps with his family during the war. The caller said that he had heard about Louis’ fights, and he knew that the Germans would not win the war because Joe Louis had defeated Max Schmeling (1938). 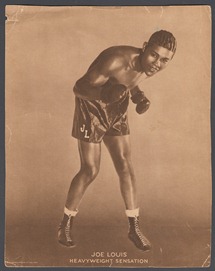 Stories told of Louis’s humility and respect for past opponents provided even further reason for people to hold him up as a symbol for America. Not only did the boxing community come to admire him, but he also maintained surprisingly meaningful relationships with his competitors from important fights. I personally found it especially interesting to learn that Louis had helped pay for Billy Conn’s house, because they had such a strong friendship after their match in 1941.

The opening of this exhibit gave the Atlanta community a fascinating look into a man, of whom many of our current generation may not be aware. Emory freshman Brad Fitch, who attended the event, explained that he did not think his generation knew anything at all about Joe Louis, or how much of an important American symbol he was during that time. When I asked him if he had any interest in seeing more of the exhibit, he said yes at once. I admit that I agree with him. I look forward to seeing the full exhibit, now located on level 2 of Woodruff Library. The exhibit will travel in the spring to areas including Chambers County, Alabama, where the boxer was born; Detroit, where he spent his formative years and learned to box; and Chicago and New York City, the locations of his famous fights.