Called variously the Emory News Bureau, News Services, Information Services, and the News Center, one office has long handled press and publicity at Emory, and its records are now open for research in the Emory University Archives. They include mostly subject files on Emory-related topics and people. The collection is a fantastic new entrée into Emory University history from the 1930s to the 1980s. Here’s a peek at what can be found in the files: 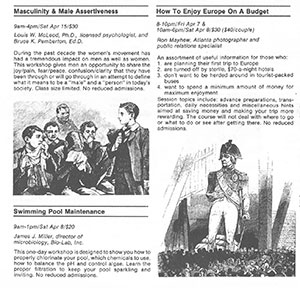 Contains descriptions of and schedules for community education classes at Emory, including one course offered in the spring of 1978 called Masculinity and Male Assertiveness that gave men an opportunity to explore the impact of the women’s liberation movement on men. Other course titles from that spring include How to Enjoy Europe on a Budget, Women in Small Business, and The Deeper Meaning of Dreams. 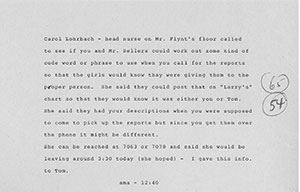 Contains a large number of press releases from the time Mr. Flynt was at Emory Hospital after he was shot in Lawrenceville, Georgia in 1978. This memo demonstrates one strategy the University had for managing information on high-profile patients at the Emory Hospital. This file is of recent interest; Mr. Flynt’s shooter, Joseph Paul Franklin, was executed in Missouri on November 20, 2013.

Undated and simply labeled “computer,” this image appears to show several students being introduced to an early computer. Many other posed and candid photographs of students are found throughout the collection. 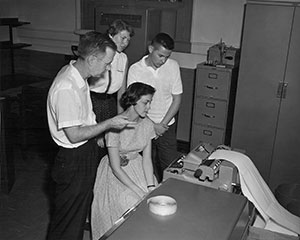 Students being introduced to an early computer