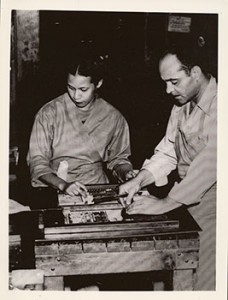 Almena Lomax–born Almena Davis in 1915–is best known as a journalist, newspaper publisher, and civil rights activist. She began her career in 1938 as a journalist at the California Eagle, an African American newspaper in Los Angeles under the editorship of Charlotta Bass. A few years later in 1941 Lomax founded her own weekly newspaper, the Los Angeles Tribune. With the help of her business partner Lucius W. Lomax, Jr. (who she married in 1949), Almena Lomax published the Los Angeles Tribune for almost twenty years, serving as editor and chief writer. Throughout the 1960s Lomax worked as a freelance journalist, publishing articles in several major publications, including The Nation. She briefly published another newspaper, also called The Tribune, in 1964 and 1965, first out of Tuskegee, Alabama, and then out of Los Angeles. During the 1970s Lomax sought employment with mainstream newspapers, working for a time for the San Francisco Chronicle and the San Francisco Examiner.

The Almena Lomax papers at MARBL, in addition to documenting her career as a journalist, also reveal that she was an aspiring novelist. Her body of work includes three book-length works. Lomax’s first novel, The Ten Most Wanted White Men, explores violence and retribution as a response to oppression. The novel’s central character, Josiah Herron, is an African American man who has spent his life living in fear of terrorism against blacks. While watching the Civil Rights Movement unfold on television, Herron decides to take matters into his own hands and kill ten noteworthy white men who he views as symbols of racism and oppression. Lomax wrote the novel in the early to mid-1960s, during a period in which she herself frequently traveled to the South to report on and participate in the Civil Rights Movement.

Lomax struggled to find a publisher for the novel. After receiving rejection letters for several years, Lomax concluded that white publishers and audiences were not receptive to the racial themes of her work or to the character of Josiah Herron. In 1968 she observed in a letter to a publisher that, “Josiah is not in the slightest sense the stereotyped Negro killer. He is not explainable, as William Styron’s Nat Turner is, in terms of being obsessed with white women. He is explainable in terms of reality, however, in terms of the Black Panthers of Oakland…Josiah is explainable in terms of Rap Brown and Stokely Carmichael and the whole so called ‘militant movement’ which would not have been believed, even by most Negroes, two years ago.” It is particularly noteworthy that Lomax wrote most of the novel, which explores themes relating to Black Power, before the Black Power movement received widespread coverage by the media in the late 1960s. While portions of The Ten Most Wanted White Men were published in Lomax’s own newspaper, The Tribune, the novel was never published in its entirety.

Lomax went on to write another unpublished novel, Masters and Sons, which was inspired by the history of Lucius W. Lomax, Jr.’s family. The novel is set in Texas in the years following the Civil War. It centers on the character of Luther Lamar, an African American who has taken the name of his white father and former owner. The novel explores race relations and the meaning of emancipation through the interactions of the black and white Lamars in a small Texas community.

The Almena Lomax papers, which contain numerous drafts of The Ten Most Wanted White Men and Masters and Sons, are processed and open to researchers. Please check back for more information about Lomax’s novelized account of her life. Reference: Quotation from a letter from Almena Lomax to Dorothy de Santillana, May 22, 1968, Almena Lomax papers, Manuscript, Archives, and Rare Book Library, Emory University.