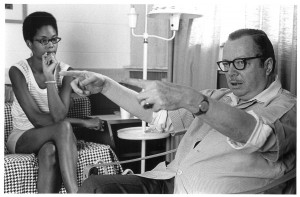 Playwrights Carlton and Barbara Molette compiled newspaper articles on performances of “Sizwe Bansi is Dead,” a play penned by the noted white South African dramatist Athol Fugard. The title character in this particular play lives in apartheid-era South Africa, where he is prohibited from traveling or holding a job without appropriate marks (which he lacks) in his official passbook. However, in the course of the play, Bansi stumbles upon a corpse and finds that the dead man’s passbook, complete with work permissions, is still on his body. Bansi is faced with a dilemma: ignore the once-in-a-lifetime opportunity and continue to live on the margins of social acceptability, or assume the dead man’s identity and give up the name by which his wife and children know him. After much internal strife, Bansi decides to steal the dead man’s passbook, burn his own, assume the name of Robert Zwelinzima, and remarry his wife under this new identity. The play thus examines in painstaking detail the elaborate challenges faced by South Africans simply to live and work in the land of their native ancestry: Bansi, for example, must become a “ghost” merely to gain basic rights that others take for granted.

The most notable of the Molettes’ compiled articles on this play comes from the New York Times edition for October 14, 1976. It reported that two award-winning actors had been detained for putting on an “inflammatory” performance of the play in Umtata, the capital of the Transkei territory in southeastern South Africa. The actors’ only crime seemed to be their participation in an artistic work critical of the dominant regime. The Minister of Justice in this territory declared ominously and vaguely that the two would be released only upon “satisfactorily” answering questions related to their involvement in the performance. A street protest by members of the New York theater community occurred outside South Africa’s consulate near 56th Street on the same day that the Times published its report, and demonstrators urged President Gerald Ford to intervene in the issue.

One can image the disappointment and outrage the Molettes must have felt while reading about these particular events. The Molettes, a husband-and-wife team of playwrights, have spent their own careers creating plays commenting on the experiences of African Americans in the United States. Rosalee Pritchett, one of their earliest plays, concerns a group of well-to-do African American women who are content with their place in life. While playing bridge, they hear rumors of imminent racial violence in the area and are relieved when the National Guard is called in. Their serenity is soon shattered, however, when one of the women is sexually assaulted by a member of the Guard. While at times a bit heavy-handed, the play, written in the early 1970s as the civil rights movement was beginning to lose momentum, served as an exhortation for African Americans not to remain satisfied with gains already achieved, but to continue to challenge oppressive structures of power. Nearly forty years later, Prudence told the tale of the historical Prudence Crandall, whose Connecticut academy was closed in 1832 when she dared to admit African American girls and give them an education. Looking to both the past and the future, the Molettes have sought to illuminate the African American experience through drama. 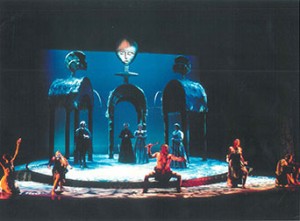 Scene from “Fortunes of the Moor” Ohio State University, 1998.

The Molettes’ papers contain drafts of their numerous plays, along with lectures and essays written by Carlton on the depictions of African Americans in American popular culture. But the holdings in this collection also reveal a wider commitment to making the stories of African Americans into an essential component of the broader story that the nation tells itself. Carlton’s personal files, for example, contain information on the efforts of African American scholars in the early 1970s (Carlton among them) to turn the emerging field of “African American Studies” into a standard and indispensable university department. Other records showcase the expertise that Carlton brought to the activities of the influential National Endowment for the Arts. The Molettes’ papers are therefore a vital resource for those seeking to understand the nexus of art, education, and politics.

Correction: The captions of this post were updated. One caption misidentified Carlton Molette in one of the images. Another caption misspelled the name of the play.  Both captions have been updated on 7/28/2020.