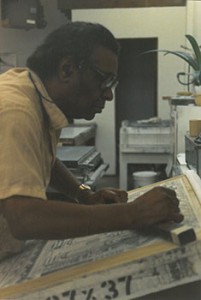 In the late 1990s, as the long career of painter, sculptor, and university professor John Biggers was drawing to a close, the artist received letters from admirers commenting on his life’s work. A native of Gastonia, North Carolina, Biggers spent most of his career in Houston, Texas. There, he founded the Art Department at Texas Southern University (a historically-black university) and served as its first head. Several of the letters reflected on how Biggers, an African American artist, had integrated the stories and themes of multiple racial and ethnic groups into his extensive body of work. In 1997, Mar Lynn Harris, a board member of the Cherokee Elders Council of Houston, invited Biggers to contribute to a planned library and museum for descendants of Native American tribes in East Texas. At a recent talk by Biggers, Lynn explained, the artist had eloquently illuminated the links between Native American tribes and peoples of African descent in a way that left “eyes…misting.” The same year, Milly Heyd, working on a book entitled Mutual Reflections: Jews and Blacks in American Art, wrote Biggers to ask for permission to publish images of three of his paintings in her book. Biggers’s inclusion in the book was especially important to Heyd, as Biggers’s primary mentor decades before, during his graduate training at the Pennsylvania State University, was Viktor Lowenfeld, a Jew of Austrian origin who had fled his native country in the late 1930s. 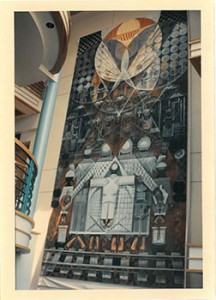 That Biggers’s work embodied a number of different influences did not mean that his style remained static. Biggers’s early career produced work that hewed closely to European styles of realism. (and Biggers’s service in the United States Navy during World War II inspired a few paintings that were striking in their depiction of wartime chaos.) Yet as the artist’s career progressed – and especially after a 1957 trip to West Africa – Biggers began incorporating a number of more abstract themes into his paintings, ranging from maternal iconography drawn from African sculpture to the quilts and triangular-roofed “shotgun houses” of his North Carolina youth. Biggers’s work reached its most mature form with four murals painted in the early 1990s: two in Winston-Salem, North Carolina, and two in Hampton, Virginia. Each of these works blended Biggers’s favored styles. In one of the Winston-Salem murals, Origins, lions, an elephant, and a ram stand in front of a quilt-patterned background, and the image of a flower in bloom tops the mural. In Ascension, a row of angels stands underneath images of shotgun houses, with a child representing hope rising above railroad tracks. These paintings depicted African Americans as a people defined both by American rootedness and diasporic consciousness. One of the Hampton murals, House of the Turtle, includes large figures of a Native American and an African American, representing Hampton University’s origin as a school for Native Americans and freed former slaves. 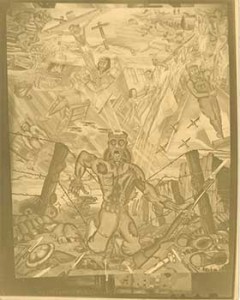 The significance and prestige of Biggers’s career is symbolized by one of his final projects, creating illustrations to accompany Maya Angelou’s poem Our Grandmothers. According to Angelou, Biggers’s art, in attempting to address the complex identities of African Americans, ultimately “leads us…into the discovery of ourselves at our most intimate level.” The John Biggers papers contain writings, correspondence, files of professional activity and awards, and printed material recording the artist’s lengthy career. An extensive collection of photographs depicts not only Biggers’s finished paintings and drawings, but also documents his painting process as well as the African sculptural styles that inspired much of his imagery. The John Biggers papers will serve as a valuable resource for scholars interested in the relationship between artistic representation and African American identity. They join collections of Biggers’s contemporaries also held at MARBL, including those of Samella Lewis and Mildred Thompson.