Soble (b.1973) earned her BFA in photography from Georgia State University in 1998. She has exhibited her work in solo and group shows throughout Atlanta, including shows at Nexus (now the Atlanta Contemporary Art Center), The Telephone Factory Lofts, Ponce City Market Pop Up Gallery, and an array of Atlanta eateries and coffee shops. In 2011 and 2012, Georgia Voice voted Soble “Atlanta’s Best Artist.” Soble’s personal photography collection includes albums dating from 1992 to 2000. The albums feature art shows and gallery exhibition openings, Atlanta Pride parades, and numerous social events. For more than twenty years, this Atlanta native has documented her life through photography.

In a recent interview, Soble relayed that she began keeping a diary at age nine and that, in many ways, these photography albums were an extension of her childhood chronicling of everyday life. Soble says that her passion for photography grew out of “an obsessive desire to capture moments with friends and family.” For Soble, documenting her life and the lives of her friends has been a way to connect with those around her and a vehicle for finding her place within that community.

Soble’s development as an artist coincides with her coming out as a lesbian. Her undergraduate years at Georgia State in downtown Atlanta were particularly influential both on her growth as a photographer/painter and her immersion into the Atlanta lesbian and gay scene. While she was exploring painting under the tutelage of famed artist-teachers like Larry Walker (father of Kara Walker), Soble and her friends frequented Atlanta gay clubs like Loretta’s, Weekends, Backstreet, and Armory, many of which are no longer in existence. Friends and acquaintances came to expect that if Alli was coming to a party or event, she would have her camera in tow.

After a night of taking photographs, Soble hosted photo parties, where friends would gather to look through pictures from the previous night’s outing. With notable enthusiasm, Soble describes the anticipation of waiting twenty-four hours for her film to be developed, a feeling, she says, that we’ve lost in the digital era. Soble also remembers her enjoyment in displaying the photographs she had taken the night before, gingerly placing them on the sticky album pages and journalistically recording events, names, and dates in the margins–a task made easier thanks to Soble’s “unique memory for details.” 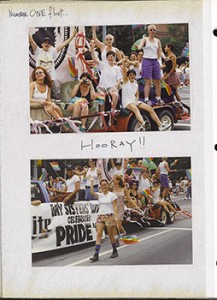 And this documentary element is part of what makes these albums so remarkable and valuable to researchers and others interested in histories of Atlanta. These intimate, “slice of life” photographs enrich MARBL’s preexisting Atlanta and LGBT collections by offering insights into 1990s lesbian communities and culture. As Soble notes, the albums reflect the “lesbian uniform of the 1990s” comprised of “v-necks, cut-off shorts, and black boots” and “overalls and plaid shirts.” Several albums are devoted to Atlanta Pride and provide a lesbian perspective on Pride participation and traditions. For example, Soble photographed a local chapter of the Lesbian Avengers, a lesbian direct action group founded in New York City in the 1990s, during Atlanta’s first Dyke March. Some of the photographs feature other prominent Atlanta figures like the late Ria Pell, a well known Atlanta chef and restaurateur.

Little did Soble know that her photographs of playful and poignant moments shared among friends and family would one day have meaning beyond the artist’s intimate circle. It’s Soble’s hope that “fifty to one-hundred years from now, these albums will provide insight into life in turn-of-the-century Atlanta.” Soble, who has devoted much of her time of late to painting and exhibitions, says that she hopes to soon return to photography. While she looks forward to capturing life in contemporary Atlanta, her albums of the past will forever persevere a bygone era of local history.