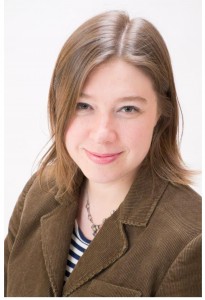 I spent a week in the Emory Stuart A. Rose Manuscript, Archives & Rare Book Library reading Ted Hughes’s notes and drafts for Crow: From the Life and Songs of the Crow and Cave Birds: An Alchemical Cave Drama.  I am researching Hughes’s use of stories from The Mabinogion—  a collection of Welsh myths recorded in the Middle Ages– as substructures for some of the poems in Crow, Cave Birds and his late collection Howls and Whispers. Part of this research appears in my article “The Remains of Something: Mabinogion Myths as Poetic Substructures in Crow and Cave Birds” which appears in The Ted Hughes Society Journal (July, 2016). I am fascinated by how these Welsh myths lurk narratively and imagistically behind some of Hughes’s poems, and I went to Emory hoping to better understand how these substructure were built. Did Hughes write any notes explicitly referring to to his use of these myths? And how did he draft the poems themselves?  Did his early drafts recapitulate the myths more closely? Did he write drafts that slowly evolved towards resembling the myths?

He seems to have done some of both. I was most struck by the difference between the published Cave Birds poem titled “The Plaintiff” and an early draft of the poem strikingly entitled “A Hermaphroditic Ephesian Owl.” In her book Ted Hughes: The Poetic Quest, Ann Skea argues that this poem– and the penultimate poem of the collection, “The Owl Flower,” echo the Mabinogion myth of Blodeuwedd who murders her husband, Llew Llaw Gyffes. A magician initially creates Blodeuwedd out of flowers– meadowsweet, oak and broom. Later, however, she helps her lover to kill her husband, and the same magician curses her and turns her into an owl. The resonances between the title of “The Owl Flower” and this myth are clear, and the published version of “The Plaintiff” is also brimming with melded avian and plant imagery.

The first stanza, for example, contains the line,

In the early draft I examined at Emory, these lines are absent. In the draft, bird and plant imagery are juxtaposed but not conflated. Hughes writes, for example,

What is this thing, feathering and ruffling?…

The title’s reference to the an owl make the poem’s allusion to Blodeuwedd more specific, however, and the owls’ hermaphroditism is fascinating and intriguing. At the very least, this conflation of genders mirrors the conflation of plants and birds in the published poem–categories are blurred, confounded and melded. Learning that the bird Hughes had in mind as he wrote of feathers and leaves was, indeed, an owl heightens the echoes between this poem and the Mabinogion tale.

The ending of the published version of “The Plaintiff” again combines birds and flowers. The last lines describe how the victim lodges in the protagonist’s chest and describes her as a “humbling weight” which makes breathing difficult. Finally, Hughes describes the victim as

Your heart’s winged flower come to supplant you.

By contrast, the earlier draft, again, juxtaposes but does not meld the botanical and avian images:

And your head is ringing…

Too rooted for the ear, your blood-fed flower 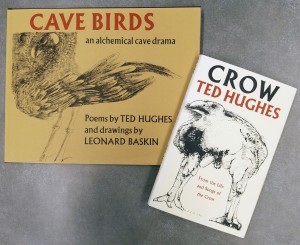 Writing to Ann Skea, Hughes described the complex narrative superstructure of Cave Birds. All of the poems work together to create a story about accusation, condemnation, death and–ultimately–transformative rebirth. He called the book “an alchemical cave drama” because the protagonist is transformed  just as, in alchemy, base metals transmute into gold. Hughes claimed, “The plot consists of two parallel ‘stories.’ In the one, the dramatis personae are birds. In the other, a man and a woman. My starting point was the death of Socrates. The crime for which he is judged, and which he expiates… is… the murder of the Mediterranean Goddess (as Mother and Bride)”(Ted Hughes, Letters of Ted Hughes, 491-2) In the book, a male character is tried for the murder of a female victim. The fact that Hughes used The Mabinogion tale of Blodeuwedd and her slain husband Llew Llaw Gyffes as a substructure for many of the poems, however, creates an intriguing tension with the collection’s explicit narrative arc. In the book’s mythic substructure, the genders of the attacker and murdered are reversed. Bloduedd is, after all, condemned and cursed for a crime against a male victim. Looking at “The Plaintiff” in light of this Mabiongion tale fascinatingly conflates the plaintiff and the aggressor. (The poem is about the archetypal female victim, but the poem’s imagery evokes Blodeuwedd, who–in the tale–is the aggressor.)

Comparing the drafts of various poems in Cave Birds, including the drafts of “The Plaintiff,” was like watching an image sharpen as a pair of binoculars slowly focuses. Hughes begins with the rough, explicit image of an owl in the title of “A Hermaphroditic Ephesian Owl.” The image of the owl gradually submerges itself in the poem’s imagery which, in the published version, creates a clear imagistic hybrid of a bird and a plant– an homage to Blodeuwedd’s transformation from flower-woman to owl.

Hughes was fascinated by both mythology and shamanism. In its simplest form, shamanism is a healing practice found in many cultures around the world. It’s aim is to take a metaphorical journey into the spirit world in order to bring back knowledge or healing. As part of this journey, the shaman often changes shapes and becomes different animals or order to achieve various quests. The myriad transformations in Mabinogion myths mirror the shape shifting integral to shamanic practice. 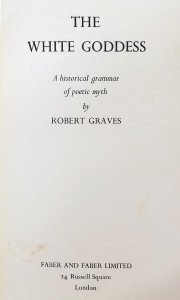 Hughes owned a plethora of books about mythology, shamanism and mysticism— several of which recount key Mabinogion tales. It was a pleasure to spend hours leafing through these books and gaining insight into the broad mythological framework that underlay both Hughes’s poetry itself and his overall thoughts about poetic process. Hughes’s grammar school teacher, John Fisher, gave him a copy of Robert Graves’s The White Goddess as an academic prize. Seeing this book was a particular pleasure; Hughes underlined it extensively, and his markings reveal his interest both in particular myths and in overall ideas. He repeatedly marked, for example, passages in which Graves claims that the sacred nature of poetry can be “historically” traced back to Celtic bardic traditions. Hughes marked several of Graves’s assertions that the bardic tradition was venerated more in Ireland and Wales than in Anglo-Saxon culture. Perhaps these claims helped fuel Hughes’s fascination with Celtic bardic traditions, and perhaps they underlay his interest in using Welsh myths as substructures for poems which grapple with the transformative capacity of poetry.

In a long note scrawled in a notebook full of drafts for Crow poems, Hughes wrote about his idea that shamanism and poetry are fundamentally connected and that poetry is, at heart, a healing process. Interestingly, several of Hughes’s books including Johns Matthews’s The Celtic Shaman equate shamanism with early Welsh bardic traditions.

In the same notebook, Hughes wrote, “Writing his poetry, every poet produces or tries to produce the thing in poetry that makes him need poetry.” (Ted Hughes papers, Box 57, FF 15, Notebook 10).  Reading through page after page of scrawled Crow drafts was a fascinating glimpse into what kind of poetry Hughes tried to write—and what kind of poetry he needed. His poetry is deeply infused with images of magic and mythology, of shamanism and transformation. His poems chronicle moments when one things turns to another. These transformations offer the possibility of transcending bounds and of finding healing by escaping the seeming immutability of chronological progression.

Hughes shared a generative collaboration with the American artist Leonard Baskin who illustrated both Crow and Cave Birds. A flyer for The Complete Works of Leonard Baskin, a handsome edition of Baskin’s prints,  is tucked into a box of letters between Hughes and Baskin. The flyer quotes Ted Hughes’s description of Baskin’s prints: “They remind me… of a primitive hunter’s X-ray drawings of a creature’s essence.” (Ted Hughes papers, Box 1, FF 13)  Poring over Hughes’s drafts provided an x-ray image of the essence of the poems, a glimpse of the mythic forms and concerns that acted as skeletal structures for the finished drafts.