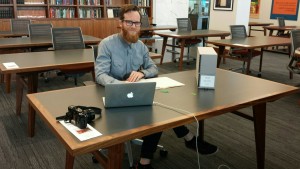 Andreas Till is a graduate student in Photographic Studies (M.A.) at the Dortmund University of Applied Sciences and Arts in Germany and a photo editor at Spiegel Online in Hamburg. In 2010, he received a Fulbright scholarship to the Fine Art Photography program (M.F.A.) of the Ohio University in Athens, OH.

In April 2016 Andreas Till spent one month in Atlanta to conduct research in the Rose Library for the purpose of completing a graduate thesis in Photographic Studies. His thesis focuses on the influence of the presence of American troops in his hometown Heidelberg on the relationship between Germans and Americans between 1945 and 2013. His research is based on found footage material from various archives such as the Rose Library in Atlanta or the Archive of the City of Heidelberg as well as various personal collections.

Recently, I received an email from Carrollton, GA, that ultimately let my mind wander and take me back to Atlanta where I first arrived at Emory University about seven months ago. I had flown in from Hamburg in Germany in order to do a good part of my thesis research on the former anti-segregationist editor and publisher of the Atlanta Constitution: Ralph Emerson McGill. Notably, Mr. McGill was not only an important figure in the history of Atlanta. He was also a true friend to my grandmother Else Volkwein and a great benefactor to my family on the maternal side.

My grandmother and Mr. McGill first met in Heidelberg in 1946 just after the end of WWII, when she was 12 years old and he was 47. At the time, Mr. McGill was touring Europe with the A.S.N.E. (American Society of News Editors) in order to promote freedom of press in war-ridden European countries. On 26 January 1946, he and his fellows went on a day trip from Frankfurt to the city of Heidelberg. Food and housing were scarce there, but since the city had largely been spared from American bombs, it was still intact and habitable. This was probably due to the fact that the US Army planned to build their European headquarters in Heidelberg. From 1945 until 2013 the USAREUR Headquarters was located in the city of Heidelberg. 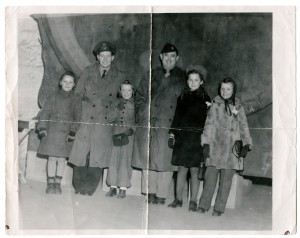 A must-do for everyone who visits this romantic and picturesque city on the Neckar river is to dwell at the Heidelberg Castle and enjoy the great view over the river valley. So did Mr. McGill and his fellows that Saturday, while my grandmother and her girlfriends relished in the castle garden on a day off from school. The Americans asked Else and her friends to pose with them in front of the huge wine barrel in the castle’s basement for a souvenir photo.

Ralph McGill had a distinct motivation to care for children. Before he met my grandmother, Mr. McGill had already assumed sponsorship for three young indigent Native American girls who lived on reservations in Georgia. He said, “It was our responsibility that the children of postwar Germany should not grow up as the monsters their parents had become after growing up in a defeated Germany after World War I.”[1] Apparently, my grandmother reminded Mr. McGill of someone he once knew back in East Tennessee where he was born, so he took her address before they went apart.

Soon after, C.A.R.E. packages from the United States arrived at the small Rohrbach house. Apart from canned food, those packages also contained money, clothes, and American chocolate, which, of course, was the kids’ favorite. According to my grandmother, she and her friends stayed home from school the next day as all of them, unsurprisingly, had sore tummies. Naturally, being visited by an American foreigner was a big deal. Especially when that foreigner also brings gifts. However, this was not the last time Ralph McGill visited Else. After he had run a background check on Else’s parents and found no association with the Nazi regime, Ralph McGill visited her four more times. He also became godfather to my uncle, who carries the same name as Mr. McGill: Ralph Emerson (Volkwein).

My uncle was also the one who first showed me a little cardboard box that contained copies of certain documents that were exchanged between my grandmother and Ralph McGill. Those documents bear witness to an unlikely German-American friendship that lasted for more than 23 years. The originals are at the Stuart A. Rose Manuscript, Archives, & Rare Book Library at Emory University. Two folders filled with personal correspondence, such as letters, postcards, and photographs were exchanged between Else and Ralph telling about their mutual wish to keep each other informed about their lives. Of course news about their children was always most important, but also major events in American politics such as the assassination of President John F. Kennedy were discussed and bemoaned. Each year at Christmas time, “Uncle Ralph” as the Volkweins called him, would send season’s greetings and ten dollars to buy a present for “little Ralph.”

Reading those letters was exciting and touching. Leafing through the originals invoked a feeling of connectedness and understanding of my own roots through the stories of others.

Months before, I had made appointments with Rose Library in order to ensure a smooth operation as soon as I got to the Emory campus. In Kathy Shoemaker, who is a Reference Coordinator at Rose Library, I met someone who was incredibly dedicated to helping me find what I needed and who was genuinely intrigued by my research. She went out of her way to provide me with additional information, important contacts, and a friendly smile each time we met in the morning. Most notably, it was her who made it possible for me to meet with one of the few people who actually knew Ralph McGill – a contemporary witness.

Mary Lynn Morgan lived in a Buckhead retirement home. She was Ralph McGill’s second wife and a very well-known Atlantan herself as she had been a pioneer in children’s dental care in the 1940s and, later on, an Emory trustee. Mary Lynn and Ralph married in 1967. He died in 1969. However, despite the little time the two of them had together, their bond was strong.

“We had great fun, not just sometimes, but every day. We knew how fortunate we were and said so many times. I looked forward every day to meeting him in the afternoons when I picked him up after I left my office […] He looked well, felt good. We were hoping for many years like this, but his heart wasn’t good enough to make it.”[2]

Afterwards, Mrs. Ralph E. McGill, as her letterhead reads, frequently sacrificed her weekends, in cooperation with Grace Lundy, Ralph McGill’s assistant, to work through his personal assets such as books, letters, papers, and manuscripts which she finally, after considerable thought, donated to the Special Collections Library at Emory University. It was tedious and time-consuming work, but, after all, it was a way for her to learn more about Ralph McGill’s activities before she knew him well.[3] If it hadn’t been for her and Grace those valuable insights into the life of Ralph McGill would not be possible today.

Women have played an important and enabling role in ensuring Ralph McGill’s legacy and making it available to the public. There was Grace Lundy, who “saved” many documents despite Mr. McGill’s inability to keep order on his desk. It was also Grace who did the Christmas shopping for my grandmother’s presents. And it was her who typed most of those letters that I keep at home in an archival box. Together with Mary Lynn, she was responsible for the Stuart A. Rose Manuscript, Archives, & Rare Book Library gaining possession of such a comprehensive collection. And finally, Linda Matthews, former Vice Provost and Director of the Robert W. Woodruff Library at Emory University, was the one who, in consultation with Mary Lynn, built the Ralph E. McGill collection as we know it today. 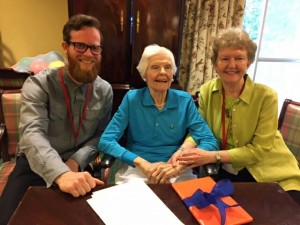 So, thanks to Kathy Shoemaker, on 26 April 2016, I met with Linda Matthews and Beth Graf, one of Mary Lynn’s three nieces in the Buckhead retirement home where Mary Lynn had lived for some time. She looked gorgeous and was surprisingly appreciative. I brought a letter that my grandmother had received from Mary Lynn months after Ralph McGill’s death. Linda Matthews was kind enough to read out those very words that Mary Lynn had written herself more than 45 years ago. It was a demanding task as the letter was handwritten and six pages in length. Yet, it was much worth the effort. Mary Lynn exerted herself to absorb every single sentence. She seemed to enjoy all those memories that were conjured up by the letter. Before we said goodbye, I received a gift from her and Beth. A privately printed book which is a compilation of selected quotations of Ralph McGill’s daily columns that had appeared in the Atlanta Constitution for more than 30 years. I am now the proud owner of one copy out of a 25 copy edition.

One day, when scanning folder by folder of the Ralph E. McGill collection, I found a postcard that was sent by Mr. McGill in spring 1967. It is addressed to Mary Lynn Morgan, whom he hadn’t yet married at the time. On the front, it shows three little black and white pictures of a 1960s new housing estate in the forests above Heidelberg. On the back, Ralph tells Mary Lynn that he just promised to the Volkweins that he will bring her to Heidelberg one day. He couldn’t keep his promise. Ralph McGill passed away two days before his 70th birthday. He and Mary Lynn never made the trip. My grandmother and Mary Lynn never met. Naturally, I felt enormously privileged. Not only because I knew about the uniqueness of this meeting, but also because I felt so welcome and most importantly, because I could actually do something my grandmother never could. I met someone my grandmother always wanted to meet, but never had the chance to. I felt proud to be able to do that in her place. 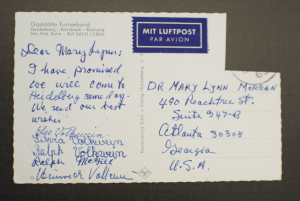 Not even three months after Mary Lynn and I met, I was delivered the sad news that she had passed away on 20 July after a period of declining health. Given the special nature of our encounter and the connections that have sprung from and around it, I feel lucky to have had the chance to meet her. It means a lot to me.

[2]On Thanksgiving Day 1969, Mary Lynn Morgan wrote a six-page letter to my grandmother, telling her about her family, her life before she met Ralph McGill, her admiration for him, and her thoughts about his passing away. The letter was part of a cardboard box in which my uncle had collected relevant documents that concern his personal links with Ralph McGill.