Last week, President-elect Trump provoked controversy with a tweet: “Nobody should be allowed to burn the American flag – if they do, there must be consequences  – perhaps loss of citizenship or year in jail!” Trump’s tweet came in the aftermath of a controversy at Hampshire College in Massachusetts. Students had lowered the flag on November 9th in “reaction to the toxic tone of the months-long election.” A few days later, an unknown party burned the flag. Trump’s tweet elicited a staunch rebuke from the media and public commentators. The New York Times, for example, reported: “Trump Calls for Revoking Flag Burners’ Citizenship. Court Rulings Forbid It.”

The New York Times was right. Indeed, two decisions from the Supreme Court make Trump’s demands for “consequences” unconstitutional. First, in the 1967 Afroyim v. Rusk decision the court ruled that the U.S. government could not strip American citizens from their citizenship. Secondly, in the 1989 Texas. v. Johnson decision, the court ruled that burning an American flag was a form of political speech protected by the First Amendment, and struck down the criminal laws banning such action in the 48 states that had adopted such legislation. This latter ruling infuriated a number of Americans, which prompted Congress to take action.

In late October 1989, only four months after the Supreme Court decision, President George H. W Bush signed into law the Flag Protection Act. On the very day that it took effect, a number of Americans tested the new law by burning a flag, including Shawn Eichman who did so on the Capitol’s steps. Eichman and a number of fellow protesters were immediately prosecuted. Eight months later, the Supreme Court spoke again, striking down the Flag Protection Act in the United States v. Eichman decision. Since then, anti-flag burning congressmen and congresswomen have attempted to pass a constitutional amendment stating that “Congress shall have power to prohibit the physical desecration of the flag of the United States.” While the House of Representative has voted for the amendment on numerous occasions, it has never passed the Senate. As a result, flag burning remains to this day an act protected by the First Amendment. 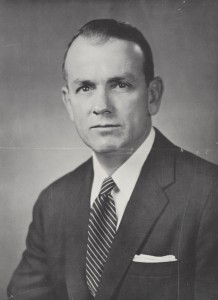 In 1989, when Congress was considering enacting the Flag Protection Act, Atlanta attorney Randolph Thrower, whose papers reside at the Stuart A. Rose Manuscript, Archives, and Rare Book Library, was appointed by the American Bar Association (ABA) to chair a task force charged with making recommendations to Congress on the matter. Thrower’s task force quickly produced its report so that the views of the ABA could be considered before Congress took action. The report, written by Thrower, was unambiguous about the need for the ABA to “voice its strong opposition” to Congress criminalizing flag burning either by enacting laws or a constitutional amendment. It stated that “criminalizing a symbolic protest because it is offensive to a large majority of the people would create a dangerous precedent for the future when other very offensive symbolic protest may arise.”

For Thrower and his task force, the First Amendment was meant to protect speech precisely when “it is seriously offensive to many.” Otherwise, the celebrated tradition of freedom of speech in the country “becomes a hollowed principle.” “All through human history, tyrannies have tried to enforce obedience by prohibiting disrespect for the symbols of their power,” Thrower wrote, before concluding that the “American flag commands respect and love because of our country’s adherence to its values and its promise of freedom, not because of fiat and criminal law.” A week after completion, Thrower’s task force report and resolutions were adopted by the ABA. However, a number of delegates were concerned about how the public would receive the report and added a statement deploring flag desecration, as well as a promise to open all future meetings with the Pledge of Allegiance. The Randolph Thrower papers contain a wealth of resources documenting the work of the ABA Task Force on the flag burning controversy. 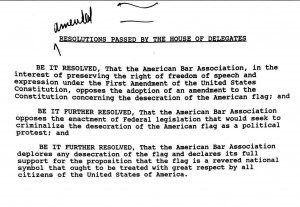 Randolph Thrower, who specialized in federal tax laws, was born in 1913, the year of the ratification of the 16th amendment. Shortly after obtaining his law degree at Emory University in 1936, Thrower established himself in Atlanta, where he became a partner at the law firm Sutherland, Asbill & Brennan. After helping to revive the Republican Party in Georgia in the 1950s and early 1960s, Thrower was appointed by President Richard Nixon as Commissioner of the Internal Revenue Service in 1969. In that role, he was instrumental in revoking the tax-exempt status of a number of private schools that did not admit African American students. However, after refusing to use the agency to intimidate Nixon’s enemies, Thrower was forced to resign in 1971. Thrower was deeply involved in the American Bar Association, and also served as president of the American Bar Foundation. He was a member of the ABA’s first Commission on the Status of Women in the Law, which was chaired by Hillary Clinton. All of these facets of Thrower are well documented in his papers.

For more information on the flag burning controversy, see:

Robert Justin Goldstein, Desecrating the American Flag: Key Documents of the Controversy from the Civil War to 1995, Syracuse University Press, 1996