Today we celebrate the inauguration of Dr. Claire Sterk as the 20th president of Emory University. On this occasion, we take a look back at the evolving nature of the inauguration ceremony as well as the founding documents of the institution. 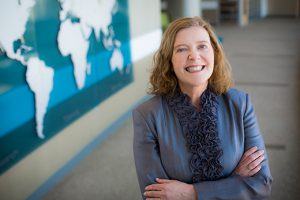 The first and second inaugurations that occurred at Emory University in Atlanta were modest affairs. Dr. Harvey W. Cox’s inauguration was the first to occur at the institution’s new campus after moving from Oxford, GA. In 1920, Emory University was still growing, and as a small collection of schools, did not incorporate much pomp and circumstance into the ceremony. The next inauguration was somber for different reasons. In the fall of 1942, the ongoing war led to a simplified ceremony for Dr. Goodrich White. 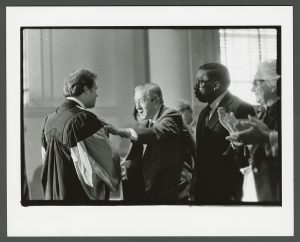 It was not until the inauguration of Walter Martin in 1957 that the tradition of more complex, formal ceremonies began. Festivities commenced the night before the actual inauguration with a dinner for the new president and many of Atlanta’s civic and business leaders. The procession itself involved over 700 attendees and representatives. The 1995 inauguration of William Chace gave greater honor to Emory’s Oxford legacy by incorporating an additional ceremony at the Oxford campus. This was one of the more elaborate ceremonies, and involved the commission of a piece of classical music from Emory faculty member John Anthony Lennon entitled “Cor Prudentis” after the Emory motto. In recent years, the ceremonies have become more inclusive. The 2004 inaugural ceremony of James Wagner involved blessings from multiple faiths (in order of appearance: Islamic, Hindu, Jewish, Bahá’í, and Buddhist) rather than the traditional Christian prayer.

Despite the many differences in inaugurations over the years, there remains a multitude of similarities. Each new president makes an effort to recognize Emory’s many strengths within their speeches, often emphasizing strength through unity. And each ceremony has incorporated many symbolic pieces of Emory history, like the 1836 charter.

The modern institution’s charter was originally instituted in 1905, but the document can be traced back to Emory College’s founding in 1836. The Board of Trustees occasionally reexamines the charter and makes changes when necessary. Its most recent incarnation was issued on February 14, 2008. The following is a brief, succinct summary of key points in that document.

Why is it important to know these things, and anything else in the document?

Many stipulations of the charter are evident in the work the University undertakes on a daily basis. Its theology programs are still active and growing; its focus on healthcare is a legacy of the desire to provide students with useful resources that benefit humankind. In addition to services provided to the student body, Emory also contributes to the surrounding area on a daily basis. Emory University has left a legacy of benevolence in its community, and this charter provides the basis for that legacy. To understand the charter is to understand the institution.

The Rose Library proudly houses many historic documents related to the founding and continuation of Emory’s mission and purpose. From the original charter itself, to the papers of previous presidents and professors, to original court transcripts from the court case that allowed integration, the archives at the Rose Library provides important evidence regarding the history of Emory.