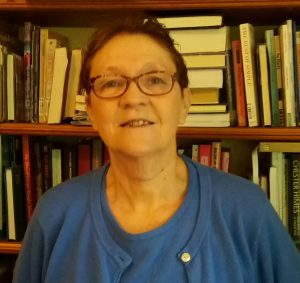 I am a PhD candidate at Liverpool Hope University, UK, researching the work of African American playwright Alice Childress (1916-1994). A short-term fellowship from Emory University enabled me to access the fantastic facilities of the Stuart A. Rose Manuscript, Archives, and Rare Book Library in early November. It was a huge bonus that my visit coincided with the excellent exhibition “Still Raising Hell: The Art, Activism, and Archives of Camille Billops and James V Hatch,” curated by Pellom McDaniels, III. I spent several hours there during the week. Now back at home, I am trying to organise my extensive notes, photographs and photocopying from my time in the Archives.

Childress, who lived and worked in Harlem, had a career that spanned five decades. My research question is why, despite many awards and accolades, Childress’s cultural production remains under-estimated and under-valued. Although best known as a playwright, Childress was an actor and all-round theatre professional for a decade before she wrote her first play in 1949 whilst a member of the American Negro Theatre (ANT). Among her best known plays are Florence (1949), Trouble in Mind (1956), Wedding Band (1963) and Wine in the Wilderness (1969). Later in her career Childress wrote several works of children’s fiction including A Hero Ain’t Nothin’ But a Sandwich (1973), which was adapted into a film in 1978, and a Pulitzer nominated novel, A Short Walk (1979). Additionally, Childress was a life-long political activist, campaigning for union rights for theatre workers, and against racism and sexism wherever she encountered it. 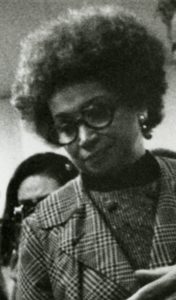 The development of the Black literary left during the 1950s and 1960s (which is the focus of my research) is particularly important to an understanding of Childress’s reception and legacy: the 1950s, because of the distorting effect of Cold War politics on Black artists, and the 1960s, because of the growing militancy of the Black left and the emergence of the Black Arts Movement (BAM). As the first phase of my research is an examination of Childress’s involvement in theatre, I was keen to explore the Camille Billops and James V.  Hatch Archives at Emory University. The collection includes rare and out-of-print books, periodicals, posters and pamphlets of African American arts and culture, oral history interviews with over 1,200 artists and cultural figures, and scripts of nearly 1,000 published and unpublished African American authored plays. My requests included the two taped interviews of Alice Childress by James V. Hatch from February 1971, the script of her 1965 play, The World on a Hill, which I was unable to obtain in the UK, a 2006 PhD thesis (now under contract for a book) by Dr. Jonathan Shandall on the American Negro Theatre, and, otherwise unavailable, scripts of plays by artists that Childress had either mentioned or been influenced by. Additionally I requested access to papers in the collections of two of Childress’s collaborators and friends: John O. Killens and Sarah E. Wright. As I hoped, their papers revealed insights into some of the organisations and campaigns in which Childress was involved during the late 1950s and early 1960s.

The Hatch interviews with Childress, whilst covering a wide range of topics, revealed Childress’s profound commitment to Black theatre. I was struck by her extensive knowledge of theatre-craft and her belief in the role of the artist in society. Committed to reaching a Black audience, Childress tells Hatch that most of her productions were held in churches, halls, basements and libraries. Whilst she was committed to reaching her audience wherever they were, she said that there was nothing noble about black playwrights being confined to “back-alley” venues. I am interested in how she felt when, during the period of the Black Arts Movement, some artists felt that even these small community venues constrained their message. Childress never had a play on Broadway, although her plays were optioned on many occasions. She would have loved to have access to a large stage with wonderful technical facilities and comfortable seats for people who usually had to sit on wooden benches, she said. But Childress was not prepared to pay the price of unacceptable changes to her plots, or agree to under-the-counter arrangements that undercut the terms and conditions of theatre staff. She expressed strong anger at the difficulties facing both Black playwrights and actors.

Dr. Jonathan Shandall’s PhD thesis about the American Negro Theatre (ANT), a cooperative that formed in 1940 and lasted for over a decade, is a timely study. Whilst Hatch states that the ANT was the most important African American theatre company since the African Grove Theatre of 1821, ANT’s role is usually confined to a short paragraph in a longer text. Shandell’s study re-evaluates ANT’s place in the trajectory of black theatre, arguing that it was located between an inter-racialism associated with the Civil Rights Movements of the 1940s and 1950s, and an ethno-centrism which became the dominant ideology of the mid-1960s. ANT, he argues, drew on the range of diasporic material of African origins as well as material drawn from the European experience of African Americans. Shandall’s thesis helped to explain the foundational influence of ANT on Childress, something she referred to in her interview with Hatch, describing her time there as the best period of her artistic life. She also said that there had been an attempt to re-establish ANT some years later. Evidence of this can be found in communication between John O. Killens and the Ford Foundation in 1962, when a group convened by Killens made a grant application to re-establish ANT. The correspondence reveals that some of the funding body’s conditions, including in the appointment of a board and senior staff, resulted in impasse. 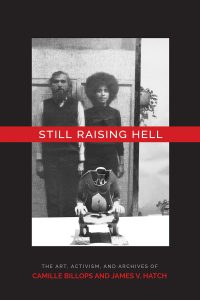 The exhibition “Still Raising Hell: The Art, Activism and Archives of Camille Billops and James V. Hatch” provided a beautifully presented context for my studies; it was like a soundtrack to Childress’s artistic life! Programmes and posters from Hatch’s papers reminded me of Childress’s admiration for the talented African American performers such as Bert Williams and George Walker, Aida Overton Walker, Florence Mills and Laura Bowman who achieved great levels of artistry in the face of segregation and discrimination.

Whilst Childress wrote two of her best known plays during the 1960s she is seldom referred to in the context of the Black Arts Movement, and there is no reference to her in this section of the Billops Hatch exhibition. She shared many values and beliefs with BAM artists and strongly believed in a black aesthetic: as early as 1951 her paper “For a Negro Theatre” was published in Masses and Mainstream. The reasons for the distance between Childress and BAM and the impact on how she is remembered forms an important part of my research.

Another section of the Billops Hatch exhibition focuses on the 1969 Metropolitan Museum of Art, New York exhibition “Harlem on my Mind.” According to the 1995 re-print of the catalogue displayed in the Emory exhibition, “Harlem on my Mind” aimed to be ‘a visual documentary history of the arts, letters, and social  and cultural institutions through which African Americans defined themselves between 1900 and 1968.’ 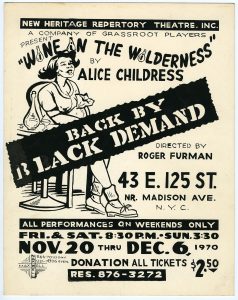 Mounted at the height of BAM and the Black Power Movement, and not long after Malcolm X’s assassination, the framing and content of “Harlem on my Mind” was potentially explosive. Camille Billops and Romare Beardon were amongst the Harlem-based artists, known as the Black Emergency Cultural Coalition, who protested both ‘the rejection of the black community’s suggestions about how it wanted to be represented’ by the Met, and the decision to exclude the work of major Harlem-based artists. Childress made her own protest, claiming that the exhibition lacked both ‘the breath of life’ and a clear message. Her request for an interview with the museum was rejected, as was her alternative “Harlem on My Mind” paper, submitted to Ebony in 1971. In 1969 she completed her play Wine in the Wilderness which addressed the theme of artistic representation of African Americans.

I would like to thank Kathy Shoemaker and all the staff for making my time at Rose Library so easy and enjoyable. I am confident that access to these valuable resources during my first year of study will enrich my research, and help to bring Childress’s important contribution to art and politics to a wider audience.