Over the past three years, a large part of my research as a medieval art historian has been on a manuscript of Las Cantigas de Santa María, a 13th century Spanish collection of miracle stories performed by the Virgin Mary. The manuscript is currently kept in the library of El Escorial, approximately 4,000 miles away from Atlanta. Even if it were logistically possible to fly to Madrid every time I needed to look at the manuscript, it is nearly impossible for most scholars to be granted access to the Cantigas because it is such a precious piece of Spanish national patrimony. The problem of accessing a priceless manuscript that is kept thousands of miles away is not a unique problem. Working as a medieval art historian in the United States is not an easy task: almost all of the objects we study are on a different continent. What’s a medievalist to do?

The solution to this problem is manuscript facsimiles, like the ones kept in Rose Library. A facsimile is an extremely accurate copy of a manuscript, reproducing the exact likeness of each manuscript page. Whereas an ordinary printed copy of a manuscript translates the medieval script of the text into a modern font, a facsimile preserves the actual appearance of the text, its layout, and its illuminations. Facsimiles give researchers and students access to manuscripts they otherwise might not be able to see, all while preserving the impact of interacting with a tangible physical object that no amount of high quality digitization can replace. 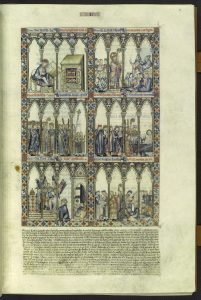 Like my undergraduate university’s library, the Rose Library has a facsimile of the Cantigas de Santa María (Escorial Codex T.I.1). The book is enormous, measuring approximately 14 by 20 inches and weighing around 30 pounds. Inside are the text of the miracle stories written in an ornate Gothic hand and the intensely detailed illumination cycles. This image shows the story of Saint Ildefonsus, who received a heavenly garment from the Virgin Mary as a reward for his devotion to her. The story stretches out across six panels, each with a small caption telling the viewer what is taking place in the scene. At the bottom of the page, in a nearly indecipherable 14th century cursive hand, is a transcription of the original Portuguese-Galician text (not the most well-known language, though favored by medieval Spanish troubadours) into Castilian Spanish. Clearly a later reader didn’t think others would be able to read the original story and wanted to make it accessible to a wider audience. Though there are several books that reproduce the text of the Cantigas in its original language, modern Spanish, and even English, it is only with the facsimile that you can see such details as the marginal scribblings and illuminations. 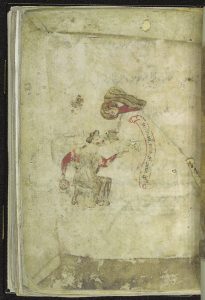 Another Spanish facsimile in the collection is the Códice de canto polifonico from the monastery of Last Huelgas in Burgos, a c. 1300 manuscript of Latin chants. The songs were probably compiled for the use of the nuns of Las Huelgas who would have performed some of the nearly 190 different songs during church services. Almost all of the book is comprised of the musical notation and words, with large red or black initials indicating where a new song begins. The facsimile is so detailed in its reproduction that it even has holes where they exist in the original manuscript and stitches where torn parchment needed to be sewn back together. The end of the codex is especially interesting. On one of the last pages, we see a heavily faded illumination of a seated man dressed in red and black robes. The divine hand of God emerges from a cloud to bless the man and offer him what appears to be a chained book (medieval monasteries often chained their books to desks in their libraries to prevent anyone from making off with what were an expensive and treasured monastic possession). The man points forward to a small speech scroll that reads: “In manus tuas domine commendo spiritum [I commend my spirit into your hands, Lord].” Perhaps this rough illumination of the seated man is meant to represent Johannes Rodriguez, one of the main authors, compilers, and scribes of the manuscript, who left his name inscribed on various other pages of the manuscript. 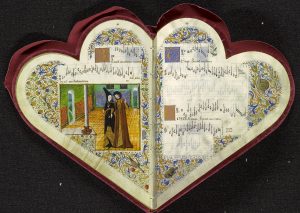 The Chansonnier de Jean de Montchenu (Bibliothèque Nationale, Rothschild 2973) facsimile is an example of a much more unusual musical codex. The manuscript is a cordiform, or heart-shaped, book made in the 1470s that contains secular songs in French and Italian. If the adorable heart-shape of the facsimile wasn’t enough to draw readers in, the manuscript begins with an illumination of a man and woman walking together in a room. These are clearly courtiers: the woman wears the fashionable conical hat known as a hennin and both are dressed in luxuriously gold-trimmed robes. The man’s mouth is open, and we could imagine that he’s singing the words of the song that surround the illumination, wooing his lady through the genteel art of courtly love. Around the edges of the pages, embedded in dense thickets of vines and leaves, are little marginal creatures: birds, a snail, a bear, and a man emerging from a flower to shoot an arrow. This facsimile lets us take a peek into a manuscript made for the elite of society. 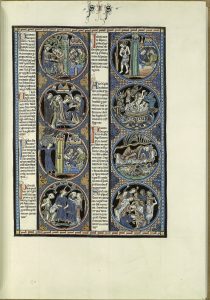 Yet even the Chansonnier cannot compete with what might be one of the most deluxe manuscripts—and facsimiles—of all time. Known as the Bible of Saint Louis, it belongs to a genre known as moralized bibles. On each page are eight roundels surrounded by text. The first part of the text text is a quote from the Bible, along with an illumination illustrating it in the accompanying roundel. Below that is an interpretation of the Bible verse—what it actually “means” for contemporary life in the Middle Ages—with an illustration of that allegorical meaning. Over the course of three deluxe volumes, this interpretive system is applied to all the books of the Old and New Testament. The immense amount of theological knowledge required to compose the text and the sheer extent of illumination and gold leaf used means that these volumes could only be the property of a king. And, in fact, the moralized bible was commissioned by Blanche of Castille for her son, King Louis IX, better known as Saint Louis. At some point, Louis gave the precious volumes to his cousin (kind of cousin—all the royals were related somehow in those days), King Alfonso X of Castille and León. After Alfonso’s death, they ended up in the treasury of Toledo Cathedral, where they are now kept behind thick glass in the cathedral’s treasury at all times. The only way to get a good look at all of those intricate illuminations that glitter with gold? Through a facsimile like the one at Rose Library.

Other medieval facsimiles of interest at the library

Ingeborg Psalter (Musée Condé, Chantilly, MS. 9 olim 1695) A c. 1195 Book of Psalms made for the first wife of King Philippe Auguste of France with an extensive illumination cycle. The gold leaf is reproduced so accurately that it feels like proper gilding in a real manuscript.

Codex Calixtinus A 12th century guide to the pilgrimage route to Santiago de Compostela, with advice on the best saints’ shrines to stop at along the way, which rivers are safe to drink from, and which roads are the best-maintained. Included in the book are the legend of how Saint James’s body ended up in Spain, miracles performed by James, and the legend of Charlemagne and Roland.

Squarcialupi Codex (Biblioteca Medicea Laurenziana, Med. Pal. 87) A manuscript compiled in Florence in the early 15th century, containing 353 secular songs in Italian from the 14th century. Not only is it the largest primary source of 14th c Italian music, but also author portraits of each composer and extensive decorative illumination and gilding.

Lorsch Gospels (Biblioteca Apostolica Vaticana, Pal. Lat. 50 and Biblioteca Documenta Batthyaneum, s.n.) A c. 778-820 Gospel Book made for Lorsch Abbey in Germany. Known as the “Codex Aureus” or “Golden Codex” of Lorsch, the letters are written in gold and each of the Gospels is decorated with an elaborate title page and an initial page.

Vernon Manuscript (Bodleian Library MS Eng. Poet. A. 1) An enormous medieval English manuscript written in a dialect of English from the West Midlands c. 1400. It contains hundreds of poetry and prose texts meant to instruct the pious and the texts are accompanied by countless illuminations.

This post was written by Nicole Corrigan, a PhD student in Emory’s art history department and Research Services graduate student in the Rose Library.