The Rose Library is proud to announce that the papers of Atlanta civic leader, Boisfeuillet Jones, are open and available for use.

From 1935 until his death in 2001, Boisfeuillet Jones influenced health, education, and welfare policy, and charitable actions on the national, state, and local levels. The Atlanta area especially bears Jones’ mark: the Boisfeuillet Jones Atlanta Civic Center on Piedmont Avenue honors his contributions to Atlanta’s arts scene, and numerous foundations and charitable organizations – such as Central Atlanta Progress, Inc. – were strengthened by his leadership for over 30 years.

The first question anyone asks about Boisfeuillet Jones is: how do you pronounce his name?  Francophones will tell you it’s something like “bwa-fwee-ay,” but Jones himself preferred “bo-fil-ay.”  He was “Bo” to his friends.  Others avoid mispronunciation entirely by using “B. Jones.”

The next line of inquiry is typically: who was he, and why is his name on an administrative building on Emory University’s main campus?

Boisfeuillet Jones (1913-2001) was born John Boisfeuillet Jones on January 22, 1913 in Macon, Georgia.  He graduated from Boys’ High School in Decatur in 1930, where he was active in the student government and student newspaper.  He then earned two academic degrees from Emory University: a Bachelor of Philosophy in 1934 and a Bachelor of Laws in 1937.  (See the 1934 and 1937 academic catalogs in the Emory University Archives for more information about these early degree offerings.)  While a student at Emory, Jones was a member of Omicron Delta Kappa, Phi Delta Theta, and Phi Delta Phi fraternities, as well as inter-fraternity groups.  He was active in student politics and also involved with the Emory Wheel, Glee Club, Debate Council, Athletic Association, and the International Relations Club.  The Rose Library also holds the papers of one of Jones’ Emory classmates and his life-long friend, Randolph Thrower.  Their shared love of politics and law at Emory led them both to federal government posts in Washington, D.C. and to local government posts in Atlanta later in their careers. 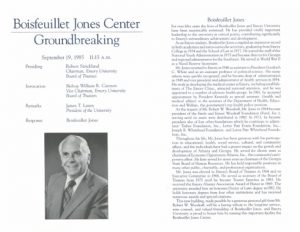 After holding administrative positions with the Georgia state and southeastern regional National Youth Administration from 1935-1943, Jones served as a Lieutenant in the United States Naval Reserve Bureau of Ordinance in Washington, D.C. during World War II.  Following the war, Jones was employed at Emory University, first as an Assistant Professor of Political Science and Assistant to the President (1946-1948), then as the Dean of Administration (1948-1954), and finally as Vice President and Administrator of Health Services (1954-1960).  It was his time at Emory–as an alumnus, employee, and Trustee–that marked the Atlanta campus with his name.  The Boisfeuillet Jones Center (currently home to Emory Student Financial Services) was built in 1985 to honor his contributions to the University, which include the Emory Clinic (now the Woodruff Health Sciences Center).  The courtyard next to the “B. Jones building” is the Anne Register Jones Courtyard, after his wife and fellow civic leader.

In 1961, Jones was appointed by President John F. Kennedy to serve as Special Assistant to the Secretary of Health and Medical Affairs of the Department of Health, Education, and Welfare (HEW), a position he held until 1964. 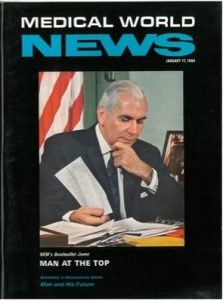 Jones’ papers from HEW are the most extensive professional record group in this collection.  The early 1960s were an incredibly active time for HEW; the African-American Civil Rights Movement was in full swing, Presidents Kennedy and Johnson were calling for various additional social reforms, and advances in medical science were rapidly changing how medicine was taught and performed, especially in the areas of mental and public health.  Jones’ role in health, education, and welfare legislation with HEW got him noticed in both national and local newspapers and magazines, and the combination of this expertise and publicity would serve him well in his later professional and civic roles.

In addition to his busy professional career, Jones held many civic positions in both national and local organizations.  At the national level, Jones was chair of the Committee of Consultants on Medical Research of the United States Senate Committee on Appropriations from 1959-1960.  He served as a member of the National Advisory Health Council of the United States Public Health Service (1956-1960), Advisory Committee on Health Policy of the Democratic National Committee (1960), and the American Academy of Political and Social Science.  Jones was also on the Board of Directors of the Independent Sector (1985-1991), a coalition of nonprofits and charitable foundations. 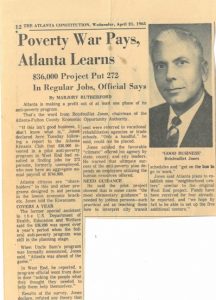 At the local level, Jones chaired the Georgia State Board of Human Resources from 1977-1984.  He was on the Board of Directors of Central Atlanta Progress (1985-1993), the Community Council of the Atlanta Area (1965-1972), the Southeastern Council of Foundations (1972-2001), and Economic Opportunity Atlanta (1964-1975).  In addition, Jones was a member of the Commission on Mental Illness and Human Services of the Southern Regional Education Board from 1968-1985.  Jones also served as Director of the Protestant Radio and Television Center (1961) in Atlanta, Georgia.  He was a member of the State Bar of Georgia, even though he never added “lawyer” to his lengthy resumé.