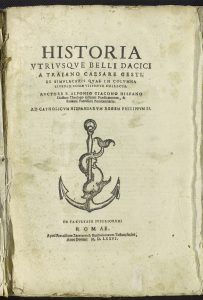 Alfonso Chacón lived from 1530-1599 CE and was a Spanish Dominican scholar in Rome. He was an expert of ancient Graeco-Roman and Paleo-Christian epigraphy and was knowledgeable in medieval paleography and manuscripts. His work Historia Vtriusque Belli Dacici a Traiano Caesare Gesti : Ex Simulachris Quae in Columna Eiusdem Romae Visuntur Collecta, published in 1576, provided the first full set of illustrations of the sculptural reliefs decorating the surface of Trajan’s Column. The copy owned by Rose Library is unusual, if not unique, due to the way that it is bound. In this copy, the 130 folding plates have been bound in pairs, so that more of the sculptural frieze can be viewed continuously. To accommodate this, a contemporary buyer made it into an oblong folio. These types of practical manipulations are rarely seen in the world of Baroque books which make this rare first edition even more valuable to viewers.

The subject of the engraved plates, Trajan’s Column, is one of the few extremely well-preserved outdoor monuments from ancient Rome. It was erected in 113 CE to celebrate the victories of the emperor Trajan (d. 117) over the Dacians. The architect Apollodorus of Damascus created the structure which stands 98 feet high and measures 11 feet in diameter. The helical spiral staircase located in the interior of the column was an important architectural innovation which was used to save space in subsequent Roman architecture. In addition, later rulers such as Antoninus Pius, Marcus Aurelius, and Napoleon used the idea of the victory column as a model to convey their power to the public. In this way, Trajan’s Column was used as a propagandistic tool, both for Trajan and the empire as a whole.

This propagandistic role was further enhanced by the subject matter covering the column. The entire surface of the monument features a sculpted marble relief in the form of a continuous narrative which, if unfurled, would measure 625 feet in length and wraps around the column a total of 23 times. The narrative, which depicts an account of the events of the Dacian Wars, contains over 2,600 figures, all embedded in incredibly detailed scenes of battle, ritual, and military and civilian life. Scenes of violence are few and Trajan is depicted as victorious over his enemy in scenes of the Dacians’ surrender. Additionally, Trajan’s tomb was placed at the base of the column, reinforcing his link to this strikingly powerful structure and its victorious subject matter. As a whole, the column provides modern viewers with an invaluable primary source concerning the events of the Dacian Wars. 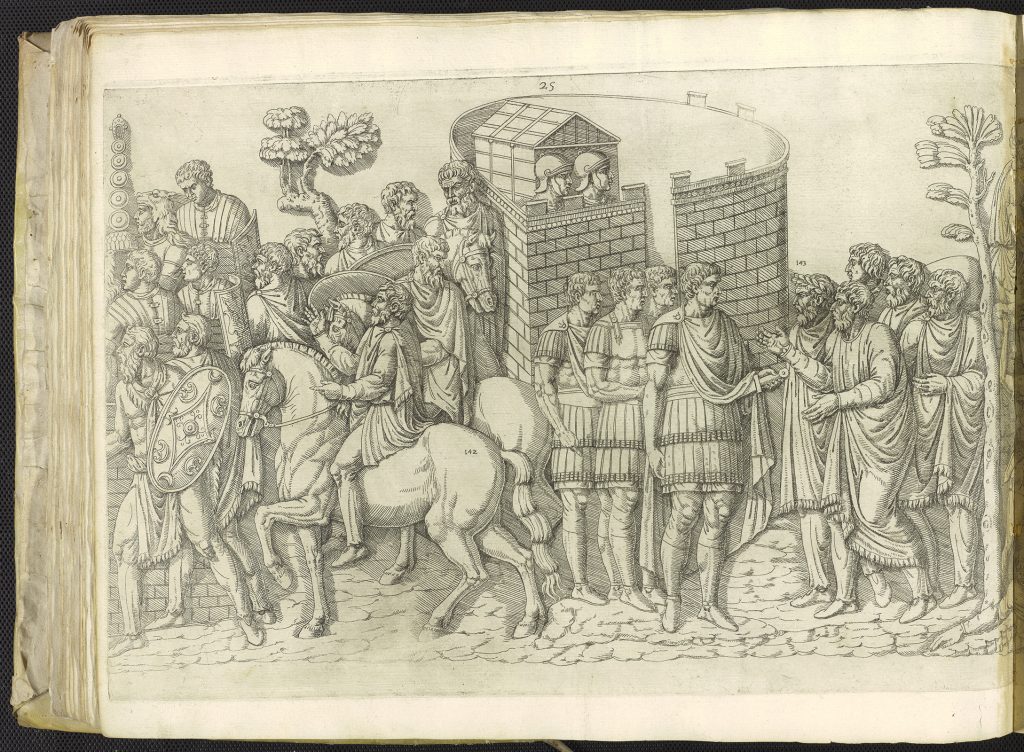 However, because the narrative relief is spread across the surface of the column which reaches high into the air, it was, and remains, difficult to see the details of the sculpture. Viewing any more than a few scenes at a time also proves difficult as they wrap around the column’s cylindrical form. In antiquity, there was no way to remedy this, although two libraries located near the column would likely have contained written accounts of the Dacian campaigns and the original drawings for the column. These, however, are lost to us.

In order to provide his contemporary audience with a more economic and detailed way of viewing the column’s relief, Alfonso Chacón compiled 130 engraving plates of the spiral relief, completed by Francesco Villamena, whose engravings looked to previous representations of portions of the relief. In particular, Villamena referenced drawings by one of Raphael’s most gifted pupils, Giulio Romano and engravings by Girolamo Muziano based on Jacopo Ripanda’s drawings. Ripanda was known for creating an optical device to see the details of the frieze more clearly and supposedly hung in a basket to do his drawings. Once Villamena had completed the engravings, Chacón then added 320 short texts which gave explanations of the scenes. 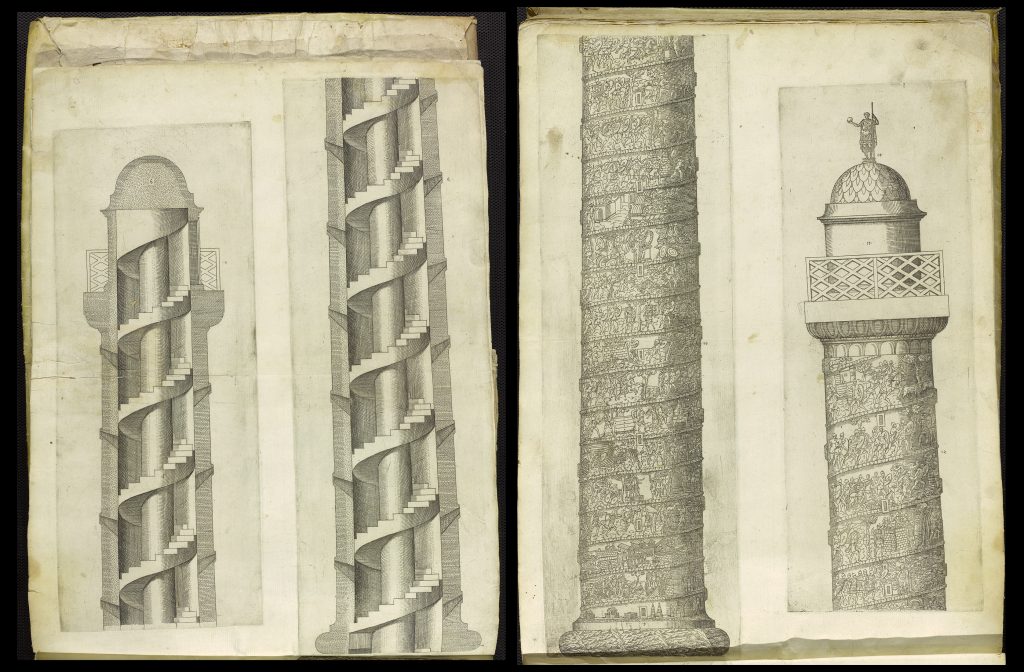 Not unlike Trajan’s Column itself, Chacón’s book served a propagandistic function. It was dedicated to King Philip II of Spain who was deeply involved in Roman ecclesiastical politics. He was credited with Pope Gregory XV’s election, one of the shortest conclaves in history, happening over the course of a mere 24 hours. Chacón’s dedication draws a direct comparison between Trajan’s martial exploits and those of King Philip II. Reinforcing this association is the fact that Trajan was also a Spaniard. In comparing Philip to Trajan, Chacón portrayed Philip as an effective, victorious and powerful ruler, much as Trajan’s Column originally served to portray the emperor in a positive light.

Later editions of Chacón’s work followed, including ones in 1585 and 1616, but the most influential was that of Giovanni Pietro Bellori and Pietro Santi Bartoli, almost 100 years later. The engravings for this 1673 edition came from a source other than Villamena and elaborates on Chacón’s original text. Rose Library also has a copy of this edition. Thanks to these separate acquisitions, patrons have the ability to view Chacón’s and Bellori and Bartoli’s editions side by side to see how the two works differ and complement each other!

Rose Library’s acquisition of Chacón’s publication means that patrons have the opportunity to experience the narrative of Trajan’s Column in a clear and ordered manner, sidestepping the obstacles of geographic separation and legibility which often impair viewing the original monument. In the end, Chacón’s work, although art historically and religiously motivated like many works published before him, presents us with the first example of a publication so thoroughly dedicated to any single monument, ancient or modern.

This post was written by Kelin Michael, a PhD student in Emory’s art history department and Research Services graduate student in the Rose Library.