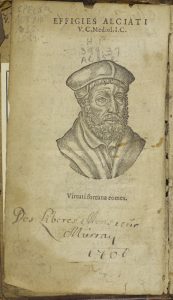 Emory University has an incredible collection of emblem books, largely thanks to the efforts of Asa Griggs Candler Professor of Art History, Dr. Walter Melion. The contents of this collection are divided between the Pitts Theology Library in the Candler School of Theology and Rose Library. Among Rose’s portion of the collection is a 1584 edition of Alciato’s Emblematum liber, or Emblemata.

Emblematum liber, or Emblemata is, without a doubt, Andrea Alciato’s most famous and influential work. Alciato is understood to be the father of the conventional emblem, a convention which was established in the first published version of this book. His original emblems contained a motto (inscriptio) and an epigram (subscriptio). The purpose of these emblems was to encourage erudite thinking and conversation. Clever dialogue was achieved by considering how the motto and the epigram related to and complicated each other. Emblematum liber originally contained no illustrations and Alciato intended it to be read only by a small circle of friends, as was tradition.

In 1531, Heinrich Steyner, a publisher in Augsburg, Germany, had other ideas. Without obtaining permission from Alciato, he published a version of his emblem book, now with an illustration accompanying each emblem. This addition of images finalized the format of the “conventional emblem”: the motto (inscriptio), picture (pictura), and epigram (subscriptio).

Alciato was understandably furious, as he viewed the images as ruining the careful balance he had crafted between the motto and epigram. However, after seeing the success the emblem book had (complete with added illustrations), he was appeased enough to allow the publishing to continue, although from then on Alciato himself had a hand in altering the images to better compliment his emblems. The addition of images immediately and permanently altered how emblems functioned. Instead of binary exchange between the motto and epigram, the image now moderated between the two components. The motto would put forth some sort of simple saying or moral which would install itself in the mind of the reader. Then, the image could illustrate the motto or complicate its interpretation by either closely depicting what the motto represented, or by presenting an image that seemed to have nothing to do with motto. The epigram would then proceed to draw an explicit or implicit connection between the motto and the image. The reader then had the option to return to the motto and image to search for more layered meanings and connections between the three components of the emblem. The cycle of entertainment and cleverness was endless. 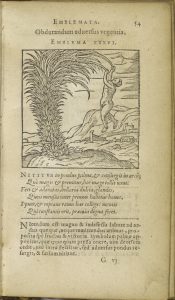 The production of emblem books grew at an exponential rate after Alciato’s original edition of his Embelmatum liber. Many other authors and artists created their own emblem books, but multiple editions of Alciato’s Embelmatum liber continued to be published and remained relevant to emblem culture. In fact, it was the most frequently printed emblem book with over 100 editions, published in Germany, France, the Spanish Netherlands, and Italy, before 1620. These later editions sometimes added whole new emblems (the number increased from an original 104 to 212 by 1550) and often substituted or replaced the woodcuts that accompanied Alciato’s original mottos and epigrams.

The 1584 edition that resides in Rose Library was published in Paris by Jean Richer who would go on to publish another five editions of Embelmatum liber. Not only does this edition contain an entirely new set of woodcuts but it also contains both Latin and French versions of the emblems. Originally, the emblems only appeared in Latin, but as they became popular, many publishers would hire people to translate them into various vernacular languages like Dutch, French, and even German, Spanish, and English. This way, more people could access and enjoy these puzzling pieces of work. This edition also includes an account of Alciato’s life (he died in 1550), which gave the reader an opportunity to learn about the man who had originally devised these emblems.

In addition to the new woodcuts and French translations, this specific edition contains another element that greatly altered the way emblems were read. Following each emblem, Claude Mignault, who also provided the French translations, provided a short commentary. He undertook the translation while traveling, which he mentions in the edition’s preface and aimed simply to convey to others the enjoyment he experienced while examining the emblems. 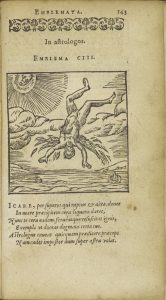 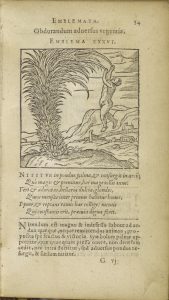 The commentary served to felicitate conversation and to help explain the complex connections created through the juxtaposition of the motto, picture, and epigram. This was one of, if not the first, instances of commentary appearing in the context of the emblem book. Previously, this commentary had come in the form of discussion between friends and colleagues as they attempted to decipher each emblem. Now, the commentary served to provide more immediate aid in untangling the connections found in these intricate 3-piece puzzles. Mignault kept these particular commentaries short, but as commentaries become more commonplace in the context of emblem books, they became, in some instances, incredibly long. Mignault himself tended to write extremely lengthy commentaries after this edition was published.

The 1584 edition of Alciato’s Embelmatum liber was instrumental in furthering the evolution of the structure of the emblem book. It added a brief commentary to each emblem, an account of the original author’s life, and a French vernacular translation, making the work more accessible to its original audience. Rose Library has an incredible work here and I hope that patrons will take the opportunity to access such an influential piece in the history of the emblem book.

This post was written by Kelin Michael, a PhD student in Emory’s art history department and Research Services graduate student in the Rose Library.