John Wamwara (SJD Candidate, School of Law) is 2017 –2018 Newton Teaching Scholar at the Rose Library. He is supporting the Rose Library Faculty Fellowship program and is reviewing the Rose Library’s collections on Africa. His doctoral research is on how law, religion, and culture have shaped the monogamy -polygamy debate in Kenya; and how this relates to the global debate on legalizing plural marriages.

At the height of the Biafran War (the war of secession fought between 1967 – 1970 by the Federal Military government of Nigeria and the Ibos of South Eastern Nigeria following the Ibo pogroms in other parts of Nigeria), John J. Stremlau decided to do something about it rather than read and mourn about it as a graduate student of Fletcher School of Law and Diplomacy. In 1969, he joined the Nigerian Institute of International Affairs as a research associate. It is this 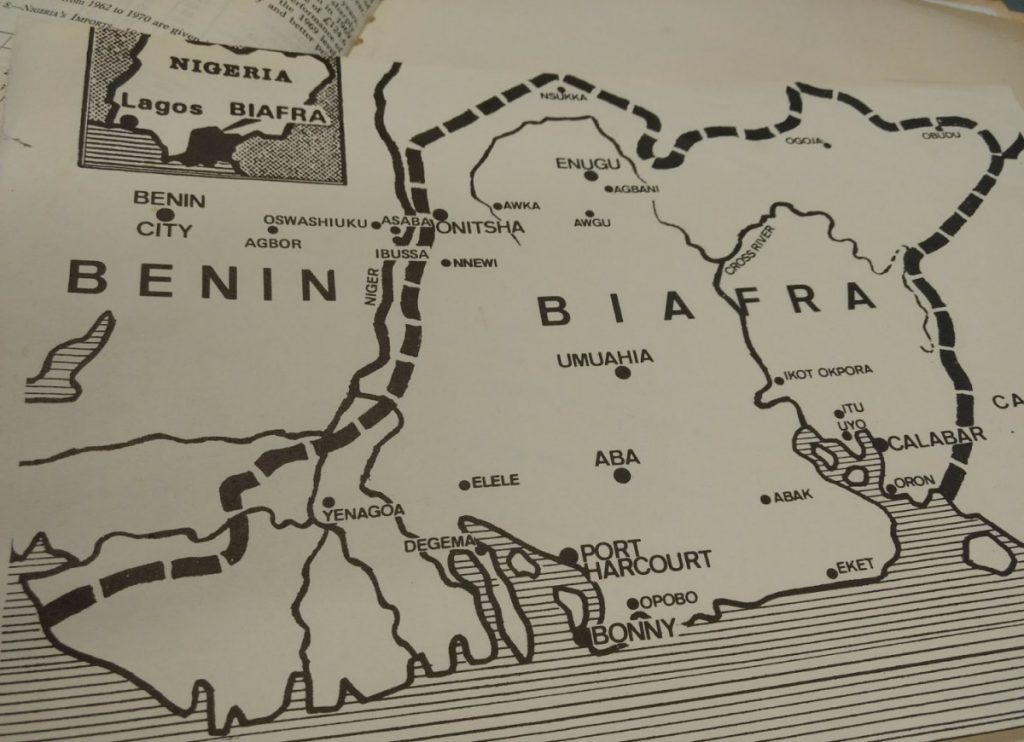 platform that he used to get the vantage position from which he highlights the social, political, economic, humanitarian, and military catastrophe that was the Biafran secession war. The John Stremlau Research Files at the Rose Library takes one down memory lane into the people, the egos, the ethos, and the suffering that scourged global conscience, leaving an indelible scar. It also relates the war to international politics, the cold war, the Christian Church, and the politics of humanitarian action. 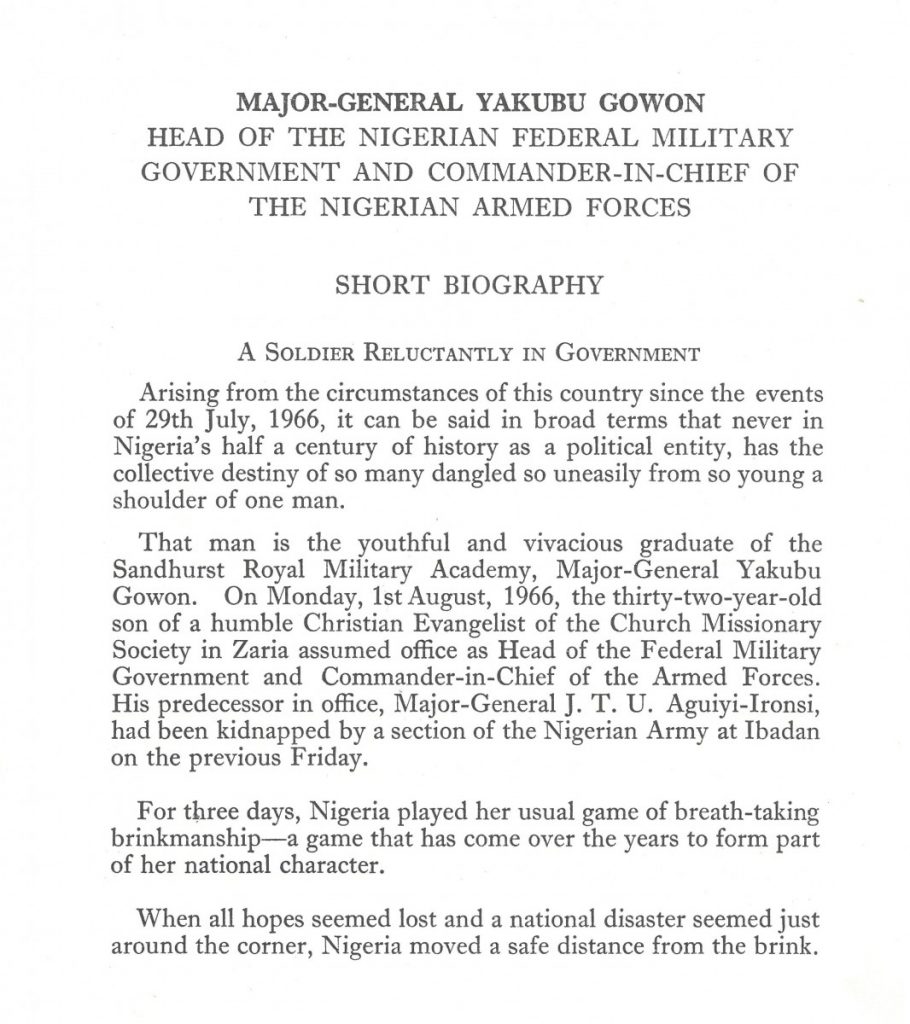 Through personal and private communications between Stremlau and the two gentlemen, we get to know the reasons for the actions they took. We get to know the background that shaped their ideology and commitment to duty. We get to know that while Major-General Yakubu Gowon was only a military man, his ability to consult and to take advice; made him a formidable match to Lt. Col. Odemegwu Ojukwu’s Oxford education, bullish determination, and penchant for drama. 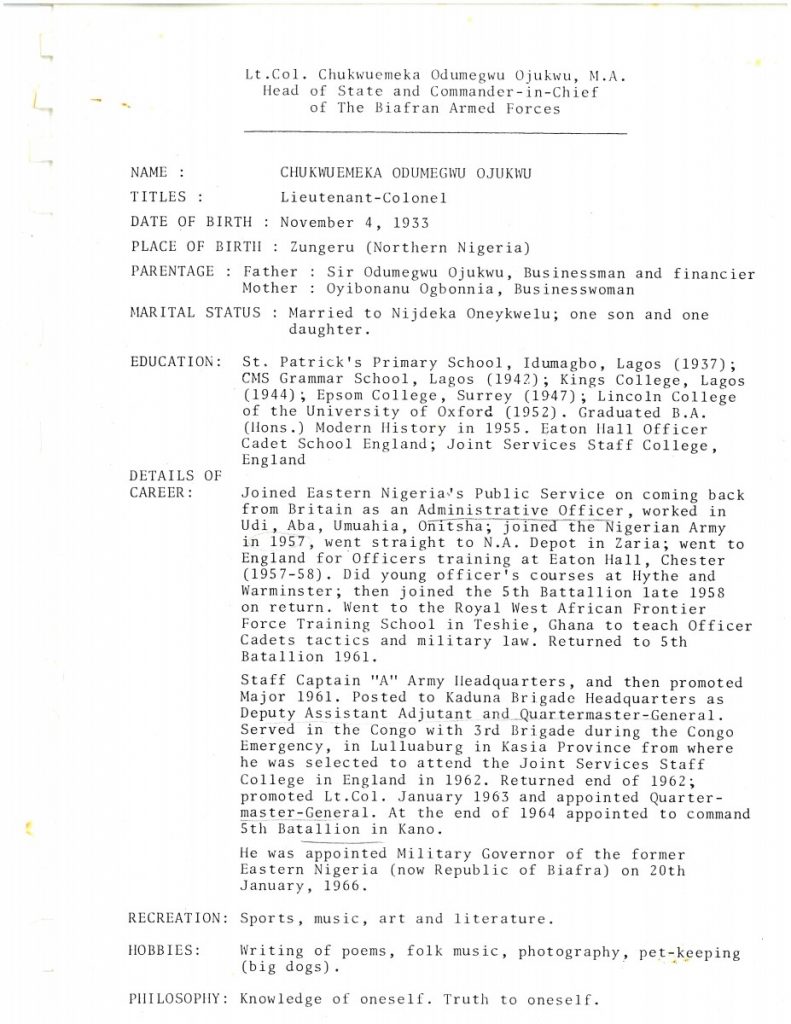 “In war, truth is the first casualty”, Aeschylus once said. Stremlau does an excellent job providing the different instruments of propaganda that the two sides used. The files include an innumerable collection of the newspapers, radio broadcasts, reports, diplomatic papers that sought to win the war from that front. Biafra’s efforts were more aggressive succeeding in initially getting world sympathy. Gabon, Haiti, Ivory Coast, Tanzania, and Zambia went even further to recognize Biafra as a state. Stremlau’s collection has some of the copies of the official declaration of recognition. Tanzania’s document is particularly forceful in arguing for Biafra’s right to self-determination. There are numerous reports of atrocities supposedly committed by both sides. These reports were often prepared by each side against the other.

The biggest humanitarian crisis of the war – starvation in Biafra – also falls to the propaganda war. While Biafra worked hard to highlight the extent of the crisis and that Nigeria Federal Forces had caused it, the Nigerian Federal Military government, played it down insisting that it was Nigeria’s internal issue that they could manage. The collection flashes out issues surrounding the imposition of no-fly zone over Biafra, the ICRC relief flights. The gunning down of an ICRC relief flight, moved them organization to cease its flights escalating the already deplorable situation. 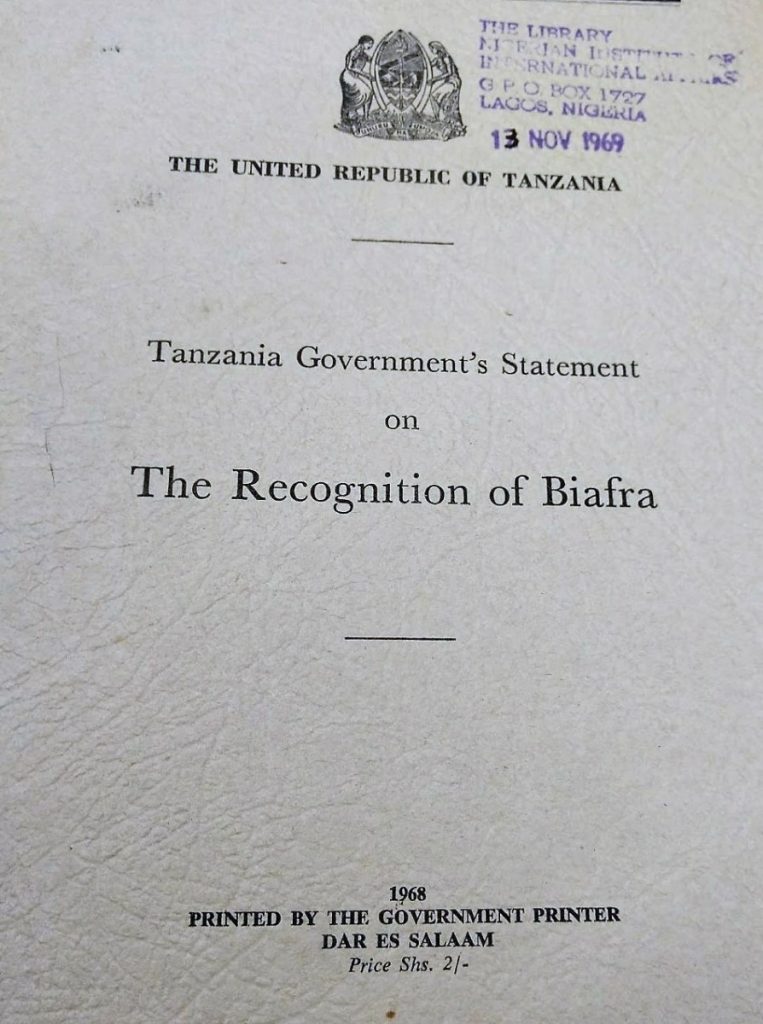 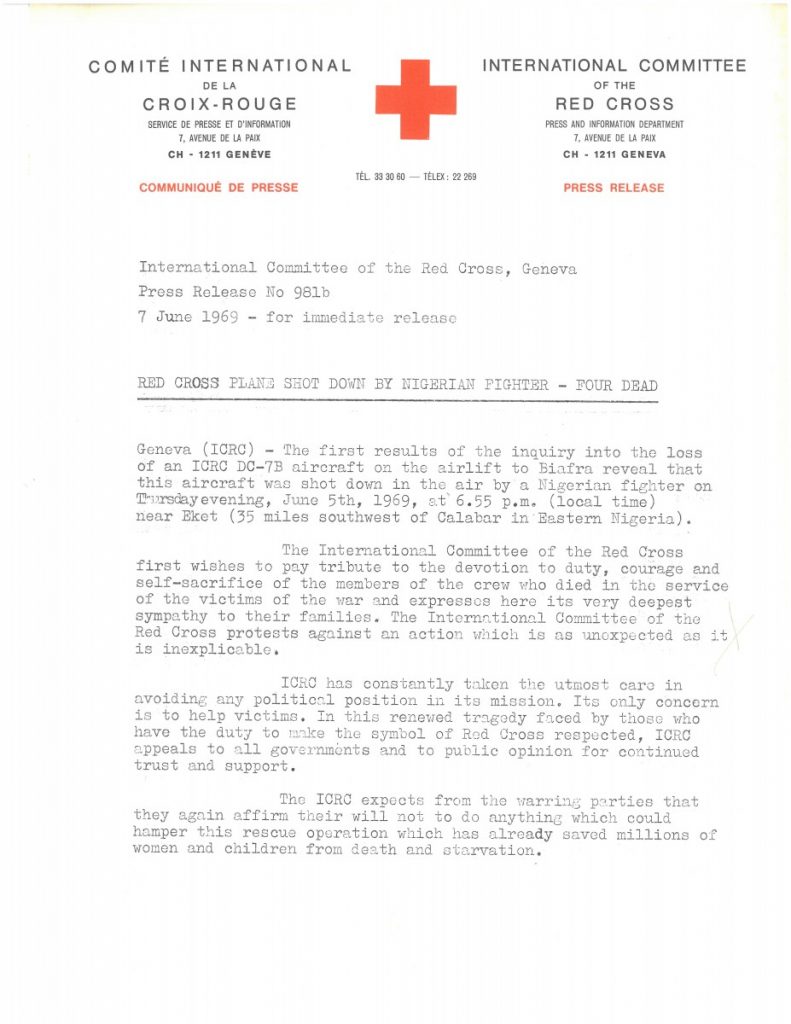 The ICRC press release reporting the shooting down of it relief plane on 06/05/69.

The war came with many personal sacrifices. The collection has evidence of these sacrifices as evidenced by the donation Sir Louis Mbanefo displayed below. Similarly, at the height of war, life had to continue as well. True to the culture of the Ibos, a wedding ceremony stands out for its opulence, while also individual sacrifices show how much even the elite members of the Ibo community believed in the justness of their cause and contributed towards it. 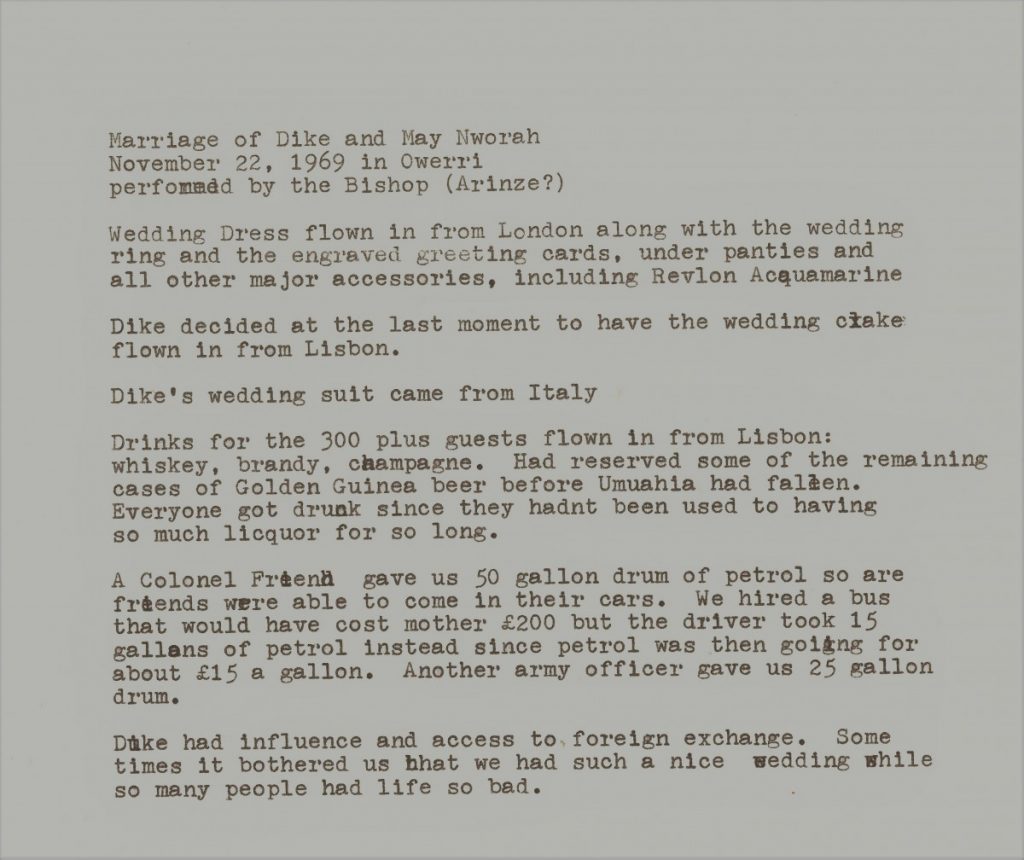 An Ibo wedding, Dr. Dike Nworah’s, even war could not stop the typical opulence 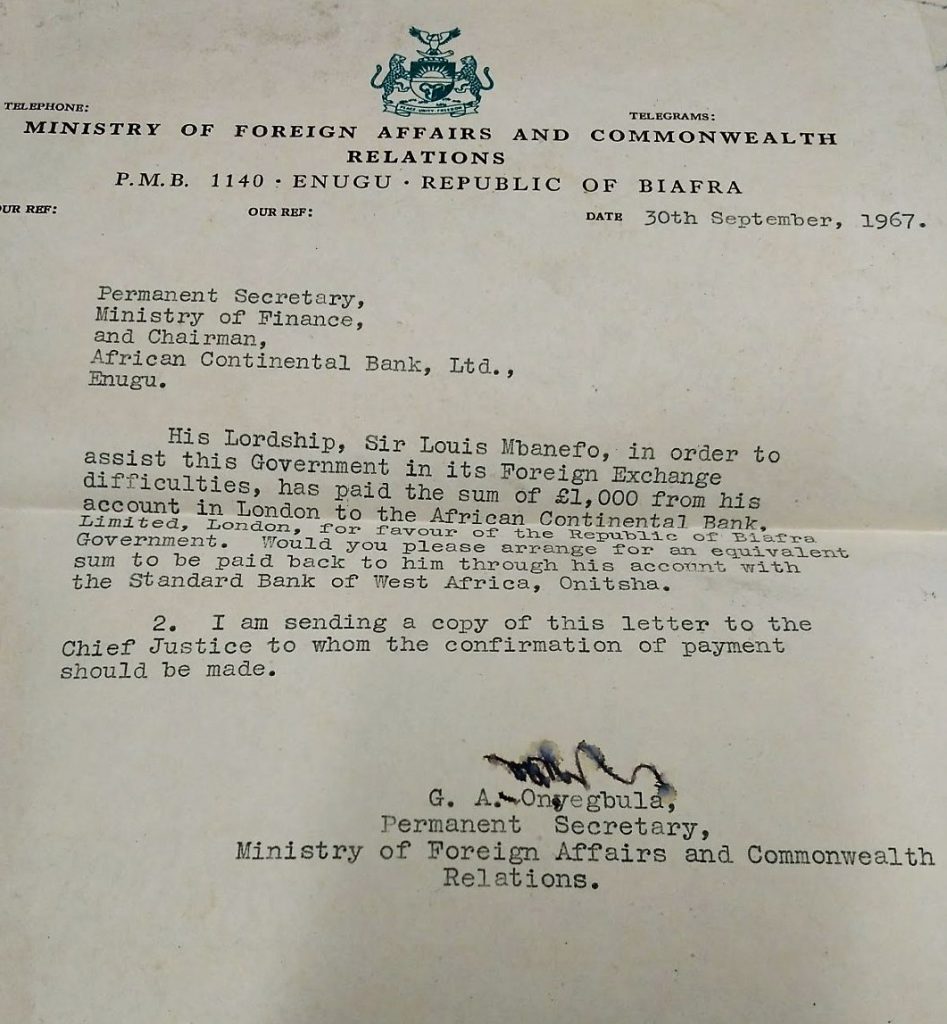 Bank instructions on the donation by Sir Louis Mbanefo to the Biafra government.

The collection also teases the happenings of January 12th, 1970 when the dream of Biafra died when they declared cessation of hostilities. It also follows the two major actors Lt. Col. Odemegwu Ojukwu, exiled to Ivory Coast, and Major-General Yakubu Gowon eventually deposed by a bloodless coup and exiled to the United Kingdom. In the end Ojukwu and Stremlau develop remarkably close friendship that continues throughout their lifetime. 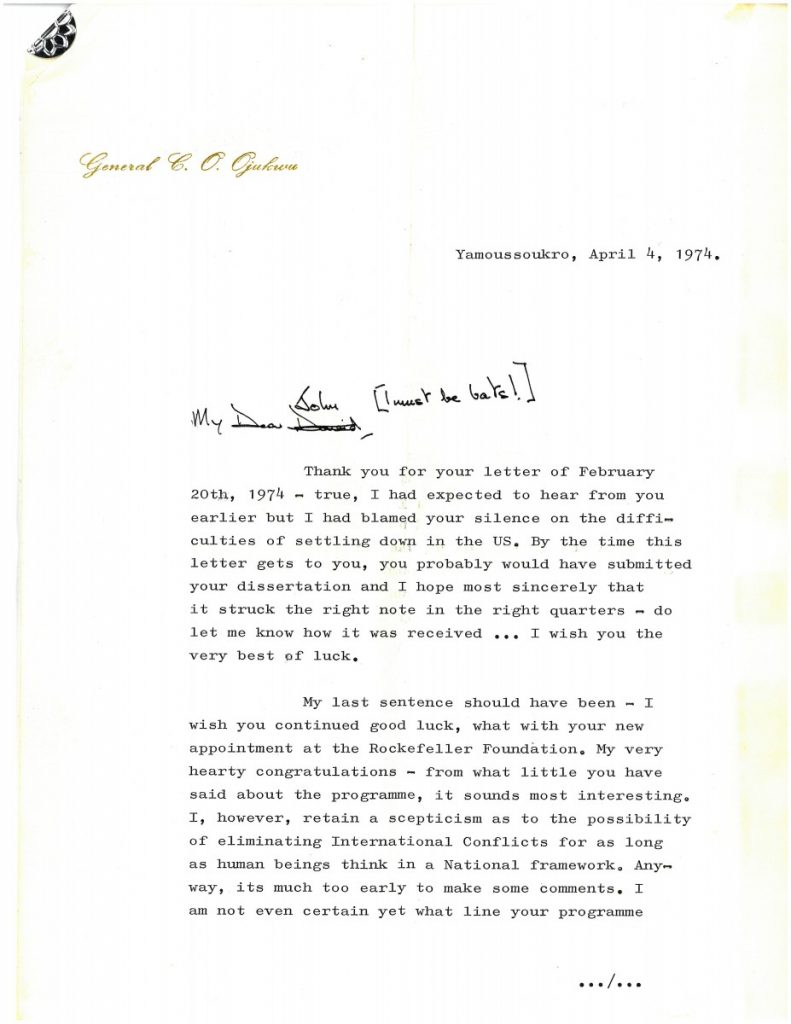 Letter by Lt. Col. Ojukwu to John Stremlau five years after the war.

The collection also gives excellent insight into the involvement of world powers in the war. The rivalry between England and France demonstrated by England’s covert support of the Gowon, while France supplied Ojukwu’s forces with weapons. Russia pouring financial and technical support to Ojukwu, while the United States publicly communicating neutrality, while secretly supporting Gowon. Finally, one also can decipher the war of religions. Since Gowon is from the North, the Catholic Church (and to a small degree, the World Council of Churches) for a long time interpreted war as aggression of largely Muslim North against the largely Christian Biafra. However, this misconception cleared up and the support for the Biafra subsided.

Interested in seeing more of this ‘half of a yellow sun’, unpublished, you have every reason to visit the  John J. Stremlau collection at Rose Library.