Not long ago, I arrived in the archive, on my second cup of coffee, and proceeded—from the Latin cedere, both “to go” and “to yield,” modified by pro, “forward”—downstairs, to finish processing (of the same origin) the Rose’s collection of The American Music Show. Now that this process—processing—is finished, I’ll briefly say something about it.

To pick up a thread from my last post, I want to stress a certain self-effacement that seems to be necessary in archival work, which distinguishes it somewhat from my experience as a scholar, placed under constant pressure of publishing or perishing, of making active interventions into bodies of work. That said, one shouldn’t make too much of a distinction between the ideas of “active” and “passive,” which are assuredly far more interdependent and tangled up in one another (more versatile, if you will) than their opposition would at first suggest. Nevertheless, one could say that, in contrast to a researcher’s active interventionism, and as the vanishing mediator that makes it possible in the first place, it is an archivist’s job to become passive in the face of a series of texts. And this passivity might begin somewhere in the process of “processing”—somewhere between its “going forward” and “yielding.”

What is processing? Wikipedia defines archival processing as “the act of arranging and describing the papers of an individual or family or the records of an organization,” (or, in my case, VHS tapes). If a collection arrives at an archive in a particular order, then this order is often maintained so as to maintain the collection’s original integrity, according to a principle sometimes called respect du fonds. But if this isn’t possible, in the case of paper materials, processing often will often take place at either the “series” or “folder” level, where materials are grouped together according to criteria like the dates during which they were published, their genres, or the people that they relate to. If this happens, an order has been “imposed” on a collection. Now, when I first learned about processing, I thought that this word, “impose,” was overly assertive or even almost strangely violent—and even more so after I realized that “impose” is actually a common term in archival work: archives “impose” “control” over their collections, and then, in processing them, they might “impose” an order upon their materials. Yet there is perhaps another reason, I now think, for this strange language. To me, the severity of the word “impose” also implies the recognition of a violence inherent in the arrangement of materials according to an order that is external to them. Rather than sugarcoating the process—saying that one “gives” or “creates” an order for a collection, for instance—this word admits that order is always imposition, that it fundamentally alters and always potentially harms the integrity of a collection. Imposing an order is therefore a task and responsibility that must be approached respectfully and cautiously. The implications of this imposition to me underscore just how difficult it can be to remain passive vis-à-vis archival material. Total passivity, after all, would be only an ideal. Ideally, order would arise organically from the material, with the archivist ceding themself to it as much as possible, thus yielding (cedere) to it in order to move forward (pro): pro-cedere. But things aren’t always so easy, and the process is also always something of an imposition. 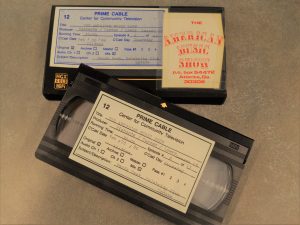 The American Music Show collection was processed at the “item” level, and I thus didn’t re-order it. Instead, I found myself rummaging through nineteen large boxes of tapes and gathering information from them, to be used to identify and describe each one, or each “item.” And yet each of these “items” by itself contains its own story and identity that has to be parsed out. Over the course of a month or so, I put together a new draft of the collection’s online finding aid, including information like each episode’s air date(s), segment titles, writing found on and inside of the VHS sleeves, and so on. Each of the tapes presented a sort of interpretive puzzle, often containing more than one episode, for instance, or presenting conflicting information. I then had to decipher this raw information to organize it in the finding aid for future researchers to access. After having done so, I’ve had to account for the interpretive decisions that I made, in the collection’s “processing note,” for the sake of identifying exactly what I imposed on this collection. This process is a little painstaking, but important. Our next step will be digitizing all of the collection’s 700+ VHS recordings.

There was one instance during processing in which I imposed a completely new order: I re-foldered one box of “memorabilia” from the show, which included correspondence, memoranda, fan mail, episode lists, newspaper clippings, and art. Some of the art in this box is amazing: colorful pencil and marker drawings, construction paper collages, mixed media, even a drawing of a crown that reminds me quite a lot of Jean-Michel Basquiat. And, like Basquiat, this outsider art mixes the serious with the playful in ways that I really appreciate. I might write about this art for my next post. In any case, the new finding aid should be updated online soon. Once it’s up, I encourage anyone to take a look through the breadth of this collection, and to read some of the The American Music Show’s many absurd episode titles, and to imagine what they might describe.