Mikela Razo is a graduate student in the Department of Anthropology at Georgia State University. Over the Spring 2019 semester she completed an internship with the Rose Library Rare Books unit. 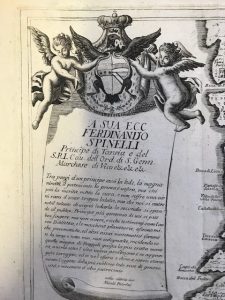 The cartouche in the upper left hand corner of the map shows the dedication to Ferdinando Spinelli, Prince of Tarsia. The printed signature at the bottom is the printer, Nicolo Petrini.

The “Map of Pozzuoli according to the present state” (“Mappa di Pozzuoli secondo lo stato presente”) is graphically engraved to illustrate the Pozzuoli region, located on the Phlegrean Peninsula on the outskirts of Naples. The map was printed in 1750 by the Petrini father-son business. Paolo Petrini (the father of the duo) worked in Naples between 1692 and 1748 and was succeeded by his son Nicolo Petrini.

The map itself is cotton laid paper with a watermark in the shape of a double circle and an indistinguishable design in the center. A cartouche in the upper left-hand corner dedicates the map to the Prince of Tarsia in the design of a scroll and a coat of arms at the top (most likely the Prince’s). The holes along the left side reveal that the map was once bound as a part of a book.

At first glance, the Map of Pozzuoli seems like an ordinary component in Italy’s historical cartography. However, a closer examination reveals the complex network of relations in 18th century Italy between royal governing bodies, the factions that supported them, and the craft of paper-making.

Nicolo Petrini dedicated this map to Ferdinando Vincenzo Spinelli (1691-1753), Prince of Tarsia – patriarch of one Naples’ wealthiest and most powerful families. Ferdinando was the founder of the Palazzo Tarsia – a museum and library. It opened to the public in 1747 and became one of the most attractive Neapolitan destinations for educated travelers and “Grand Tourists”.

It is no coincidence that the Palazzo was commissioned in 1735. Palazzo Tarsia was an architectural celebration of the prince’s position in Neapolitan society, of his cultural and political ambitions, and of his support of the new king Charles of House Bourbon. Charles was born in January of 1716 to the reigning King of Spain (Phillip V) and was third in line for the throne. He was crowned king of Naples and Sicily in 1734, as Charles VII and Charles V respectively. Charles lived in Naples for 19 years alongside his wife Princess Maria Amalia of Saxony and their eight (of thirteen) surviving children. Charles was crowned King of Spain in 1759, as Charles III, and reigned until his death in 1788 when he was succeeded by his second son, Charles IV. 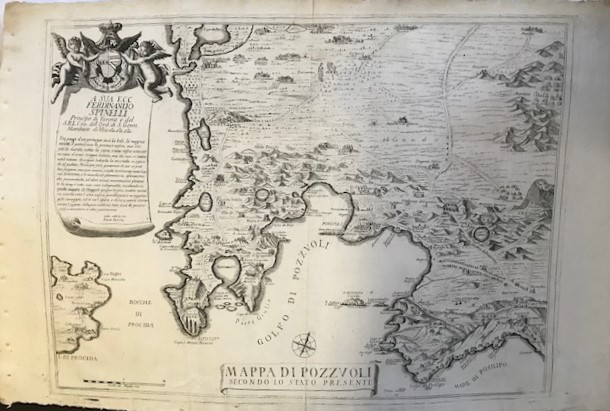 Notice the holes on the left hand side, which indicate that this map was originally bound with other materials.

Until Charles VII’s conquest of and subsequent occupancy in Naples, the city had been a province under viceroy rule. Charles’s decision to settle in Naples had aroused great hopes of a cultural rebirth amongst local nobility. His arrival and the cultural revival that ensued, marked a significant change in the city’s life. When Charles VII became the King of Naples, he established the Reale Ordine di San Gennaro (Order of Saint Januarius). It is one of the last great dynastic orders to be constituted as a chivalric fraternity with a direct attachment to the dynasty rather than the state. Knighthood was granted to a number of select elite from the local aristocrats who were particularly faithful to the monarchy. Membership awarded them various religious and civil privileges otherwise unavailable. Spinelli was one of the first to be inducted in 1738. The fact that he was offered such an opportunity is a testament to the success of his political efforts and his level of support for Charles VII.

The Palazzo Tarsia was a component of this cultural revival brought on by Charles VII’s arrival in Naples. It was designed to be a space of learning and displays that defied traditional classifications – it was more than a museum and a library and yet was neither. It was the property of one person, but open to the public. Although not defined as one, the spatial dispositions of the collection were similar to other cabinets of curiosities (Wunderkammer) and included instruments, artwork, books, and manuscripts. The heterogeneous collection reminded contemporaries of the Medici collections in Florence as the princely collections of the 16th and 17th centuries. The Palazzo’s space served in a similar manner to the contemporary scientific academies in Paris, London, and other European capitals. On one hand, it was regarded as a house built for the advancement of knowledge and on the other, it was an outdated ostentation of luxury.

Engravings and the Printing Press

The paper mill in Amalfi, southeast of Naples, was the largest paper contributor to the publishing business within the bustling Neapolitan city. The Amalfi paper mills produced a special paper called “Carta Bambagina” which cost less than animal skin parchment and became popular in legal and commercial circles. Frederic II’s decree in 1231 forbade the people of Amalfi from using their paper to write their official documents. The decree ‘suggestold’ them to keep using parchment which could be better preserved. Despite this, the paper product continued to be used and gained significant popularity in the following centuries.

The Bambagina paper was made from rags that were cut up and placed in stone tubs where they were then pounded into fibers using water-powered wooden mallets or pestles. The pulp was then placed in a vat and spread evenly across a thin wire mesh. The water was then drained off and the pulp was put between two pads and pressed to eliminate any excess water. The pulp, now considered a sheet, was then hung to dry. 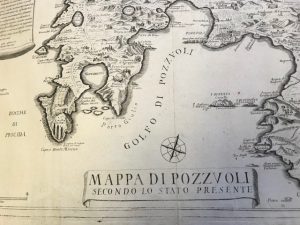 This banner on the lower part of the map shows the title banner and the Gulf of Pozzvoli, near Naples.

As its popularity increased in the 15th century, many foreign authors published their works in Naples using Amalfi’s precious paper – the first print occurring in 1470 by Publius Terentius Afer. Bambagina was also used in all the royal curiae for public acts of the Angevins (12th century) to that of the Bourbons. Production in Amalfi reached its height in the 18th century when the town was noted to have had 14 paper-mills. The paper-makers had their own corporation with a congregation that met in the Church of the Santo Spirito (present day Piazza Santo Spirito). The paper mills in Amalfi began a steady decline in the early 19th century and there now exists only one.

Alongside the trade of paper-making emerged the craft of line engraving. Line engraving came about during the 15th century and was developed to a very high degree by Italian schools into the 16th century. The engraver would use a specialized tool to push across the surface of the plate away from the artist. This produces thin strips of waste metal and left thin furrows in the metal plate’s surface, to take the ink. The engraver would have to reverse (left to right) the image or page they were working on.

Up until 1820, the metal plates used for printing were made of copper, a soft metal. Copper plates were easier to engrave and allowed artists more freedom in the effects that could be produced. This also made it possible for an artist to make alteration to plates – like when maps were updated. The plate could be heated and beaten flat in the area that needed to be changed, it

would then be polished smooth and re-engraved. A copper plate could be employed several hundred times to produce a print. At this point in time, the image quality would have deteriorated due to wear of the soft metal. The plate would then need to be reworked by the engraver to improve the quality. Which means these plates could continually reused and revamped.

The Map of Pozzuoli

As previously stated, the “Map of Pozzuoli according to the present state” was created in 1750 by Nicolo Petrini. The map is engraved on cotton laid paper illustrated to display the town of Pozzuoli in relative detail. The paper itself can tell us much about local connections. Although it is conjecture, the fact that the map was printed in Naples by Petrini implies that the paper was sourced from one of the many paper-mills in Amalfi. Further research on the indistinguishable watermark might be able to solidify this hypothesis.

The cartouche engraved in the upper left-hand corner shows the map was dedicated to Ferdinando Spinelli, Prince of Tarsia, by Petrini. Through further research, it is revealed that Spinelli had connections to the King of Naples, Charles VII, who goes on to become Charles III, the King of Spain. It can be surmised that the map was commissioned by Spinelli to be part of the collection in Palazzo Tarsia.

The “Map of Pozzuoli” reveals three major things about 18th century Italy: (1) the dynamic relationships within contemporary Neapolitan society and the imperial families; (2) the complexity of paper-making and the spread of printing in the region, specifically in Amalfi and Naples; and (3) the intricate connections between people, places, and things caused by the trade of printing, paper-making, and the display and use of knowledge.