Rachel Brazeale completed an internship with the Rose Library during the Summer of 2019. Rachel recently completed a Masters in Archival Studies from Clayton State University.

During my internship with the Rose Library, I have been working on Emory’s upcoming exhibition on the life of Lawrence Wood “Chip” Robert, Jr. Learning about Chip has been a window into the 20th century South. 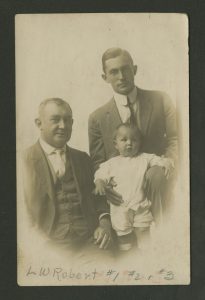 Born 1887, Chip began his journey to industrialism working with his father – “Captain” Lawrence Robert Sr. – building railroads. He began his studies at Georgia Tech at 16 years old, where he earned a Civil Engineering degree and an Electrical Engineering degree. Chip founded Robert and Company Architects and Engineers, which played a vital role giving young engineers work experience through Georgia Tech’s Co-Op program. Chip fought hard for equalized freight rates between the North and South, and brought manufacturing opportunities to Southern states through his “Red Carpet Tour,” which advertised the Southern climate and resources to owners of Northern factories. As a lifelong Democrat, Chip worked closely with President Franklin Delano Roosevelt as Assistant Secretary of the Treasury. In that role, he was responsible for the United States Mint and all public buildings, and played a major role in the post-World War II assessment of the world condition as the United States envoy and special delegate.

I began preparing for the Chip Robert exhibition by reading Susan S. Robert’s account of his life, The Man Who Loved Georgia Tech. Robert’s biography highlights the major periods in Chip’s life and paints a picture of his character. From my notes, I proceeded to peruse the Lawrence Wood Robert, Jr. papers in Emory’s Stuart A. Rose Manuscript, Archives, and Rare Book Library, and located materials that connected to the major areas of Chip’s life. From item and location notes, along with thumbnail images of the potential items, I created an Excel exhibition item list. Once I had my list, I performed additional research until I landed on a theme that encapsulated Chip Robert’s life experience: “Life as Art.” Chip’s life was a constant seamless work narrating the intrinsic need to create – creating industry, creating foundation, and creating relationships. From this theme, I created exhibition text to use in the overall narrative. 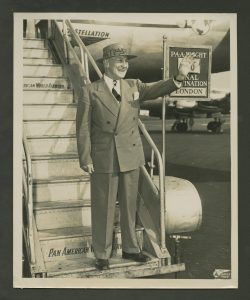 I sent the images I’d selected for digitization to have high quality scans made and pulled artifacts and documents for preservation review. A preservation review is required for all materials that may go in an exhibition in order to determine if the material can be displayed in its original form without harm to the object.

Working with the Chip Robert exhibit has been a huge learning experience for me as I’ve gotten a feel for the in-depth nature of exhibit and event planning. It is a team effort that requires creativity and organization, and, like art, it is a process best appreciated when everything finally comes together.

The Chip Robert exhibit will open in September 2019 in the Rose Library, located on the tenth floor of the Robert W. Woodruff Library. Susan S. Robert’s book can be purchased at the Rose Library.