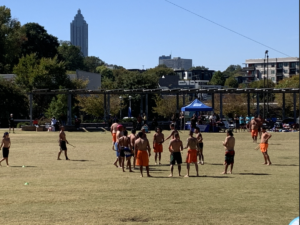 The Southeast Woodlands Stickball Summit Exhibition Game took place on October 15th at the Historic Fourth Ward Activities field along the Atlanta Beltline. Related to the modern game of lacrosse, Native American stickball (toli) is one of the oldest sports in North America.

The October 15 Stickball Summit brought together Cherokee, Choctaw, Chickasaw, and Muscogee communities to play their traditional sport on Muscogee land for the first time in two centuries. The first game played was the Chickasaw version of stickball. The object of the game was to hit a fish on the top of a pole in the center of the field. It is a social game: players were broken into men and women teams of which anyone could join to play. Teams encircled a 15-foot pole to throw the ball up to turn the fish. Second was the Choctaw version.  In this variation, each team has a goalie to defend their side’s pole and the offense players attempt to hit the top of the 10-foot pole of the other team. Players threw the ball over longer distances to cross the field while others centered around their pole to protect it. The last game played followed Cherokee rules. Their version was in set teams of nine and the first team to twelve points (passing the goal line) won. This game consisted only of men, and they play barefoot wearing only athletic shorts so their full body is connected to the earth. Wrestling is important in this version as this was the most tactile form to release aggression built over disputes. At the end of the game, all players purified themselves with water to wash away their dispute and resume peace.

Later the same day, the Carlos Museum at Emory University hosted a panel discussion. It began with a documentary of women reclaiming stickball within the Cherokee community. Afterwards, a youth delegation from the Boys and Girls Club of the Mississippi Band of Choctaws performed the Snake Dance in full regalia. This led into the discussion led by Dr. Natalie M. Welch, Ph.D. (Eastern Band of Cherokee Indians), Addison Karl (Chickasaw/Choctaw), Casey Bigpond (Mississippi Band of Choctaw), Ace Greenwood (Chickasaw/Cherokee), Tosh Welch (Eastern Band of Cherokee Indians), and Dr. Monte Randall (Muscogee Nation). They spoke of their connection to stickball and how impactful it was to play with each other in brotherhood. It ended with wisdom and strengths each panelist gained through stickball and how they pass it onward to future generations.

Atlanta Beltline sponsored the 2022 Stickball Exhibition with the Native American and Indigenous Studies Initiative and the Carlos Museum. 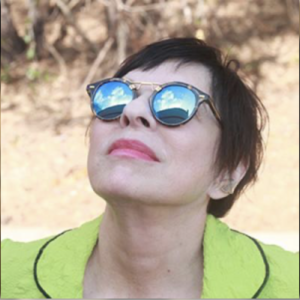 How do we learn? Who do we learn from? How do we carry their lessons? These are some of the thought-provoking questions Dr. LeAnne Howe asked the group of faculty, graduate students, and undergraduates gathered for her recent talk at Emory, “Embodied Tribalography in Fictional Characters and in Native History” on October 12. Dr. Howe is an enrolled member of the Choctaw Nation and the Eidson Distinguished Professor at the University of Georgia.

Dr. Howe’s talk began with an acknowledgment of Emory’s occupation of Muscogee land and  reaffirmed Emory’s commitment to build relations with the original caretakers of this land.   She then read selections from her new novel, 1918 Union Valley Road. Weaving evocative imagery of their family’s farm in Ada, Oklahoma, Dr. Howe recounts her grandmother’s stories life, love, and the lessons the birds taught her during the 1918 flu pandemic. Through a dramatic reading of the text, Howe connected directly with her grandmother’s anguish on the night her first husband succumbed to the deadly influenza.

Afterward, Dr. Howe spoke about embedded historical and spiritual knowledge in Choctaw games, particularly “base and ball.” She narrated a traditional Choctaw story about a dispute between the animals and the birds at the Nanih Waiya Mound. In this origins story, the central themes of hospitality, sportsmanship, and consensus formed the basis of Choctaw cultural identity.  At the pivotal point in the story, the birds were short a player. Eagle granted squirrel wings, and the flying squirrel played for his adopted team with as much dedication as his own. This story is embodied in the position of the Fani Mingo/Miko (squirrel chief) within traditional tribal governance, as this office served as an advocate for other communities outside the Choctaw Nation. In this way, sportsmanship ensured all views had representation in council discussions.  These values enabled the Choctaws to persist through the traumas of colonization and removal. Dr. Howe concluded by noting how these embodied stories enable resurgence and return of Indigenous peoples to their homelands through these ancient yet enduring ball games.

Dr. Howe’s talk kicked off the Native American and Indigenous Studies Initiative’s week celebrating Indigenous sports and was made possible through the generous co-sponsorship of the Hightower Fund, the Department of English, the Program in Creative Writing, and the Department of History.

On Thursday November 17, Sharon Lenzy and Rhonda Grayson will host a presentation on Creek Freedmen Band of Oklahoma’s history and work. The Creek Freedmen Band is a group of former Muscogee Creek citizens who had their tribal citizenship taken away in 1979,and are advocating to have it restored. They are descendants of Creek and enslaved peoples and have a long history in the Creek Nation. This event is sponsored by the Weelaunee Coalition.

On October 13th, the Emory Wheel published an article featuring the Native American and Indigenous Studies Initiative, and student advocacy at the Emory University for presence, resources, and representation. To read the full article, click here.

The James Weldon Johnson Institute for the Study of Race and Difference is hosting a Colloquium Series during the fall of 2022. Join Dr. Harjo, an Associate Professor of Native American Studies at the University of Oklahoma, in discussing Mvskoke theories of knowledge and Indigenous feminisms to examine the Mvskoke community’s understanding of the future. This event is open to attend, but registering in advised.

The Native American and Indigenous Studies Initiative, the Hightower Fund, the Department of English, the Department of History, and the Creative Writing Program have co-sponsored the Embodied Tribalography in Fictional Characters and in Native History to kick-off a week of celebrating Native American sports in the southeast. Dr. Howe (Choctaw), Eidson Distinguished Professor in American Literature at the University of Georgia, connects Native American past and present through investigating Native Americans’ relationship with their homelands and the ways they embody it through traditional games. The Coffee and Greetings and the event are open attendance; RSVP for the student luncheon.

To learn more about Dr. LeAnne Howe, link is here.

Embodied Tribalography in Fictional Characters and in Native History

On Oct 4, the Rose and Woodruff Libraries acquired more than 100,000 pages of North Native American primary sources. The North American Indian Thought and Culture project consolidated sources on People, Places, Historical Events, and much more. This is one of many new collections now offered by the Rose and Woodruff Libraries. Learn more about the new digital collection here.

Segment of the article:

Earles’ work as an ambassador of his cultural identity is valuable and necessary, especially as Caddo pottery was almost lost to time when a matriarch of the tribe and the last Caddo potter stopped making Caddo pottery in 1908. Knowledge of this rich artistic history began to disappear as the Caddo tribe was undermined and impeded by colonial powers and conquistador diseases. Earles has used some of his pottery to make a critical commentary on the restriction of said cultural Indigenous knowledge. 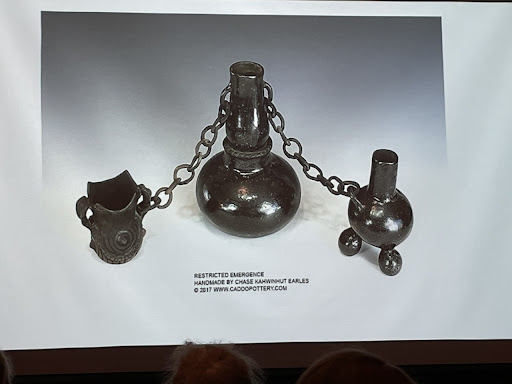 In order to understand and celebrate Caddo Indigenous knowledge, Earles’ lecture focused on the history of this pottery, the Caddo people as a whole and his own evolution as an artist.

Understanding the role and processes of pottery in the Caddo tribe is and was a large part of Earles’ own constructing process, as he had to learn these ways before he could faithfully produce pottery himself. While he was trained in drawing and painting at Savannah College of Art and Design, he worked with archeologists and Caddo tribe members to rediscover the detailed art of Caddo pottery. Earles digs and dries out his own clay, hand builds the pots without a wheel and then fires them in open wood fires. As somebody who tried to hand mold clay pottery in my technical art history course, I can attest that this process is insanely difficult.