The historic Supreme Court decision in the summer of 2020, when the court ruled that much of Eastern Oklahoma comes under the Major Crimes Act and still retains Native reservation status, relied heavily on the significance of the 1866 Treaty which grants Creek Freedmen full citizenship status in the Creek Nation. This panel will discuss the significance of the court’s ruling in relationship to Freedmen activists and community members seeking restoration of their tribal citizenship. 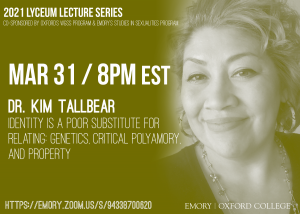 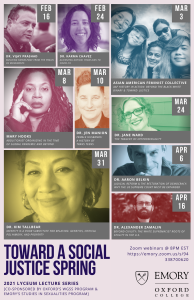 Dr. Cathleen Cahill (Penn State University)
March 4, 2021, 5pm, James Weldon Johnson Institute for the Study of Race and Difference
More Information
At the turn of the twentieth century Native American cultures, governments, and traditions were under sustained attack by federal policies that sought to destroy them. Policymakers drew a contrast between “modern Americans” and “primitive Indian,” ideas that were reinforced by the many images of Indians that proliferated in art, literature, and myriad other aspects of US culture. This presentation explores how three Native American suffrage activists–Marie Bottineau Baldwin (Turtle Mountain Chippewa), Laura Cornelius Kellog (Wisconsin Oneida), and Gertrude Bonnin also known as Zitkala-Ša (Yankton Dakota)–strategically used their writings and public appearances to change public opinion about Native communities and advocate for political rights and self-determination. 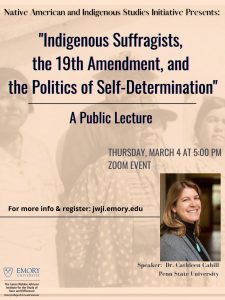