“I put my heart and soul into my work, and have lost my mind in the process.”  This quote, attributed to the painter Vincent van Gogh embodies both the beauty displayed in his paintings and the presumed mental illness he suffered during his life.  While the iconic swirls and visual auras of the former have fascinated museum-goers and art collectors alike, the enigmatic nature of the latter has also stupefied art historians and other curious academics

The subject of mental health is quite prevalent in my life.  Both of my parents are mental health professionals who have dealt with severely mentally ill patients, with conditions similar to that of van Gogh, and their passion for the human mind has inspired me to want to pursue a career in the field.  Thus, it was of great excitement to me when, one day, in class we discussed the apparent severe mental illness of Vincent van Gogh.  We were able to further immerse ourselves into his life when our class took a trip to the south of France and visited the town of Arles, where van Gogh’s infamous ear incident took place.  These experiences encouraged me to think about what illness actually ailed the iconic man.

While it is impossible to retroactively diagnose someone with a mental illness, it is a popular opinion among scholars that Vincent van Gogh suffered from manic depression, or bipolar disorder, as it is known today (Wolf, 2001).  Much of the evidence for this possible diagnosis comes via letters between Vincent van Gogh, his brother, Theo, and his sister, Wilhelmina (Blumner, 2002).  In a letter to his sister, Theo described Vincent as seeming, “as if he were two persons … with arguments on both sides” (Blumner, 2002).  Later, Vincent complained to his brother about his “heightened emotionality” and increasing reliance on alcohol to dull “the storm within” (Blumner, 2002).  Vincent also noted “horrible fits of anxiety” and attacks of “melancholy and atrocious remorse” which would be followed by “enthusiasm or madness or prophecy, like a Greek oracle on the tripod,” in letters to his brother (Blumner, 2002).  The mental turmoil that Vincent noted in his letters culminated in an acute psychotic episode in which he sliced off a section of his left ear lobe and presented the piece to a prostitute (Blumner, 2002).  During this episode, van Gogh experienced hallucinations and delusions, which required a multi-day stay in solitary confinement (Blumner, 2002). 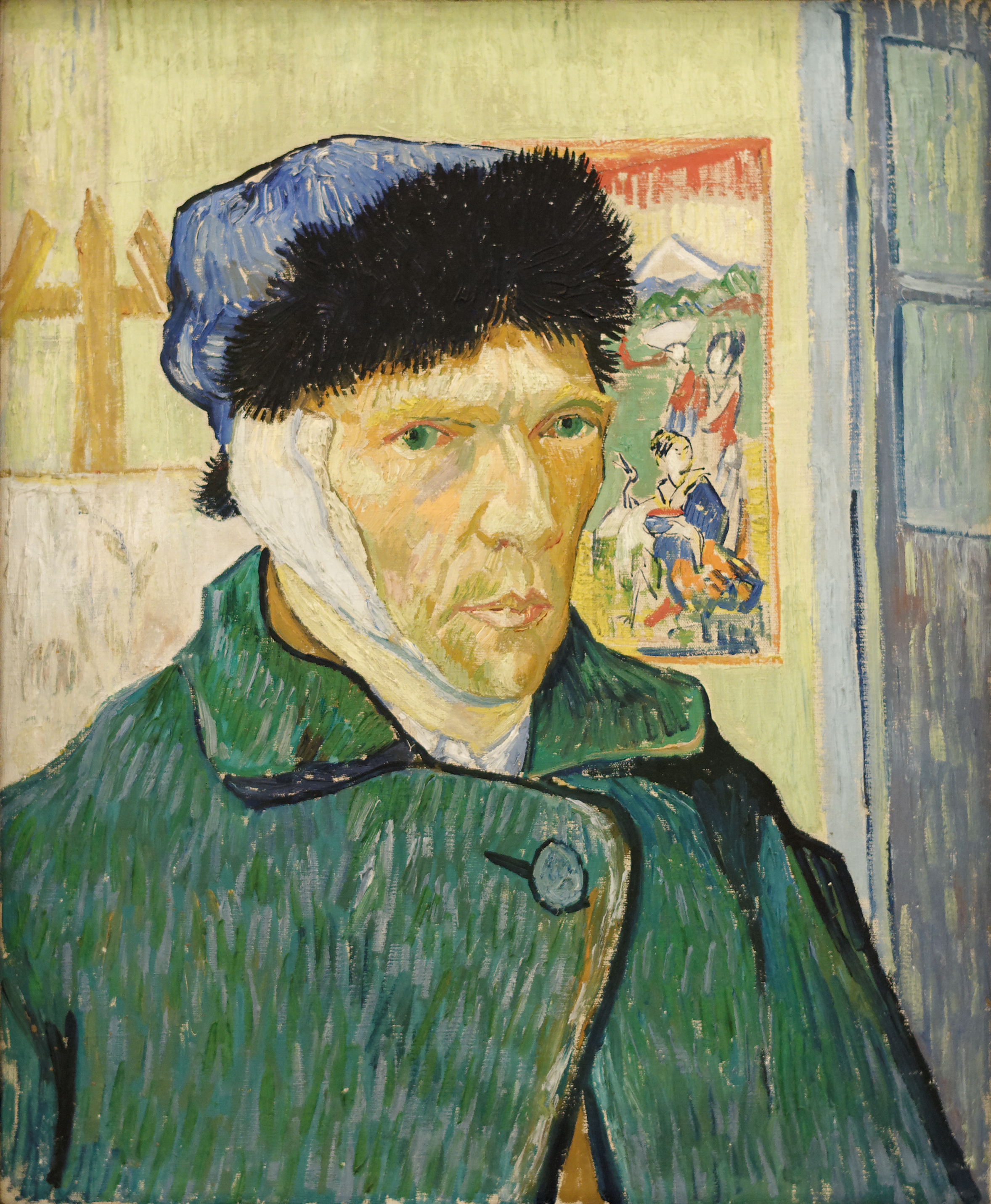 Self-Portrait with Bandaged Ear- Vincent van Gogh: This work by van Gogh was painted shortly after the severed part of his left ear during a psychotic episode

Both van Gogh’s description of his condition in notes to his brother and his subsequent psychotic episode are potentially indicative of bipolar disorder.  According to the National Institute of Mental Health bipolar disorder is characterized by “periods of unusually intense emotion” (NIMH).  These periods of emotion usually oscillate between manic episodes and depressive episodes.  Van Gogh’s description of periods of increased enthusiasm is consistent with mania, while his feelings of extreme melancholy are consistent with depression.  Additionally, bipolar patients often present with other illnesses such as anxiety disorder and substance abuse (NIMH).  Van Gogh experienced extreme levels of anxiety and he was a known to frequently have “a glass too much” of absinthe (Blumner, 2002).  Occasionally, patients experiencing severe bipolar disorder can exhibit psychotic symptoms, including hallucinations or delusions, as van Gogh did during the incident in which he severed his ear (NIMH).

Another key facet of bipolar disorder, as noted by the National Institute of Mental Health is its genetic risk factor (NIMH).  In class, we discussed the prevalence of mental illnesses, specifically schizophrenia, depression, and anxiety, in the van Gogh family.  There appears to be a strong presence of mental illness in the van Gogh family; however, there are no reported cases of bipolar disorder.  How then, could Vincent van Gogh appear to have suffered from a disease that no one else in his family had?

To me, it is a stark, yet beautiful, reality that such a creative and influential person as Vincent van Gogh potentially suffered from a disease a debilitating as bipolar disorder.  I think that my experience in both traveling to Arles and researching van Gogh’s mental health gave me a greater appreciation of the fact that people’s illnesses do not need to define them.  The human brain, in all its diversity, is capable of creating masterworks, even in the most unlikely of places.