We always see it in the movies: the younger child and the father laying together in the grass, gazing up at the midday sky. She asks what color the sky is, and he says blue without hesitation. Such a simple answer to what is, in reality, such a complex question. Over the past few weeks, to combat my occasional homesickness, I’ve found myself looking up to the sky, wondering if my parents can see the same sky back home in Georgia. When we discussed the colors of the sky in class, it encouraged me to investigate the simple answer to the question: what color is the sky?

Just one example of the types of colorful skies one could witness here in Paris.

The real answer, it turns out, depends on a variety of factors; the time of day, location of the viewer, location of the sun, the viewer’s visual abilities, language, mood, etc. From personal experience, I believe the same sky can be different colors to the same viewer in different states of mind. For example, individuals experiencing sadness have a greater tendency to “focus on the tree instead of the forest” (Gasper 2002), which translates to not seeing the full visual picture and instead fixating on visual detail, such as the shade of one item instead of the collective colors in a room. In a more scientific sense, a red-green colorblind viewer would have a different visual opinion of a sunset than a normally sighted individual. But what about language?

Interestingly enough, language and culture also exert a large influence on color perception; different languages have different words for different colors, and some only have one word for a whole category of colors. The color category perception effect (Zhang 2018) describes this phenomenon in which “people were more likely to distinguish colors from different colors than those that landed in the same area.” Those who speak languages that have more words for different colors would, under this theory, be better able to distinguish various shades than those who speak a language with fewer words for color. Based on this perception of color, two people from different cultures could view the sky in different shades. The figure below displays how the color wheels of the English and Greek lexicon differ due to variations in groupings. 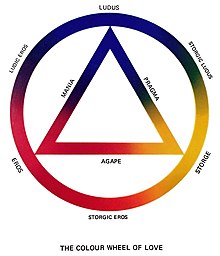 There is evidence that language centers in the brain are activated with color perception; in an experiment performed by Siok et al., when stimuli are observed from different linguistic categories, there is a greater activation of visual cortex areas 2/3 – the areas responsible for color vision. This enhanced V2/3 activity coincided with enhanced activity in the left posterior temporoparietal language region, which suggests a top-down control from the language center to modulate the visual cortex (Siok 2009). In other words, increased activity in language perception areas of the brain correlates to increased modulation of color vision before you’ve had the chance to pay conscious attention (Athanasopoulos 2010).

This is especially relevant in Paris; as an English-only speaker in a world of French speakers, I can’t help but wonder how differences in our color-related vocabulary translate to questions like that of the sky’s color. It is known that language effects sensory perception in its earliest stages (Athanasopoulos 2010), but would learning French color vocabulary change my perception of what colors I see? A previous experiment (Theirry 2009) demonstrated a difference in brain activity for both a native Greek and English speaker, the former of which makes a lexical distinction between light blue (ghalazio) and dark blue (ble). This is shown in the figure below, which demonstrates a greater Visual Mismatch Negativity response for the Greek participant when they were observing a blue stimulus due to greater lexical representation for this color.

A report of differences between speakers of different languages in early color perception. The shaded area represents presentation of a specific marker between 170 and 220 milliseconds post-stimulus. Notice the difference in negative response between Native English and Native Greek for the color blue.

In summary, the influence of language is one often underestimated when considering why we see the colors we do. I believe perception of color is a uniquely integrative experience, combining elements of culture, background, language, personality, and individuality to create specific visuals distinctive to one person. This seems all the more evident in Paris; everything is so new, so fresh and exciting that I cannot help but feel that the very colors of Paris hold something special that I have not seen elsewhere. So what color is the sky? You may be surprised, as I was, to find your answer constantly changes.

the sky is more than blue

“Why is the sky blue?” The question that children love to ask. Frankly, I want to know the answer too. Before tackling this question, we need to answer the question, “What color is the sky?” To me, the sky’s the limit (pun intended). Today on this beautiful and sunny day, the sky is blue, but when it is cloudy and gloomy, the sky is grey. At night the sky is black with the presence of stars that are spread throughout the galaxy. The sky can present itself as a spectrum of colors. During sunrise it is a refreshing mixture of yellow, orange, and blue. During sunset, the sky is a gorgeous blend of the rainbow from royal purples to warm, sultry reds. The colors of the sky can vary depending on your location on Earth. For example, during the northern lights, it is an array or colors that light up the sky. There are numerous answers to what the color of the sky actually is, but these are just examples of how I see the sky.

However, the perception of color is really at the core of this question. When we think about how we perceive the color of the sky, the answer to this simple question becomes quite complicated. There are many different ways that people see different ranges of color. This is quite special because these experiences and qualities allow for us to experience the world quite differently. People with “normal vision” will perceive the sky differently than others with something such as synesthesia.

Based on my thought process to answer this question, I really dove into different ways people with synesthesia are different in terms of how they perceive the world. Synesthesia is a phenomenon in which people experience unusual percepts elicited by the activation of a sensory modality that is unrelated or a cognitive process (Safran and Sanda, 2014). It is truly fascinating that people experience the world in such a distinct and unique way.

The literature provides great resources to better understand how people with synesthesia process many different stimuli in the world. In a study by Itoh et al. (2019), the experimenters performed a Stroop-like test in individual with synesthesia. The Stroop test is a neuropsychological test to test the ability to inhibit cognitive interference that happens when the processing of a specific feature of a stimulus disrupts the simultaneous processing of a different stimulus (Scarpina and Tagini, 2017).  For example, one must say the color of a word and not the actual word itself. When the color of the word and the word itself differ, this task seems to become increasingly difficult. The authors did this with people with synesthesia, except with an auditory stimulus because some people with synesthesia relate a color and sound together. This was done to test the automaticity of pitch class with relation to color. They did this by presenting pitch class names (e.g., do, re, and mi) in font colors that lined up with their color sensations. These results showed that people with synesthesia had decreased time in identifying font color when the color was incongruent with their associated pitch class names, concluding that pitch-class synesthesia is a genuine type of synesthesia (Itoh et al., 2019).

Synesthetes have been implicated to have a cross activation of visual areas that processes shape and color, supporting how visual stimuli lead to their unique perceptions of the world (Amsel et al., 2017). A review by Safran and Sanda (2014) took a look into how people with color synesthesia have varying associations in regards to perceptions, emotions, and consciousness. For example, synesthetes showed improved digit identification because each number is represented by a color, making a specific digit stand out. Some synesthetes experience their emotions and understanding through color, as shown in the review. An example that was shown was how a painting called “Vision” showed how the synesthetic painter drew out the visual experience of a needle puncture during an acupuncture session (Safran and Sanda, 2014).

To me, I would interpret it as a red splotch that could be blood. Clearly, my interpretation is far less poetic and meaningful when compared to the synesthete’s perception. Even within this review, the authors explored and reviewed many different ways that people with synesthesia navigate the world around them.

It is genuinely mind-blowing how the person on my right can interpret the world completely differently than the person on my left. I never would have imagined how a simple question like, “What color is the sky,” could be such an intriguing conversation starter.