In his article, The Medical Profession as a Moral Community, Edmund Pellegrino adds a slight twist to the health as a commodity vs. right debate by placing responsibility in the hands of the medical community. Previously in class we have discussed the role of the public and private sector in health care distribution; however, we have not yet delved into the moral weight it holds over physicians. Pellegrino argues that the medical community is likewise a moral community and as such must unite on ethical issues and serve as a voice for the patient, putting the primary responsibility of caring for the sick above all self-interests. I agree with Pellegrino’s argument and believe that in order to achieve better health among Americans, collective action by medical professionals is needed.

Physicians comprise a moral community: they have made a promise among themselves and society to do no harm, exist within a body that stands on its own regardless of specific membership, and are part of an entity that holds great power (Pellegrino). The oath of a physician promises beneficence and non-maleficence. This is a tall order. No physician alone is capable of protecting all of society, this “spectrum of obligations [belongs] to the whole moral community” (Pellegrino). Doctors have power over vulnerable patients, make decisions that have life-altering consequences, hold knowledge that is available to a privileged few, and are often the final say in a patient’s health (Pellegrino). Every decision made by a doctor is reflected upon the medical community, which is why, aside from the Hippocratic Oath, there are currently in place several regulations and standards upheld by physicians.

Concepts of health and illness have taken a dramatic shift over the last several decades and with them the responsibilities if the modern doctor. Not only is he/she to protect the ill, they are also to do their best to prevent illness and help to maintain health and wellness. Why is it then that much of patients’ money goes to administrative fees? Unnecessary tests? Most importantly, why are doctors refusing to see patients based on insurance type? Though doctors are professionals and provide a valuable service, net profit should not be at the front of their minds when vetting a patient. Instead of thinking about how much money they can make off of an individual, doctors should be primarily concerned with what they can do to help them. 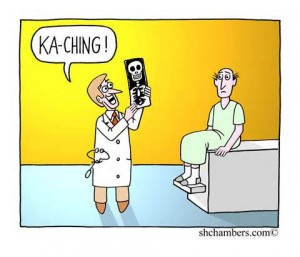 The American Medical Association (AMA) has often taken collective action on important issues. For years they had a huge hand in preventing universal health care reform, when really, it should have been the other way around. Instead of allowing self-interests, namely profits, influence their response to potential reform, physicians should have rallied along the idea of providing more care to individuals who can’t afford it. Patients do not exist under a large, resource-wealthy interest organization like doctors do within the AMA. Thus, regardless of socioeconomic status, patients are not as effective in making their opinions heard and enacted at the policy level. Only the medical community is capable of this.

Although I believe the medical community is responsible for raising expectations  in access to health care, I also understand that they are people that work hard with bills and material desires just like the rest of us. Medical school is incredibly timely and expensive. If the U.S. government were to adopt a system that paid for medical school, I think it would be more reasonable to force all practices to accept Medicare and Medicaid insurance schemes.

Individually, physicians may not have a lot of clout and influence over the government and areas of the private sector; however, if they use their collective power, medical doctors have a chance to truly fulfill the promises they made to protect the people.

The reading on “Libertarian Paternalism” takes a concept that has for years been seen in a negative light and gives it a positive spin (Thaler and Sunstein). When discussing the history of health care and public health in America especially, the concept of paternalism is typically thrown around in tones of disgust and shame. Authority figures in the realm of health aren’t qualified to decide what is best for us—only we are capable of making those decisions.

In our discussions surrounding informed consent and autonomy, we continuously mulled over whether or not health care professionals have the right to make decisions or even narrow down treatment options for patients. I have come to the conclusion that they largely do have this authority and duty. Though the model of the doctor/patient relationship could use some serious work, patients do not need to know about each option available to them; being informed is important, but doctors are capable of narrowing down treatment options without full patient partnership.

Thaler and Sunstein take this question of the morality of paternalism to a different level. They use examples of a less immediate nature such as retirement plans and cafeteria layouts to illustrate the unavoidable nature of paternalism and just how beneficial it can be, suggesting that we not focus on whether or not paternalism is right in certain cases but how to choose the best paternalistic options.

Though the examples they use are simple, I believe Thaler and Sunstein have a point regarding paternalism in public health. People will most often do what is best for themselves. Public health is the improvement and maintenance of the health of communities, not the individual—thus it is not beneficial to rely upon individuals to make effective decisions in public health.

What is interesting to me, though, is that this argument can then stand as a counterargument in the informed consent and autonomy debate. If individuals do what is in their own interests, isn’t it then moral to leave health care decisions fully up to them? It would seem that if one asked Thaler and Sunstein, the answer would be yes. However, although I am convinced of their argument for paternalism in public health, I believe libertarian paternalism can also be applied to treatment decisions in health care.

Individuals are—to an extent—capable of deciding what is best for them; but in the realm of health care, there is a lot of knowledge that professionals have access to that the average person does not. Even with thorough information—it is difficult for patients to make these sometimes life altering decisions. What is so wrong with a little libertarian paternalism? As Thaler and Sunstein mention in their essay, in everyday situations in which this type of paternalism is used, it is because the people do not want to undergo the hassle of making an initial decision themselves, or they feel as though they are not specialized enough in the matter to make the appropriate decision on their own.

Though I have never before viewed paternalism positively, I believe this essay makes a sound argument for it. This does not mean that paternalism is good; it just means that there are several situations in which it is conducive to efficiency and genuine well-being which should make it acceptable.

Prior to having read some of assigned essays on informed consent, I believed it to be a relatively cut and dry issue. Many of the articles or videos that I have reviewed on informed consent seem for the most part repetitive. Informed consent is important—a good thing. Without policies that detail protocol doctors must follow in regards to their treatment of patients, who knows how a patient may be taken advantage of? After all “doctor knows best”; if the law does not stand to protect the rights of patient, who will? Should a patient be of sound mind and of age, they should be given full disclosure regarding the purpose of a medical procedure, the risks and benefits, probability of risk as well as alternatives to treatment (Brody, 283).  I am not a doctor and thus am only able to see things from the patient’s side of the informed consent debate. It seems simple, really. For a physician to balk at the idea of thoroughly briefing and obtaining permission regarding what happens to their patients’ bodies is ridiculous, right?

If informed consent is so great, though, why do so many physicians see it in many cases as unnecessary or frivolous? In the process of searching for interesting essays or articles on informed consent from a physician’s perspective, I stumbled upon a brief opinion piece by John Kelly IV, an MD who is a regular writer for Outpatient Surgery Magazine. Although the opinion was humorous, I think it did a decent job of shedding light onto the ways in which informed consent may be good in theory, but not in practice. Two of the problems that he focuses on in particular are “nitpicking” and “catastrophizing” (Kelly). The consent form is a legal document and of course important; however, how explicit do they really need to be? It is one thing to list possible risks for a certain procedure—that is for the patient’s benefit. But how detailed does a doctor need to be in describing a surgery that is a part of their daily routine? Forcing doctors to stress and go back over every word in a consent form is a waste of time and if anything, could cause them to lose respect for and patience in the process of informed consent.

The major issue that doctors seem to be concerned about when it comes to informed consent based upon my and other students’ posts seems to be “catastrophizing”: the idea that being too explicit in the risks of procedures, some of which are incredibly low, can lead to discouraging patients to receive the treatment and care that is essential to their health (Kelly). How much information is too much?

I am not at all saying that the cons of informed consent outweigh autonomy, which is the moral issue at the center of the argument. I do, however, believe that there should be a movement to standardize policy across states to make the issue a little less hazy for all involved as well as help to maximize the use of doctors’ time.  Solutions that I can think of include an official electronic database on which the risks of various standard procedures are outlined so that patients can clearly view the costs and benefits prior to giving consent. Another option would be to hire hospital staff or train current staff to specialize in patient relations; people who can to sit down with individuals and talk them through the risks and alternatives, as well as their doctor’s recommendations.  I am not sure what other solutions have been proposed or initiated; but until a larger solution is settled upon, the autonomy of the patient will continue to trump physician convenience and efficiency, and rightly so.