Most Emory students who have taken a health or global health class have seen the CDC video of the staggering obesity trends in the US. If not, you must see it. 30 years ago, the highest rates of state-wide obesity were at 14 percent. Now, in the 2000’s, 14% is an incredibly low, unheard-of percentage of obesity. The rates of obesity currently exceed 30% for some states. Although debatable, obesity is considered an epidemic. When evaluating these CDC statistics, it’s easier to develop a stronger argument for obesity interventions in our country.

Holm asks “When can paternalism be justified?” The obesity rates in America have gotten out of hand. We are trying to combat the obesity trend with a larger focus on exercise and health (in grade schools, college, workplace, gyms, grocery stores, social media, etc.), remodeling the food pyramid, offering programs like weight watchers, etc. However, these are mostly voluntary interventions, and none of these interventions are coercive. As a country, it is difficult to impose mandatory interventions or any measures that represent the hard paternalism that Holm describes. On the other hand, we already use soft paternalism as a means to intervene in obese families; similar to the example of telling a smoker that if you smoke, you die, you can tell a mother that if you feed the child an unhealthy diet he will become obese and develop dangerous health problems. Furthermore, to soften the intervention and its accompanying statements, we can add maternalism to soft paternalism.  For example, just like telling a mother that drinking alcohol during pregnancy can be potentially harmful, we can tell a parent that feeding their child an unhealthy diet can potentially harm the child, leading to preventable diseases like obesity and diabetes. Doctors use their social skills to talk to the parents of an overweight or obese child without sounding too offensive. Arguably, hard paternalism is too harsh, and maternalism may prove ineffective. Soft paternalism, whether or not used in combination with maternalism, is an effective way to introduce a need for intervention. This should most likely represent an intervention from a doctor (a pediatrician probably), or a different professional, such as a dietician.

Should Cost be a Factor?

Additionally, obesity contributes to America’s rising health costs. The CDC states that “in 2008 dollars, these [obesity] costs totaled about $147 billion.” Since then, obesity rates have not improved, and the cost has remained astonishingly high. Holm argues that we should not intervene with people’s lives and their comfortable lifestyles for the sake of money, but this is just the tip of the iceberg. The high costs associate with obesity are only a symptom of the problematic matter at hand. The statistics outlining obesity-related costs beg for attention- in this case, money can be used as a motivational factor for obesity interventions.  Holm also states that “pure economic gain is usually not considered sufficient reason to claim that the common good is being promoted,” but this money comes from our tax dollars, and every person that pays taxes or utilizes the health system in the United States is affected by high healthcare prices. Although intervening would not result in economic gains, it will result in economic relief, since the strain of obesity on our healthcare system will loosen.

I agree that imposing interventions on obese children is paternalistic. However, if the kid is obese, the parents are probably obese, and their parents are probably obese too. The cycle of abuse has to stop somewhere. Intervening while a child is young can possibly break this vicious cycle. By employing well-phrased, maternalistic/ soft-paternalistic discussion, we can introduce interventions in a non-coercive way and possibly reverse some of the shocking trends we see in Obesity trends in the US.

Centers for Disease Control and Prevention. (2012). What Causes Overweight and Obesity? Retrieved from: http://www.cdc.gov/obesity/adult/causes/index.html 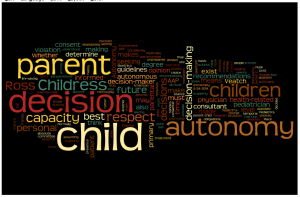 What is the stance on children’s autonomy? How much involvement should a child have in a personal health-related decision? In “The Place of Autonomy in Bioethics,” Childress writes that “the presence, absence or degree of autonomy is a morally relevant characteristic” (Childress 312). This means that if we are deciding on the level of autonomy for a child, leaving them no opportunity for autonomous decision-making could be a possible violation of respect for autonomy.

Chlidress frames it perfectly: “Complexity of respect for personal autonomy.” In children especially, there is a huge grey area for making autonomous decisions with respect to healthcare. In 1995, the American Academy of Pediatrics released recommendations for pediatric decision-making. The AAP divided children into 3 levels of capacity: lacking, developing, and having capacity to make health-related decisions (Ross). The main guidelines regarding children with less capacity for making decisions include “seeking parental permission,” seeking “third-party mediation for parent-child disagreement,” and overruling the child’s decision if it goes against life-saving treatment. This seems fair, assuming that the child is inexperienced in life, unprepared to make an informed decision, and the parent makes a well-informed decision that is in the best interest of the family. For more mature children, the parent becomes a consultant rather than a consenter (Ross).

The major issue with the AAP recommendations is that no guidelines or tests exist to determine the level of decision-making capacity of a child! This means that the physician or pediatrician is the one who decides whether the parent will be a consultant or a primary decision-maker. Of course, if the parent makes a decision that is “abusive or neglectful,” the pediatrician can overturn that decision (Ross). Also, hospitals normally have an ethics committee that handles these kinds of situations, and issues are dealt with on a case-by-case basis.

Another important point to note is that people exist in and through time and their choices and actions occur over time” (Childress 310). A parent may be the primary decision-maker, but the parent must also think about the child’s future- will this child be happy in the future with the decision the parent made? Could this be a violation of autonomy if the child opposed the parent’s decision? What if the child was at an age that the degree of autonomy was sufficient, but the child’s opinion was still ignored? Childress supports this idea by stating “we also have to put that patient’s present consents and dissents in a broad temporal context encompassing both the past and the future” (Childress 310). Veatch argues against allowing the parents full consent, because they may not actually have the child’s best interests in mind- they think about money, parental obligations and their other children, among other things.

We must not abandon personal respect for autonomy, even in the situation that the patient is a child. A final decision should be balanced and thoroughly discussed and understood by all who are involved. Coercion or force should only be used as a last resort (Ross).  In “Abandoning informed consent,” Veatch says “it would be extremely difficult to determine whether the absolute best choice has been made” by the parent, but after reading these articles I believe their decision should be considered above the child’s or the physician’s opinion. 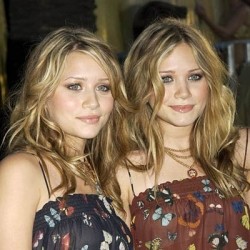 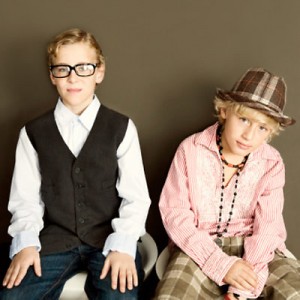 Elliott raises important moral questions about “Uniqueness, Individuality, and Human Cloning,” as the chapter is titled. He argues that it is not a matter of importance that a clone would be genetically identical to his host, because we do not question the morality of genetically identical twins, triplets, quadruplets, etc. However, I think it is important to distinguish the differences and similarities between identical twins and clones. Although we are unable to interview clones to ask of their opinion and personal experience, we can have a general idea of the general thoughts and emotions from genetically identical people. This serves to enrich the argument of the morality of cloning a human.

Although monozygotic twins and clones might seem the same, there are a few important differences to note (from article 1 “Twins: A Cloning Experience” by Barbara Prainsack):

Main Idea: Nancy Segal, a twin researcher addresses that clones “fail to fulfill the three twinship criteria: simultaneous conception, shared prenatal environments, and common birth”. Cloning could one day be an accepted practice because twins provide evidence for the nature vs. nurture theory and individuality despite genetic sameness.

The 17 interviewees understood the difference between being the same person being the same body, and that, for example, cloning a deceased loved one would not result in the same person. “None of the MZ twin respondents reported any problems with the development of individual identities” and uniqueness was not an issue between identical twins. They all felt like individuals, and one interviewee even said that she and her sister do not think they look alike at all! Twins share a very unusual, special bond that is powerful and positive- the twins feel unique in this way.

The twins complained about preconceived notions from outsiders. Sometimes people group them together as one individual, or treat them as though they are two parts of one whole, which annoys twins. Interestingly enough, identical twins would not like to be fraternal twins, and fraternal twins would not like to be identical twins. This probably explains the fear of the unknown rather than the fear of the unnatural, a common argument against cloning. The respondents were against the idea of deliberately creating twins because this entails “ulterior motives” and there would be a persistent “fear of not being ‘good enough’ for the people who had created them”.

What does this mean for further discussion?

In general, identically twins felt positively about their lives, but they reacted negatively to the idea of deliberately cloning. This could be due to a fear of the unknown, because twins felt that genetic sameness is not an actual issue since they develop so differently as individuals. The experiences related to us by the twins could actually help to shift the cloning debate away from violation of uniqueness or individuality and toward  more relevant issues like safety and other consequences of cloning, like physical defects or affected organ growth (4).