Most Emory students who have taken a health or global health class have seen the CDC video of the staggering obesity trends in the US. If not, you must see it. 30 years ago, the highest rates of state-wide obesity were at 14 percent. Now, in the 2000’s, 14% is an incredibly low, unheard-of percentage of obesity. The rates of obesity currently exceed 30% for some states. Although debatable, obesity is considered an epidemic. When evaluating these CDC statistics, it’s easier to develop a stronger argument for obesity interventions in our country.

Holm asks “When can paternalism be justified?” The obesity rates in America have gotten out of hand. We are trying to combat the obesity trend with a larger focus on exercise and health (in grade schools, college, workplace, gyms, grocery stores, social media, etc.), remodeling the food pyramid, offering programs like weight watchers, etc. However, these are mostly voluntary interventions, and none of these interventions are coercive. As a country, it is difficult to impose mandatory interventions or any measures that represent the hard paternalism that Holm describes. On the other hand, we already use soft paternalism as a means to intervene in obese families; similar to the example of telling a smoker that if you smoke, you die, you can tell a mother that if you feed the child an unhealthy diet he will become obese and develop dangerous health problems. Furthermore, to soften the intervention and its accompanying statements, we can add maternalism to soft paternalism.  For example, just like telling a mother that drinking alcohol during pregnancy can be potentially harmful, we can tell a parent that feeding their child an unhealthy diet can potentially harm the child, leading to preventable diseases like obesity and diabetes. Doctors use their social skills to talk to the parents of an overweight or obese child without sounding too offensive. Arguably, hard paternalism is too harsh, and maternalism may prove ineffective. Soft paternalism, whether or not used in combination with maternalism, is an effective way to introduce a need for intervention. This should most likely represent an intervention from a doctor (a pediatrician probably), or a different professional, such as a dietician.

Should Cost be a Factor?

Additionally, obesity contributes to America’s rising health costs. The CDC states that “in 2008 dollars, these [obesity] costs totaled about $147 billion.” Since then, obesity rates have not improved, and the cost has remained astonishingly high. Holm argues that we should not intervene with people’s lives and their comfortable lifestyles for the sake of money, but this is just the tip of the iceberg. The high costs associate with obesity are only a symptom of the problematic matter at hand. The statistics outlining obesity-related costs beg for attention- in this case, money can be used as a motivational factor for obesity interventions.  Holm also states that “pure economic gain is usually not considered sufficient reason to claim that the common good is being promoted,” but this money comes from our tax dollars, and every person that pays taxes or utilizes the health system in the United States is affected by high healthcare prices. Although intervening would not result in economic gains, it will result in economic relief, since the strain of obesity on our healthcare system will loosen.

I agree that imposing interventions on obese children is paternalistic. However, if the kid is obese, the parents are probably obese, and their parents are probably obese too. The cycle of abuse has to stop somewhere. Intervening while a child is young can possibly break this vicious cycle. By employing well-phrased, maternalistic/ soft-paternalistic discussion, we can introduce interventions in a non-coercive way and possibly reverse some of the shocking trends we see in Obesity trends in the US.

Centers for Disease Control and Prevention. (2012). What Causes Overweight and Obesity? Retrieved from: http://www.cdc.gov/obesity/adult/causes/index.html

In Holm’s article “Obesity Interventions and Ethics” he discusses whether or not it is appropriate to have public health policies that intervene to promote a person’s health. In this essay, Holm’s focuses on obesity interventions as the public health issue. Holm states that there are two main problems with this are when and if it is actually justifiable to have such policies that intervene in order to promote someone’s health and if it justifiable to have policies that can negatively affect people but benefits the common good.

Public health policies always have a paternalistic side to them, it’s just a matter of how much paternalism a policy wants to utilize. Holm’s defines three different forms of paternalism including hard paternalism, soft paternalism and maternalism (392). All three forms use different methods, to achieve a certain end. Soft paternalism, which includes “providing unwanted information or foreclosing some options for action”, should be utilized in public health policy (Holm, 392). In this way a specific decision is not forced onto a person, however they are given the information to make better (and maybe easier) decisions about maintaining their health. Some of these policies include changing food labels and changing advertising methods.

Recently the FDA has suggested new changes to food labels in order “to bring attention to calories and serving sizes” which are important in addressing problems related to obesity. Changes include writing calories in a larger font, adjusting amount per serving, and updating the necessary daily values for various nutrients and vitamins (United States). Here is a picture of the differences between our current food labels (right) and the suggested future one (left). 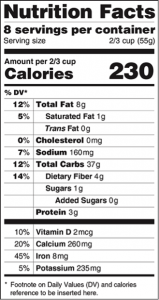 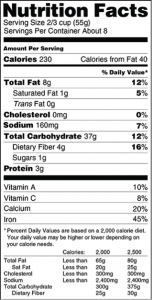 The main goal of these changes is to “make people aware of what they are eating and give them the tools to make healthy dietary choices throughout the day” (United States). Changing food labels will just help people become more aware of what they are eating. Even though the label may be providing “unwanted information” people can still choose to disregard the information therefore it would benefit the common good without negatively affecting people (392).

Chile has also recently changed their food labels to be more representative of the foods contents. The Law of Food Labeling and Advertising was passed in July 2012 and focuses on regulating and labeling critical nutrients, adding warning messages to foods and reducing the amount of food marketing toward children (Corvalán, Reyes, Garmendia, Uauy, 2013).  Chile is still surveying their new changes and augmenting them, however the ideas that they suggested fall under soft paternalism. If the policies prove successful, they could be utilized in United States obesity prevention efforts.

Children are group that is often referenced in paternalism debates. The same is true in regards to obesity prevention. Children are bombarded with food advertisements while watching television, which can increase their consumption of such foods. Andreyeva found that “Exposure to 100 incremental TV ads for sugar-sweetened carbonated soft drinks during 2002–2004 was associated with a 9.4% rise in children’s consumption of soft drinks in 2004. The same increase in exposure to fast food advertising was associated with a 1.1% rise in children’s consumption of fast food” (2011). The increased associated risk may seem small, but you have to think about the number of children that it is affecting and the long-term effects of this exposure. A 2008 study found that the amount of fat on a child directly increased with fast food advertising exposure (Andreyeva, Kelly, Harris, 2011). The same study suggests that reducing the amount of exposure could reduce adiposity by 18% (Andreyeva, Kelly, Harris, 2011The evidence provided suggests that merely reducing the amount of fast food commercials directed at kids could help maintain their current and future health.

All of the solutions that I have suggested have scientific evidence behind it, and have been implemented. The policies also maintain their paternalistic roots allowing no negative consequences to be forced on anyone but simultaneously is improving the health of the general public.